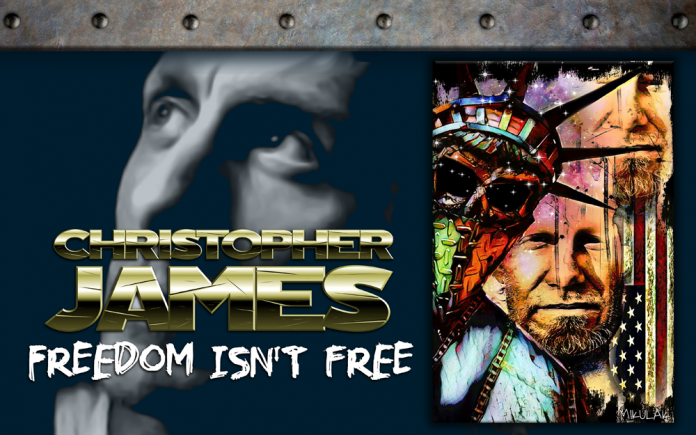 To create is to manifest something outside yourself, fulfilling its own destiny and purpose besides your own. Many struggle with the notion that art serves its own purpose, existing not for the whim of the artist’s message, but interpreted through the eyes of the audience for which it was meant. Christopher James is a metal sculptor famously known throughout the Coachella Valley who holds that sentiment to heart. Christopher’s work has been showcased in places like El Paseo and Downtown Palm Springs, large in stature and displaying a myriad of metal textures in unconventional shapes. 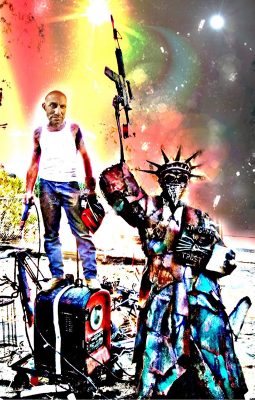 The Morongo Valley-based craftsman has received high remarks for his unique pieces over the decade he has been creating them—from giraffes and owls to menacing dragons. He has received unthinkable news, however, that he never anticipated.

Christopher has been given devastating diagnoses of pancreatic cancer, lung cancer, brain cancer, spinal cancer, liver cancer, and gallbladder cancer—all stage IV and metastasized, meaning the cancer has spread throughout different parts of the body. He is currently seeking treatment out of the desert for his condition. Although the doctor prognosis deems him a “walking dead man,” Christopher is far from giving up the battle of his life.

“It’s been more than I ever could imagine how many friends and family members have come out of the woodwork just to be supportive and be here for me. I’m beyond a wealthy man,” said Christopher. 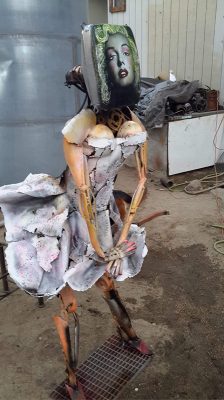 It was 15 years ago at the Renegade Art Gallery, formerly located in Palm Springs, where Christopher’s colossal works were introduced to the Coachella Valley. Christopher would wander out to the desert in Morongo Valley, looking for old pick-up trucks or other abandoned metallic objects to incorporate into a large metalwork.

Christopher considers art to be more than just a passion. He welds 16 hours a day, every day, for seven days a week while working on his statues. His work has been featured in the Palm Springs Art Museum, the Hard Rock Hotel in Palm Springs, and he even owned a shop on El Paseo where he would sell his art exclusively.

One of his favorite creations is his “Lady Liberty” sculpture, consisting of a 13-foot skeletal structure of the Statue of Liberty holding an AK-47 and marked with “In Guns We Trust.” The artwork was not meant to be political in any way, according to Christopher, and instead merely represented his perception of the state of affairs in America. Interestingly enough, the Lady Liberty sculpture also dons a face mask, even though it was made a year before the COVID-19 pandemic began. 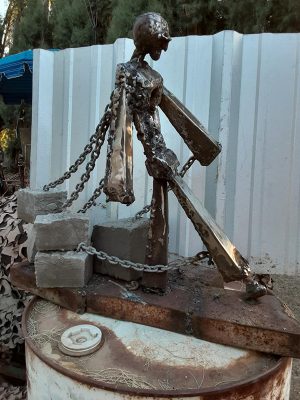 The Lady Liberty sculpture resonated with so many people emotionally, on both sides of the political spectrum. Christopher had witnessed observers and veterans place flowers at the sculpture’s feet in tribute when he positioned it in the middle of a desert road, while others were seemingly upset about its message—a message that Christopher did not intend to create.

“Lady Liberty took on a life all her own. It wasn’t about me or my art; it took on how people were feeling in America. It wasn’t supposed to be politically-charged, just simply asking, ‘how do you feel?’” explained Christopher.

Christopher eventually took Lady Liberty to Washington D.C., as he also hired a film crew to document the journey. Upon arriving at their destination, Christopher was forced to remove the statue under the orders of federal personnel and escorted off the premises, for fear that the presence of the stature would incite an undesirable reaction from people who saw it. A critical essay called “Christopher James: Forging of the Feral” by Brandon R. Burdette, was published that chronicles the D.C. trip, while profiling Christopher and analyzing the relationship between the creative individual and contemporary society. 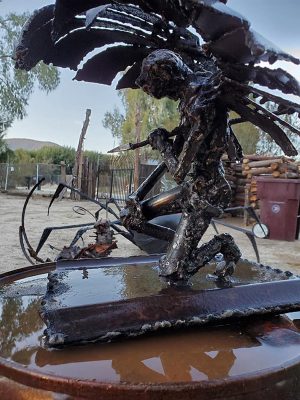 “Art is my one true force. I don’t care if I make a dime off any of it. I just want to see my work out there and have people react to it, even if they don’t like it. I never have a clear picture of what I want to make. I reach my hand in a pile of dirt, and pull out whatever the ether tells me to make. Whatever thought is in my head, whatever nightmare I had in childhood, whatever dreamscape that is formed is already there. It already exists outside of me,” said Christopher.

Graphic artist Peter Mikulak met Christopher 11 years ago when they were both part of a group show at the Renegade Art Gallery. Peter was homeless at the time, and staying at the gallery to prepare for the show. That was when he met Christopher who offered to let him stay at his place instead.

“I think when Christopher creates something, his work is so spontaneous that he doesn’t have a vivid message he wants to tell at the beginning. His art is its own. He had a gigantic giraffe statue just about as tall as a street light at our first show together. I thought his work was easily the best in the whole gallery,” said Peter. 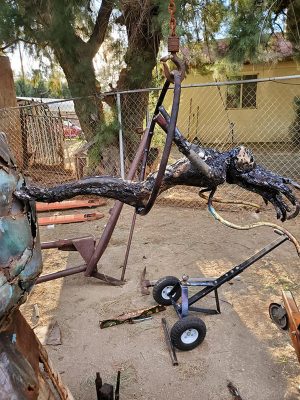 Peter and Christopher would go on to collaborate on a Marilyn Monroe sculpture meant to spoof the Forever Marilyn statue that left Palm Springs in 2014. Their sculpture was later displayed at the Hard Rock Hotel.

“One of the most uplifting aspects of my art career has been with Peter. We always bring each other up even though we come from very different mediums. He’s always been there for me since day one. He constantly pushes me to work outside my box. I can honestly say that without Peter, my career would not be where it is today. He’s the only brother I ever wanted and never got,” stated Christopher. 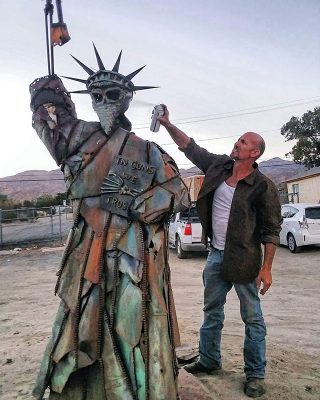 Peter has plans to open up his own store at the Westfield mall in Palm Desert, between the Vans store and Victoria’s Secret. Christopher is having Lady Liberty placed there and will also provide other artwork as well, continuing to support their strong bond and collaboration.

As his artistic legacy continues to unfold even in the midst of a dire diagnosis, Christopher is holding on to his true driving force, and he hopes that those who come across his work in the years to come will see how much effort he put into his creations.

“It’s not the art that I want them to remember, it’s the story behind the art. I’ve spent hours on my work, bleeding and starving, and I want them to see that. Even with my diagnoses, I’m still here making art and promoting my work, and I have zero regrets about my life,” said Christopher.