In the words of Artists Council Board Chair David Hatcher, “For all of us on the Board of Directors of the Artists Council, transitioning to an independent non-profit, after a 50 year affiliation with Palm Springs Art Museum, has been exciting and, at times, overwhelming.  To have had the support of Barbara and Jerry Keller, with their deep knowledge of our history, is an invaluable component to our future success.  We cannot thank them enough.”

Barbara and Jerry Keller created Lulu’s and Acqua California Bistros, from which they have felt fortunate to be able to benefit many charities in the desert.  Barbara started in NY as a theatre director and producer and worked as a business agent for film industry script supervisors.  She served for 8 years on the board of the North Shore Community Center. Barbara had several books published including Film, Tape and TV: Where Do I Fit In? and Orgasmic in the South of France, a personal guide to the Cote d’Azur, where Barbara and Jerry had a home for 18 years. 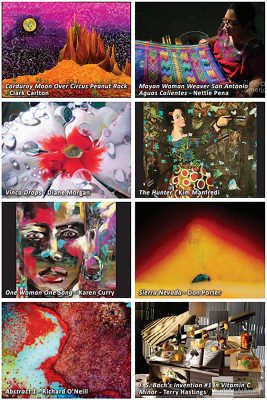 In the desert, Barbara began a relationship with the Palm Springs Art Museum as a docent and eventually became a Trustee.  She was president of the Museum Associates Council and acted as chair for key Museum fundraising events, including the 75th Anniversary Gala. Barbara also served 3 years as Chair of the Board of the Desert Aids Project, where she co-chaired 7 Steve Chase Humanitarian Awards in addition to co-chairing Dinner @My Place. In addition, she also served on the Board of Trustees of the McCallum Theatre and of Jewish Family Service of the Desert.  Barbara was on the advisory board of Sunshine Circle, connecting teenagers with Holocaust survivors, and of Sanctuary, providing LGBT teens a place of safety and stability.  She served as host of Equality California Awards for 2 years.

Jerry Keller has been involved in business publishing for 63 years and is currently President of Keller International Publishing Corp. established in 1882.  Under his leadership, Keller International Publishing grew from 3 to 22 worldwide publications and subsequently divested all but their flagship publication SupplyChainBrain, SupplyChainBrain.com. Jerry serves on the board of the Israel Cancer Research Fund and is very involved in Desert Aids Project and the Palm Springs Art Museum.

Barbara received an Outstanding Volunteer Award from the Association of Fundraising Professionals, the Portia Yerxa Philanthropy and Cultural Heritage Award at Cabot’s Pueblo Museum in Desert Hot Springs, the Vi Felix Award for Outstanding Service Award from Jewish Family Service of the Desert, the Athena Award in Palm Springs, the Jackie Lee Houston Philanthropy Award granted by Palm Springs Women in Film and Television and was honored with a star on the Palm Springs Walk of Fame.  Barbara is recipient of the Humanitarian Award from Equality California, presented by Senator Barbara Boxer.  Barbara received the Business Woman of the Year Award from the 56th Assembly in 2013.

Past AC Chair and current Exhibitions Chair Tony Radcliffe said of the Kellers, “Whether it is helping the Artists Council to raise funds, being the Palm Springs Art Museum’s liaison to the Artists Council, attending our exhibitions, supporting our artists by purchasing their work, catering our events, encouraging others to support the Artists Council, or simply sharing their philosophy of living a joyful, inspiring life – Barbara and Jerry Keller have always been there for us.”

“The Artists Council is proud to celebrate two extraordinary, philanthropic humanitarians – Barbara and Jerry Keller.  We will always be thankful for their support and will always love them.”

The public is invited to celebrate the Keller’s, view the diverse artworks and see which ones won monetary Jury and People’s Choice Awards at ACE November 8 through 22. Museum admission is free at The Galen, Palm Desert, Tuesdays through Sundays 10 AM to 5PM.  All artwork is for sale, with proceeds split between the artists and the Artists Council.

Carole Hatcher, Artists Council Director of Events, commented, “Guests at the AC exhibition opening reception at The Galen will enjoy a welcome wall of cascading flowers in the Faye Sarkowsky Sculpture Garden.  Sunflowers are the theme that will be carried throughout the event as a reminder of the guiding light the Keller family has provided the Artists Council for many years.  Sunflowers turn according to the position of the sun.  On rainy days they turn towards each other to share their energy.  This is our expression of wishing everyone a “Sun Flower” day of turning towards each other, a trait modeled by Barbara and Jerry Keller.”

“In keeping with the core value of long-term commitment to the professional development of our members, the Artists Council continues to offer members a full schedule of events”, said David Hatcher, Board Chair.  “We’re pleased to announce that these offerings include workshops and classes, salons, art book discussions, critique groups and studio tours. Additional member art exhibitions will be organized throughout the year at various venues.”  Classes and meetings are held in the Fogelson Room at Palm Springs Art Museum in Palm Desert, 72-567 Highway 111, Palm Desert.  See the list of activities at artistscouncil.com.