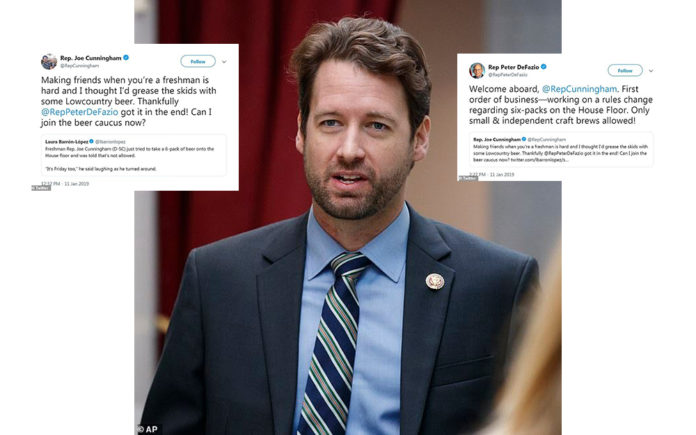 So, last Friday, South Carolina’s newly elected congressman, Joe Cunningham, generated some controversy by trying to walk a six-pack of craft beer onto the House floor. Some people thought it was cute, others were annoyed at the publicity stunt, but no one can question the fact that beer and politics have a long and storied history of going hand in hand.

The Boston Beer Company’s flagship brew, Samuel Adams Boston Lager, isn’t just a cleverly named brew. The real Sam Adams came from a family of maltsters; the people who grow, harvest, and kiln the barley malt used for making beer. He seriously loved the shit out of beer. As did his cousin and fellow signer of the Declaration Of Independence, John Adams. So much so that he put quill to parchment and actually wrote in a letter to his wife:

“I drink no Cyder, but feast upon Phyladelphia Beer, and Porter. A Gentleman, one Mr. Hare, has lately set up in this City a Manufactory of Porter, as good as any that comes from London. I pray we may introduce it into the Massachusetts. It agrees with me, infinitely better than Punch, Wine, or Cyder, or any other Spirituous Liquor.” — John Adams to his wife Abigail Adams on September 29, 1774. He later became the 2nd president of the U.S.

Seriously, how annoyed must his wife have been reading this? Like, he’s been gone for I dunno, pfffft-probably months? And the first letter she gets isn’t him saying he misses her or anything. No, it’s just John Adams gushing to her how the beer in Philly is so rad, thanks for asking. The beer in question was an excellently made, English style dark porter created by one Robert Hare, and the only person that loved it more than John Adams was probably George Washington.

Washington was such a fan of Hare’s porter that he made it a point to have it shipped to the front lines of wherever he was stationed during the Revolutionary War.  After the war was over, he had strict orders to have the porter shipped to his home in Mount Vernon, to be waiting for him during his breaks from governing. George became a well-known homebrewer, with one of his recipes on display in the New York Public library. It’s been said that recreating Hare’s English-style porter was a something he spent years trying to do, and even got close to making his own clone of it.

Frederick Louis Maytag II was a businessman who often served beer during his business meetings to create a more relaxed and level playing field during discussions. I mean, that’s just a nice way of saying he liked to get potential investors and customers buzzed while he pitched sales, but having a beer with someone while you discuss business doesn’t sound as overt as having highballs and martinis I suppose. This is the same Maytag whose name is on washers, driers, and home appliances, so beer apparently was good for his business. His son, Fritz Maytag III, was inspired by his father’s enthusiasm for beer, so much so that he purchased the faded and poorly-rated Anchor Brewing Company in 1965. The company had a reputation for making sour, infected beer, and the American public was in the honeymoon phase of its love affair with insipid, light lager. Maytag learned how to brew professionally, invested heavily in revamping the company’s equipment, and created the first batches of Anchor Steam. Taking inspiration from a style of beer popular in the 1800’s, Maytag turned the brewery around, and recreated a style of beer that is now synonymous with California. To be fair, it’s because he trademarked the historic name of “steam beer”, and everyone else brewing the style had to call it a California Common instead. So yeah, a California Common is the same style of beer as Anchor Steam, and we owe that confusion to Fritz Maytag II. The more you know!

Maytag serves as an inspirational figure for John Hickenlooper; former mayor of Denver and governor of Colorado, who, before delving into professional politics, was simply known as the founder of the Wynkoop Brewing Company. Hickenlooper might have the most impressive political resume amongst contemporary brewers, but it’s not uncommon for beer-related interest groups to routinely seek access to policy and lawmakers to advocate for their needs.

Joe Cunningham’s six-pack stunt last Friday wasn’t just for social media brownie points. His mission was to get the attention of Oregon congressman Peter DeFazio, who co-heads the House Brewer’s Caucus, and secure himself a place as an advocate for craft beer. In a series of tweets to each other, DeFazio welcomed Cunningham aboard, and joked that six-packs should now be allowed on the House Floor, but only if it’s small and independent craft beer. Here’s to the politicians of today who fight to keep the brewing industry alive and well in 209, Prost!