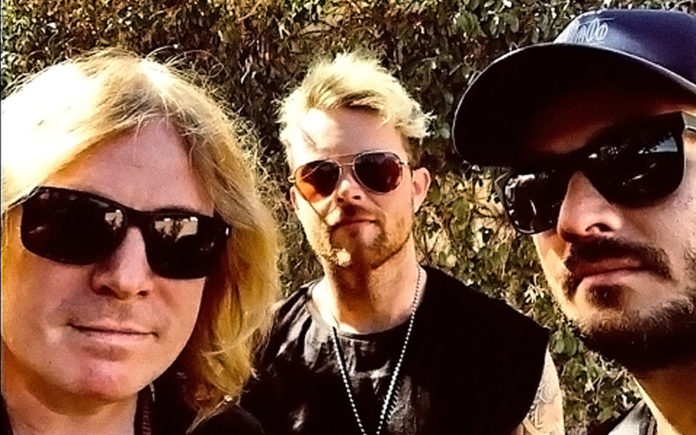 AVON will be performing at The World Famous Red Barn at 73290 Highway 111 in Palm Desert for WAXY’s Bon Voyage and Album Release Party on Friday 9/13 along with San Diego groove trio MEZZOA. The same bands will take their trilogy of power trios to California’s premiere music distributor and store Cobraside Distribution Inc. at 3639 San Fernando Road in Glendale on Saturday 9/14 for a FREE 2 p.m. matinee show and BBQ.

The pair of shows will grant WAXY the proper send-off as they prepare for their European tour in October supporting Betting On Forgetting, the 2019 Coachella Valley Music Award winner for Best Album.

In the wake of the desert rock band LAKOTA, AVON was formed by vocalist/guitarist James Childs, bassist Pasarell and drummer Hernandez who had already played drums on some of the very best desert rock albums. Childs had begun his association with the desert cities in 2003 by joining former KYUSS member Chris Cockrell in Vic du Monte’s Idiot Prayer and then produced their acclaimed Prey for the City LP that was released by Brant Bjork’s Duna Records in 2005.

Touring involved a name and line-up change with Hernandez now on the drums. Vic du Monte’s Persona Non Grata was born signing to Cargo Records in Germany and went on to make four studio albums and two live releases.

Childs achieved success with British rock group Airbus and it was indeed one of the last artists of its kind to sign to the label giant BMG for a deal with a large advance for recording and development before the millennium. He has also worked with Geoff Barrow of the United Kingdom Trip-Hop group Portishead for the release of a rock reconstruction of the hit single Sour Times for release on the American market. They worked together again on North American and European tours in 2012 and ‘13 with atmospheric and experimental artist Beak. in 2007 Childs worked on a project in Los Angeles with Philthy Animal Taylor formerly of Motörhead that was called Little Villains. Childs has also seen success in film and television having written the theme tune to Disney XD’s Kick Buttowski, an animated comedy series that is driven by hard-hitting rock music and earned Childs a Emmy nomination in 2011 for ‘Outstanding Original Song’. He also joined the Australian Showtime production team in 2014 and toured the world twice over with sell-out performances.

Pasarell is a musician form the California desert who cut his teeth with Palm Springs band WAXY that has worked with the likes of John Garcia and toured with successful artists such as Volbeat. WAXY later went on to tour with Kyuss Lives in 2011. In 2005 he toured Europe on the same bill with Childs in Vic du Monte’s Persona Non Grata and again in 2007 with Childs and his UK group Airbus. Pasarell joined L.A. based Honky Tonk Punk band Devastating Karate in 2007 releasing a string of albums and touring America. Pasarell first joined Childs for the LAKOTA project in 2014 and also played bass with Vic du Monte’s Persona Non Grata prior to the formation of AVON.

AVON released their debut LP Mad Marco on Spira Records in 2016 and have completed four tours in Europe including Spain, France, Italy, Austria, Germany, Belgium and the UK. They also appeared at the prestigious Desertfest London and Berlin in 2017 supporting their H42 Records release Six Wheeled Action Man Tank.

In 2018 AVON released their Dave’s Dungeon LP on the prestigious Heavy Psych Sounds label complete with an animated desert scene tribute video for their single “Red Barn” and were soon back on the road. However, 2019 marked a new era with Hernandez stepping down and the band continuing with amazing Australian drummer Kyle Thompson who Childs worked with during his time on the road with Showtime in ‘14 and ‘15.

Having already worked together in the studio and a new LP in the cards, the band’s rapport is evident!

Coachella Valley Weekly spoke with Childs as he was mixing the 2nd Philthy album with Alan Davey from Hawkwind on bass that will be out on Cleopatra Records in 2020.

CVW: AVON has been on hiatus since mid-2018. What are you looking forward to most in your return?

Childs: “We’re especially looking forward to the two shows with Mezzoa and WAXY as Avon has not played together since June 2018 and these gigs will be the very first shows with our new drummer Kyle Thompson.”

CVW: After these two SoCal shows, what’s next for AVON?

Childs: “Kyle is flying in shortly to lay down takes for a new album that we aim to release in Spring 2020. We are planning to tour the record in Europe next Spring and will do a West Coast tour including dates in SoCal to support the record.”

CVW: The snippets you shared with me has that classic punk sound with some pretty heavenly vocals. What can new listeners expect from AVON?

Childs: “People who have never heard AVON can expect a thick and raw growl from the band with plenty of song and melody to keep the foot tapping. We like to mix things up a bit with atmospherics leading into Punk-Grunge and Classic Rock sounds.”

CVW: You have your hand in production as well and have a long history of handspun music.

Childs: “I produce the records at my studio in Los Angeles that we affectionately refer to as ‘Stujo’. All the Vic du Monte LPs were completed there as well as AVON and Little Villains recordings. I used Robbie Waldman’s former studio ‘Unit A’ in Palm Springs several times for drums, most notably with Phil Taylor from Motörhead for the first Little Villains album and Airbus. I have also recorded at Alfredo’s house in Palm Springs because I liked the way the drums sounded in there for Vic du Monte’s Persona Non Grata material. Production is always in-house.”

CVW: You have a great animated video for the song “Red Barn”. Who creates the videos?

Childs: “I made the cartoon for “Red Barn”. Charles and I have made videos for AVON songs. Charles made the video for Gotta Go which are all on YouTube. Charles made a nice video for the song Bleed Free for our original band LAKOTA and we filmed a video for a song called Model at Robbie’s Unit A too!”

CVW: What’s your history with the Coachella Valley?

Childs: “I’ve been coming out to the desert for years, in fact shortly after I arrived in the U.S. I met Chris Cockrell and after a sweaty bar brawling Vic du Monte’s Idiot Prayer at Peanut Gallery I joined the band and produced the Prey for the City (2001) album that Brant Bjork put out on Duna. Alfredo joined on drums and we toured the U.S. and Europe.”

CVW: What more can you share about Robbie Waldman and Waxy?

Childs: “We were back on the road as Vic Du Monte’s Persona Non Grata in October ‘05 and ‘06 where I first met Robbie and Charles from WAXY, and we’ve been friends ever since. Charles departed WAXY in 2006 and pursued his music with Devastating Karate. He and I formed LAKOTA in ‘15 with Sean Landerra who also played in WAXY.”

CVW: Alfredo Hernandez is considered a desert rock pioneer and his time in KYUSS is well-documented. What was it like to have him in your band and what can you share about your new drummer?

Childs: “Alfredo joined Charles and I for AVON and we also kept our hand in playing with Chris as Persona Non Grata. Alfredo obviously contributed much with his unique machine-like style and has always been a pleasure to play with, but it was time to move on to a new era with AVON. That’s where Kyle comes in to play. He and I have played some serious big shows around the world together and I always like familiarity when it comes to musicians. He’s stoked at the opportunity to rock out with us. So yeah, I’m looking forward to many shows, a new album and see where the band grows!”

Animation video for “Red Barn” from the LP Dave’s Dungeon using sketches from tour piecing together a story from the California Desert scene, it’s key players and venues during the mid-00’s.