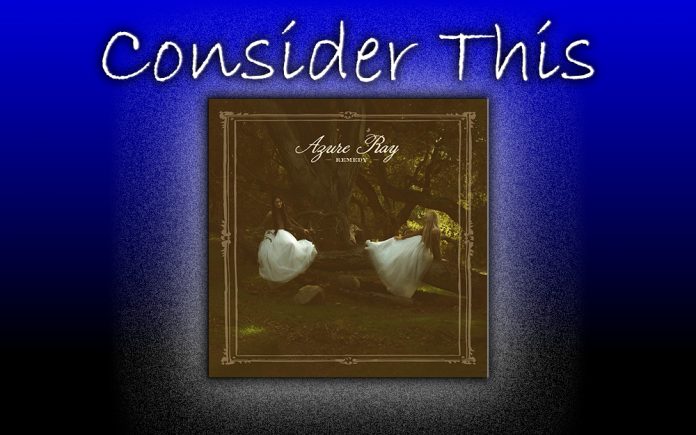 Maria Taylor and Orenda Fink have been music together forever. Childhood friends, the Birmingham, Alabama natives began collaborating professionally while both were attending the Alabama School Of Fine Arts. Their first band, Little Red Rocket, managed to release a couple of albums on the Geffen label in the late ‘90s. When the group disbanded, the pair relocated to Athens, Georgia.

The swingin’ college town boasted a thriving music scene where heavy-hitters like R.E.M. and the B-52’s got their start, as well as lesser-known (but nonetheless influential) acts like Pylon, Love Tractor, Flat Duo Jets, Vic Chesnutt and indigo girls. It was there Maria and Orenda formed Azure Ray and signed with Warm Records. Coping with the death of her boyfriend, Maria channeled her grief into the music and their self-titled debut arrived in early 2001. Their sound, a quirky collage of acoustic Electronica, Folk and lush harmonies, was immediately embraced by the cognoscenti. Doubling down on the same winning formula, they released a stunning EP, November in early 2002 and followed up a couple of months later with their second long-player, Burn And Shiver.

A little more than a year later, Azure Ray had split Warm Recordings for the slightly greener pastures of Saddle Creek Records. The Omaha, Nebraska label was home to critically-acclaimed artists like the Faint, Crooked Fingers, Now It’s Overheard, Sorry About Dresden, as well as Conor Oberst’s myriad projects (Bright Eyes, Desaparecidos) and Rilo Kiley. Azure’s third effort Hold On Love felt fleshed out and focused, satisfying critics and fans alike. Suddenly, their songs became the go-to music for scoring knotty emotions on good TV series (“Six Feet Under”) and popular ones (“Grey’s Anatomy”). They also popped up regularly on movie soundtracks like “The Devil Wears Prada” and “Shortbus.”

In 2004 Azure Ray went on hiatus, allowing Maria and Orenda an opportunity to stretch their wings, by writing and recording their own solo albums as well as collaborating with other musicians Four years later the pair reconvened for a one-off performance at the venerable Troubadour in Los Angeles. Around the same time, they appeared on KCRW’s taste-making program, “Morning Becomes Eclectic,” and announced that they’d reformed on a semi-permanent basis. Their fourth record, Drawing Down The Moon appeared two years later.

In between solo stuff (Maria’s released seven albums and four EPs on her own and Orenda has recorded three long-players and an EP), the duo have checked in as Azure Ray with a couple of EPs, 2012’s As Above, So Below and 2018’s Waves. Now they’ve returned with their first full-length album in 11 years, Remedy.

The album flutters to life on the opening cut, “Swallowing Swords.” Maria and Orenda’s hushed harmonies, as intime as ever, are matched by plinky-plunky piano for the first couple of verses until a Karen Carpenter-esque drum beat and pulsating synths kick in. The lyrics unspool a series of rhetorical questions like an anxious mantra; “What do you dream about when you’re not swallowing swords? When did you leave home? Where are you going? Will you know it when you see it? How does it end? Airy synths and an accelerated tempo on the break offsets the increasingly urgent tone.

There has always been an intriguing, otherworldly quality about Azure Ray, an intangible grace. That feels especially true on both “Phantom Lover” and “Bad Dream.” The former is equal parts spectral tone poem and dreamy Pop-scape. Gauzy vocals are bookended by phased guitars sinewy bass, spatial keys and a clipped, kick-drum beat. Swooping harmonies wrap around yearning lyrics that call out to a supernatural swain; “Where can I taste the nectar of love, sweetened like honey, to erase the fear of the bitterest pill that our hearts were meant to break, you say Baby, it’s alright.” A soothing guitar solo on the break almost assuages the heartache.

The best tracks here, cryptically and covertly speak to recurring themes of chaos, tragedy and anxiety. Atmospheric keys and subtle strings lattice over plangent acoustic notes and lonesome pedal steel on “Grow What You Want And How Wild.” The minor key melody cradles melancholy questions like “Don’t I love you, don’t you care?” Then quietly answers with this enigmatic haiku; “Reach mountain from the ocean and rise, split earth and broken pavement, grow what you want and how wild.”

There’s a gossamer grace to “Already Written.” The lithe melody is fueled by rippling guitars, thrumming bass, a surfeit of keys and a heartbreak beat. Something of a restless farewell, the lyrics steer around the rocky shoals of loss and grief; “I know I’m not done living, there’s things I started I still have to finish, just how do I navigate.” But rather than wallow in the mire, they chart a course for a new tomorrow; “My heart still skips a neat when your name gets mentioned, my love won’t die it just changed its intention, that’s how it will stay.”

“29 Palms” shimmers to life like aural mirage. The opening verse juxtaposes a spare and bare-bones arrangement with fantastically rich and ornate lyrical imagery; “Broken like a mirror with pieces of you and me, reflected light fissures, trial of the century/They stand at the forefront, frothing and philistine, before the sun sets you’ll forget you were fashion in Spring.” About a minute in, the melody and arrangement shifts, locking into a lilting Waltz rhythm, accented by strumming guitars, gilded pedal steel, wheezy strings and upright bass. Maria and Orenda’s blithe harmonies envelope opaque lyrics that connect ancient Greek mythology and modern warfare, occasionally offering up this cryptic caveat; “You can only be hurt by what you love.”

Meanwhile there’s a measure of empathy and optimism coursing through “Desert Waterfall.” The instrumentation here is a wash of keys, wily bass lines, and cascading guitars, punctuated by downy-soft programmed drums. Azure Ray easily admit “We’ll never be as free as we used to be, but they say roots will give you strength, so I’m waiting….this worry from my eyes was taken by surprise, and I was ready, I am ready.”

Other interesting songs include the shivery urgency of “The Swan” and the title track which searches for some authenticity in this bankrupt world. The record closes with “I Don’t Want To Want To.” Prickly guitars, whispery keys and angular bass lines are wed to a click-track rhythm. Lyrics offer a final cri de Coeur by giving voice to all those internal insecurities; “Could love keep us from changing, could love keep us from fucking this up?”

20 years after their debut, Azure Ray’s music continues to resonate and inspire. Their influence is keenly felt on recent releases from Taylor Swift and Phoebe Bridgers, just to name a couple. Remedy is suffused with regret and shot through with optimism. It may not cure what ails you, but it provides some much needed, musical anodyne, and a momentary respite from this cataclysmic world.