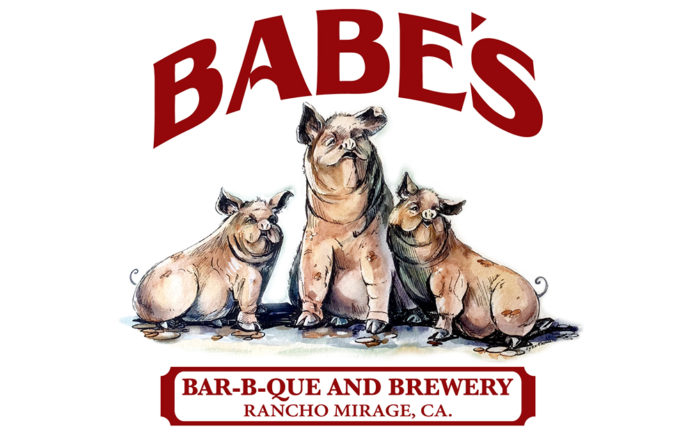 Dedicated wine folk typically enjoy rounds—all around—when it comes to beverages.  Add to the affair with some imaginative food pairing and we’re interested all the more. We recently enjoyed ourselves at a recent seven course Brewmaster’s Dinner at Babe’s Bar-B-Que and Brewhouse at the River in Rancho Mirage.

Most micro-brew fanatics in this valley for over a decade have been over to the brewery at Babe’s seeking suds and enjoying the grub.  Note the fact just three years ago, the brewery was awarded the California State Fair’s Golden Paddle, as the best overall brewery in California.  Babe’s came out on top in a field of over 300 breweries. And this year the restaurant gained favor as the “best BBQ in the Valley” by three reader choice awards polls.

The Palm Springs Travel Guide has written, “With a focus on good barbecue and good beer, Babe’s is a popular Western-themed restaurant in Rancho Mirage. From St. Louis-style ribs to pulled pork sandwiches, Babe’s has you covered on all the barbecue fronts. You’ll find pork, beef and chicken options in a variety of finger-licking good styles, as well as home-style sides like cornbread, coleslaw and sweet potato fries. Don’t miss the homemade rhubarb pie, which is made fresh in the kitchen. The bar also focuses heavily on craft beers from the award-winning in-house brewery, and, from top breweries around the world. Babe’s Honey Blonde is one of the most popular beers, while the Blackfin lager pleases more discerning beer palettes.”

And a little more catching up to do: Donald “Lucky” Callendar, son of the original owner, has recently re-dedicated his time and presence in the operations at this iconic eatery.  A month or so ago, a gathering of business and media peeps were on hand to celebrate this event with food, fun, and festivities which included witnessing a multi-ton bronze pig being hoisted way up in the air to its resting location near the entrance of the restaurant. (Lucky directed the final positioning of the heavy art-piece, and we found him true to his name as he fortunately avoided the sway of the pig!)

Setting up the first Brewmaster’s Dinner was definitely on Lucky’s mind for the new dining season. Prior to the tasting, we spoke with Lucky about his own experiences of brewing beer. It was certainly his pleasure to showcase the new items added on Babe’s menu and pairing them with stellar beers.

A shout-out to the chefs, Brian Lopez Ortiz, Omar Resendiz and Joel Estrada prepared a delicious menu.  Some of our favorites were the fresh roasted beet salad, paired with Hazy Grapefruit IPA, the crab cake slider with lobster mac & cheese, paired with Vanilla Blonde Ale and the wild game sausage sampler, paired with the Peach Scotch Ale.  The rabbit sausage was especially delicious.

Continuing a Legacy: On the up-dated Babe’s website, babesbbqandbrewhouse.com where you can subscribe to emails of up-coming culinary events, Lucky shares his memories and experiences with his dad which gives him perspective to going forward.

For instance, he begins his tribute, “Growing up in Palm Desert, Babe’s was a large part of my life. I remember the moments I shared with my dad as a child exploring the restaurant designed to his liking and all the ‘experiments’ he brought home from the kitchen.”

“There are bar-b-que styles from every part of the U.S. and world, from Texas to Korea. The secret is in the smoking process, unlike many that rely on heavy sauces or rubs.

Sweet, fresh, made-from-scratch, chef-created and taste-tested with his personal stamp on it.  Try our Baby Back Ribs, Pulled Pork Sandwich, Boneless Beef Short Ribs, Callender’s Skillet Cornbread and fresh pies and shortcake, made daily in our kitchen. Complement your meal with one of our ice-cold, award-winning micro brews, perfect with any entree or by themselves.”

Here are some tasting notes on four of Babe’s most famous and awarded brews:

Belgian Vanilla Blonde Ale, Alc, 7.5%  with wheat, and vienna malts. What makes this blonde so special is the presence of the belgian yeast, all natural raisins, and three
different additions of whole Madagascar bourbon vanilla beans.

Blackfin Lager, 4.8%  This is Babe’s Flagship beer with the most accolades. This dark German-style lager drinks like its lighter counter parts. Light-bodied crisp lager is hopped just long enough to add balance with no bitterness while subtle hints of caramel and toast add accent.

Honey Blonde Ale, 5.0%  Golden in color with flavor and aroma of the real California Honey that it’s brewed with, this is a light, smooth beer with a subtle finish from Orange Blossom Honey.

Babe’s takes 2 of the hottest things in America and brings them together. Palm Springs & IPA! Think of this easy drinking IPA as a lifestyle beer. Not technically west coast but definitely So -Cal! 6.8% ABV with a smooth 65 IBUs on the hop meter.

Hot off the Press! In January, Babe’s will be the “Official Beer Purveyor of the Palm Springs International Film Festival” and its beers will be served at the festival’s filmmaker’s lounge and several industry events during the 10-day run. This is a first for a local brewer to be participating at the festival!

At the recent event, we actually had the time to read through Babe’s vast menu of items.  Also one can create a pizza or calzone, and there are “signature” homemade tamales that our waitress kept raving about.  I think we’ll try those for Christmas! Cheers!