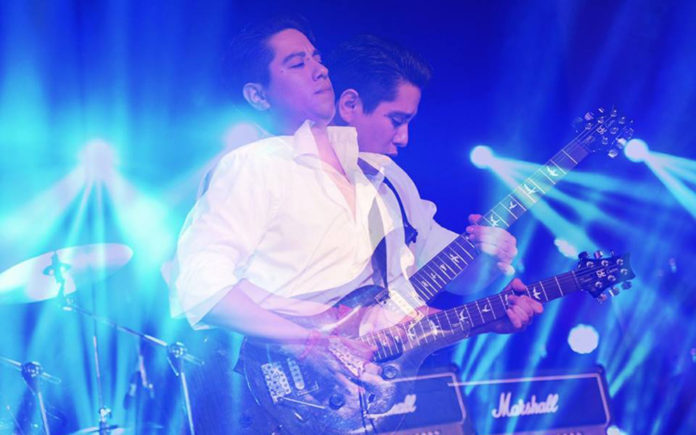 What newcomer to the scene managed to garner 3 nominations in 3 different categories in the Coachella Valley Music Awards? That would be Alex Santana. He was nominated and won the award for ‘Best Jazz Vocalist” as well as ‘Best Guitar’ with his oh-so-cool style of guitar and vocals.

Additionally, his band Irie Junctions was nominated for Best Reggae and will be performing at the Desert Oasis Music Festival in October, produced by Empire Music Venture. He’s ecstatic about having one of his favorite bands, Los Lobos, on the bill. 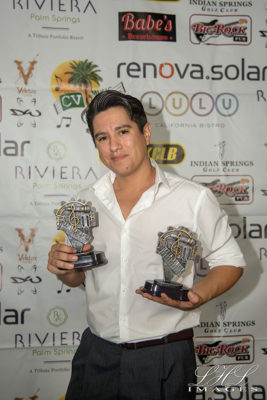 How did this handsome young man rise to this level of stardom so quickly in the desert? Well, looks can be deceiving. Alex has a background with bands going back to 2008 when he formed his own 10-piece Latin band.

After dealing with all the issues of that he decided to go solo. He has quickly risen in stature. He’s a regular at Wang’s (one of our favorites) every Tuesday and Thursday nights from 5pm-8pm, you’ll find him there along with a great bar menu and the meanest mai tai in town.

His versatility in music shows itself in the reggae band Irie Junctions. They’ve opened for big names including Pato Banton and Black Uhuru, in his former group, Tribe O, they opened for Steel Pulse and Big Mountain.

He’s hosted a number of the Palm Canyon Roadhouse Sunday night jams and is playing a new venue in the Viva Cigar Lounge at the River, Saturdays from 9 to midnight on Aug. 5, 12, 19, and into September.

He’s finishing up his new CD, which will be out this fall. It’s a mix of retro, R&B, and Motown. He’s also featured in a TV commercial for Wang’s. The owner likes Alex and wants to help boost his career. This well dressed, polite, handsome and talented young man has a big future ahead of him. We look forward to watching his progress. Congratulations to Alex Santana.