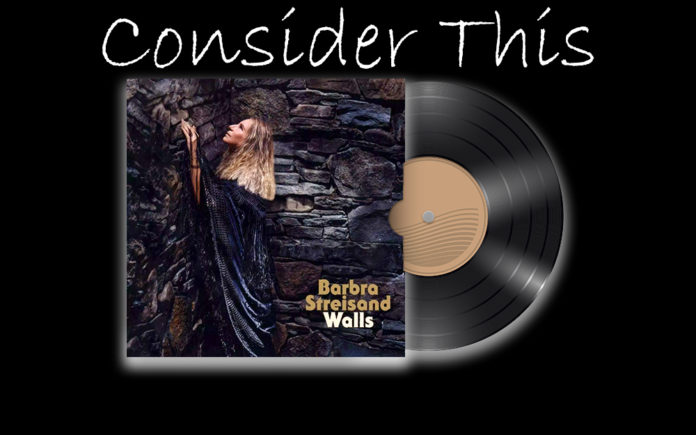 Barbra Streisand is a force of nature. Love her or hate her, she has defied the odds and managed to remain a popular artist for nearly 60 years. She’s a singer, an actress, a songwriter and a director. She is an EGOT winner, that’s someone who has won the following awards; an Emmy a Grammy, an Oscar and a Tony, that’s a pretty exclusive club. She has also just released Walls, her 36th studio album.

Born in 1942, Barbra was raised in Brooklyn, New York. Her mother possessed an operatic voice, and contemplated a singing career but never pursued it. Her father was a teacher who died a few months after Barbra was born. That loss deeply affected her throughout her life. Early on, she discovered her singing talent, but by her teenage years, she had a higher ambition. Marlon Brando was her idol and she wanted to become a serious actor. Singing was a means to an end.

By early ‘60s she was taking acting classes and earning her keep by singing in the Greenwich Village clubs. Her first major gig was opening for Phyllis Diller at the Bon Soir. Even as she gained accolades for her singing, people advised her to alter her very distinctive nose and change her name to something more white-bread like “Joanie Sands.” (Joan is her middle name) She ignored the first piece of advice and slightly modified her first name, removing the second “a” in Barbara.

Rather quickly she acquired a manager, Marty Erlichman (who remains her manager to this day), she began appearing on Broadway in “I Can Get It For You Wholesale,” and performing in de rigueur television shows like the “Tonight Show,” “Ed Sullivan” and Judy Garland’s short-lived variety show where the pair famously duetted on “Happy Days Are Here Again/Get Happy.” She signed with the Columbia label and released her first album in 1963. A few years later she was starring on Broadway as infamous vaudevillian Fanny Brice in “Funny Girl.” From there, her career skyrocketed.

Not only did she make her movie debut in the film adaption of “Funny Girl,” but she received an Academy Award for Best Actress, (tying with none other than Katharine Hepburn). From there, she went on to record more albums, star in more movies and television specials. She and her husband, actor Elliott Gould, welcomed their son, Jason, in 1966, but they divorced by 1971. Meanwhile, along with fellow actors, Dustin Hoffman, Steve McQueen Paul Newman and Sidney Poitier, she formed First Artists productioncompany and became more politically active in the Democratic party.

In the ensuing years, Barbra has acted in some classic films like “What’s Up, Doc?” and “The Way We Were,” and some abysmal efforts (“Up The Sandbox, “For Pete’s Sake” and “The Owl And The Pussycat”). By the mid-seventies she began to push for more creative control on her on film sets. She had a vision for her Rock N’ Roll remake of “A Star Is Born” and she clashed with the director. It was around this time she gained a reputation for being “difficult.” She drily noted at the time, if she were a man, that label would have been “Perfectionist.”

One of the few women to break Hollywood’s glass ceiling, she made her Directorial debut and starred in the 1983 box office smash, “Yentl.” It was a passion project she began shepherding in the ‘60s. A few years later she repeated the process with “The Prince Of Tides.” Another critical and commercial hit, it garnered seven Academy Award nominations including Best Picture. Tellingly, Barbra was snubbed in the Best Director category. In 1996, once again she directed and starred in “The Mirror Has Two Faces” a commercial hit despite mixed reviews.

Musically, Barbra has occasionally challenged herself, breaking free from the constraints of the classic American Songbook. In the ‘70s she covered contemporary artists like David Bowie, John Lennon, Carole King, Paul Simon and most winningly, Laura Nyro. She also began writing her own songs and won the Academy Award for Best Song with “Evergreen,” the theme from “A Star Is Born.”

As the 20th century wound down, she had found love with actor James Brolin and the couple married in 1998. She continued to make albums and tour sporadically. Nearly 10 years ago she shook things up by enlisting Jazz chanteuse Diana Krall to produce Love Is The Answer; an intimate collection of Jazz standards that pushed past her usual gauzy Easy Listening music and received unanimous critical acclaim. Of course, it sold well, reaching #1 on the Billboard Top 200. This record-breaking achievement made Barbra Streisand the only artist to have a number one album in America in five different decades, (and her 51st gold record overall).

After that break with tradition, it was business as usual for her next few albums; a collection of songs from her favored lyricists, Alan and Marilyn Bergman, plus a couple of predictable duets albums, Partners and Encore: Movie Partners Sing Broadway. Naturally, both hit #1 on the charts. Now Barbra has returned with her 36th album Walls. This time out she felt, not inspired, but galvanized by the current divisive political climate. She teetered between terror and heartbreak over the actions of the Cheeto-colored despot that currently occupies the White House. This, in effect, is her protest album.

Walls opens with the one-two punch of “What’s On My Mind” and “Don’t Lie To Me,” both co-written by Barbra. Wordless vocalese crests over swirly modal keys and courtly Spanish guitar as Babs settles in to tell us exactly what’s on her mind. Her still supple soprano caresses lyrics that seem ripped from the headlines; “I’m lying here awake, photographs flash through my mind, if I could only get some rest, I toss and turn instead/Oh I think of every child, how they should have the right to shine, never lose their innocence, each one born divine.”

The source of her insomnia is obviously the recent edict enacted by Cheeto Von Bone Spurs to separate children from their parents as families illegally crossed the border. But she still has faith; “Some trees learn to bend, that’s how they survive, maybe we must learn from them to keep our hopes alive.” The soothing arrangement and lush orchestration can’t restrain her outrage.

“Don’t Lie…” opens tentatively with searching piano chords that are quickly eclipsed by programmed keys and propulsive percussion. There’s a surprising Electronica edge to the tune that accentuates the censorious vibe of the lyrics. In calmer days, the listener might assume Barbra was taking a duplicitous lover to task, but it is crystal clear she is Addressing the Oval Office occupant who regularly achieves a “Pants-On-Fire” score on PolitiFact’s “Truth-O-Meter.” Her mien veers from conversational to confrontational, lambasting his venal and transparent perfidies; “How do you win if we all lose? You change the facts to justify, your lips move but words get in the way.” She even manages to mock his epic narcissism and nonexistent sense of style; “You can build towers of bronze and gold, you can build castles in the sky, you can use smoke and mirrors, old clichés, (but) not today.”

Barbra revisits a couple of ‘60s Rock classics, but the results are mixed. “Imagine/What A Wonderful World” mashes up John Lennon’s timeless plea for peace and understanding with Louis Armstrong’s subtle appeal for racial tolerance. The verses dovetail nicely and Barbra’s vocals execute a series of melismatic leaps, but ultimately the song just kind of lays there.

“What The World Needs Now,” the Burt Bacharach-Hal David powerhouse that Jackie DeShannon took to #7 in 1965 gets a subtle but strange makeover. First, she jettison’s the original’s waltz-time, initially locking into a slow, elegiac groove. But on the break the tempo shifts gears accelerating into a Samba-fied rhythm and adding distracting vocal assists from R&B crooner Babyface and Yacht Rock demi-god, Michael McDonald. It might have been more effective if she had stripped the tune down and kept the focus on her vocals.

The songs that are more effective here include the mostly acoustic “Better Angels,” which references Abraham Lincoln’s infamous quote that appeals to “the better angels of our nature.” Another co-write from Barbra, “The Rain Must Fall” unfolds slowly before easing into a propulsive rhythm. A blistering rebuke of the Prevaricator-In-Chief, it pulls no punches, noting “Facts are fake and friends are foes, and how the story ends nobody knows/Cruel is kind and lost is found, and truth goes ‘round and ‘round and ‘round and ‘round.”

“Love’s Never Wrong” is a simple, but protean ballad that makes the case that love transcends race and gender; “No one can tell what’s right for you, or how two hearts can be one.” Meanwhile, she resurrects “Take Care Of This House,” from an obscure Leonard Bernstein/Alan Jay Lerner musical, “1600 Avenue.” The cinematic orchestration can’t gloss over bleak lyrics that offer a metaphor for a nation no longer indivisible; “Here in this shell of a house, the house that is struggling to be/Falling through the hall, coming straight through the wall, is hope staring down at me.”

Other interesting songs include the anthemic title track and “Lady Liberty” which exhibits a “Don’t Rain On My Parade” tenacity. The album closes with a new version of “Happy Days Are Here Again.” Revisiting her 55 year-old hit, Barbra echoes Joni Mitchell’s recalibration of “Both Sides Now.” Youthful yearning and hopeful exuberance are tempered by a measure of wisdom and gravitas.

Almost six decades in, having sold 68.5 million albums, received 10 Grammy Awards, and two Academy Awards, Barbra Streisand has record making down to a science. While she takes chances here lyrically on Walls, one wishes she would move out of her comfort zone musically. Imagine the possibilities had she enlisted a producer like Rick Rubin or T-Bone Burnett? Still, she has made an elegant record that speaks truth to power.