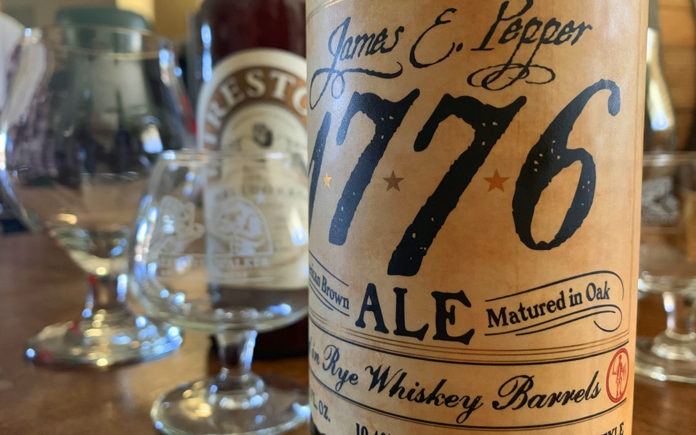 I’ve spent the last several installments guiding you through the history of flavored malt beverages and how they relate to the hard seltzer trend that is now in vogue. Light, spritzy, fruity flavors have dominated the adult beverage industry this past summer, with ciders and fruited, sour ales sharing popularity throughout the warm season.  But much like the seasons, trends change. Cooler weather and shorter days mark the beginning of fall, and this is the perfect weather for barrel aged beer.

I mean, realistically, beer had been fermented and stored for centuries in wood before someone had the bright idea to fashion vessels out of steel. Wood is porous, it swells and shrinks with temperature changes, and is difficult to clean. But even with the advent of steel aging, wooden barrels have their place. You’ll lose a portion of your beer to evaporation, the flavor might likely suffer from oxidation, and if not cleaned carefully, the microbes living between the barrel staves can infect and ruin the beer. The only upside to all of those negative possibilities is the incredible complexity of flavor that barrel aging can add. 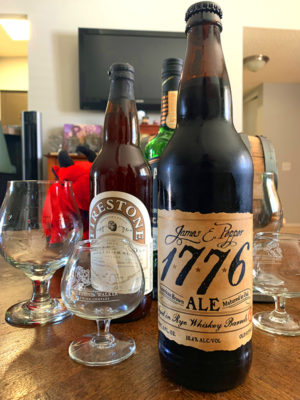 Goose Island Beer Company is widely credited for reviving the barrel aged beer tradition in America, when in 1992, brewer Greg Hall filled 6 empty Jim Beam barrels with his Imperial Stout. Poured at festivals and at Goose Island’s taproom, bourbon barrel aging instantly caught on with fans who enjoyed all of the new flavors introduced by the marriage of rich, decadent beer and earthy, complex wood. The entire barrel had soaked up a small portion of the whiskey it once held, seasoning the wood and infusing it with the caramel and vanilla notes of bourbon whiskey. Wood itself is made of many compounds, one called vanillin gives off vanilla notes to whatever is stored inside of a barrel. White wines are usually aged in new white-oak barrels, where the vanillin leeches out of the wood and creates the prominent vanilla flavor so present in a chardonnay. California white wines have the dubious reputation of being so heavily oaked that the flavor tends to suffer, beers that are matured in used barrels tend to benefit from the secondary and lesser compounds that haven’t been leached out of the wood yet, and they compliment certain types of beer perfectly.

Goose Island’s Bourbon County Stout set the benchmark for barrel aged beers, and many other breweries soon took note and began using the method themselves. While vanilla notes come most prominently from barrel aging, so do flavors of caramel, toffee, mocha and honey. Many people compare the flavors of vanillin to that of young coconut, with different styles of beer each having certain characteristics complimented by the wood tones. The flavor of wood itself is unique, tasting the way sawdust smells. Overpowering and out of place in simple and delicately flavored beers, there is a reason no one bothers oaking a hefeweizen. A strong malt backbone benefits the most from barrel aging, but not only stouts benefit from the technique. Firestone Walker’s Helldorado is a blonde Barley Wine that draws notes of honey, coconut, and vanilla from the wood the same way a white wine does. With a flavor reminiscent of bourbon-glazed graham crackers, Helldorado has a dense, concentrated breadiness that can be appreciated by all barrel-aged connoisseurs. 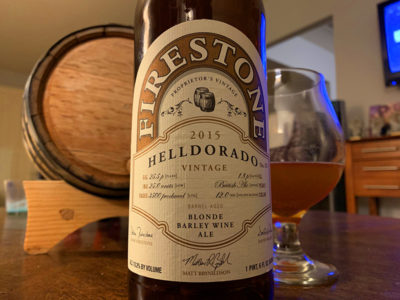 James E Pepper is a whiskey maker who had sold many of their used bourbon barrels to beer makers before deciding to make a beer themselves. Deciding on an Imperial Brown style of beer rather than a stout or a Barley Wine, the caramel and toffee notes take center stage, with nutmeg, chocolate-covered fruit, and spice being prominent flavors in their 1776 Ale. There are no sharp, coffee-like flavors to be found in a brown ale, the flavors being more toasted than roasted. The one unifying theme in styles of beer that benefit from barrel aging, are high ABV’s (alcohol by volume). The mighty expectation to the rule is Firestone Walker’s DBA, or Double-Barrel Ale.

A British-style pale ale, DBA blends a portion of the batch that’s barrel aged back with the rest of the batch that’s steel aged, allowing for just hints of the oak character to peek through. At just 5% ABV, this beer allows the young coconut and vanilla flavors from the wood to blend perfectly into the caramel laden malt body of the beer. DBA is one of the rare examples of a well-done, low-alcohol barrel aged beer.