The name Beasto Blanco suggests the sound of the band that it describes. The band features Alice Cooper monster bassist Chuck Garric as well as the Father of Shock Rock’s daughter, Calico Cooper on vocals. Beasto Blanco will be bringing their monster of rock to Schmidy’s Tavern on Thursday 3/26/15 with local heroes The Hellions providing support.

If you are unaware of Beast Blanco here’s Garric’s take, “Beasto Blanco is prime for entertainment. It’s what we do, high energy rock and roll with theatrics featuring Calico Cooper. We obviously know where she gets it from.”

Chris Latham, guitarist, is anticipating a rockin’ return visit to the desert. “We’re looking forward to it and are really excited to be playing in the US.  I am familiar with the Coachella Valley and the Coachella Festival. I’ve played out there with other bands and it was always been fun.”

Garric concurs, “We haven’t played over here yet. This is our first US tour. I do know the history of Coachella too and have also played in the valley with Alice Cooper numerous times.” Garric is also familiar with the locals, “I know the music fans in the valley. They love music and love entertainment and that’s what Beasto Blanco will give them. They can expect to have a good time!”

Completing the Beast Blanco line-up is Jan LeGrow on bass, Tim Husung on drums, Tiffany Low on synthesizer & of course, Cooper on vocals.

Describing the band to the lay person, Garric simplifies it. “We are a product of rock and roll.  We all have very similar influences. It’s not hard to hear who we were fans of when we were growing up ranging from Motorhead to White Zombie to Queens of the Stone Age.” Latham reiterates the sentiment as well as focusing on the concert experience. “Without putting a label on it, we write and record our music keeping our live show in mind.”

Garric has played bass with Alice Cooper for the last 13 years. He performs with Alice 6-7 months out of the year which leaves little space for respite. “I really don’t have a lot of downtime. When I am not touring with Alice, I am working on Beasto Blanco.”

The Beasto Blanco undertaking is a fire in the belly for Garric. “For the last few months we’ve been writing and recording so after the tour we will be recording the follow-up to our first album, Live Fast Die Loud.”

After listening to their debut album you can hear the Zombie-esque influence. Add the dual male and female vocals and what you get is a rich, full sound that expands the audience as well as drives home the favorable tempos of a live rock show. See them live fast and die loud at Schmidy’s Tavern Thursday 3/26/15. 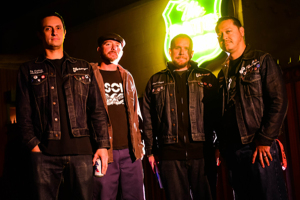 The following is a public service announcement provided by The Hellions themselves:

The Hellions are full of desert pride & continue to spread the rawk’n’roll gospel to those in need of salvation. The Hellions were initially possessed with the primal, bare-bones sound of hell raisin’ rockabilly. No other genre of music was as dirty, greasy, sweaty or evil. As they toured rigorously and performed countless live shows, a sleazy punk and rawk swagger infected the band and made them into what they are today; an excuse to shake your ass and drink some booze. So ladies and gentlemen, take cover for a high-volume, love-greased, sweat-inducing sonic neutron bomb that has been taking the Desert music scene by storm!

Lead guitarist of The Hellions, Jamie Hargate, provided an update on The Hellions. “This is our last show for a short while as we are planning to record a new record this spring and release in the Fall. This will be our 1st full-length release. All of our other releases have been EPs. We are currently talking with a few different studios and producers.”