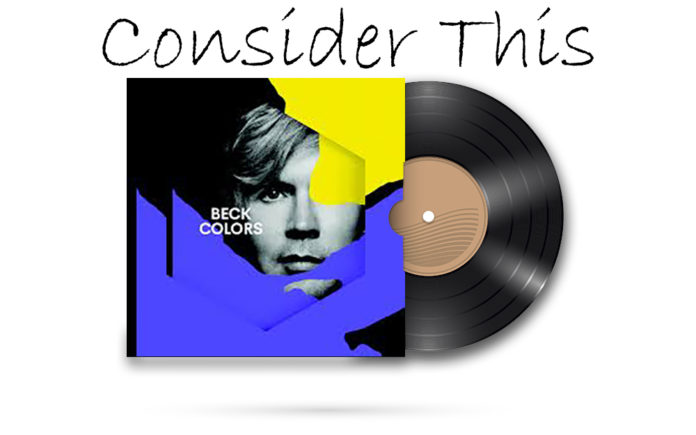 Well, you get the point, right? Sort of? That bit of doggerel comes from Beck on a song aptly entitled “Wow,” which can be found on his newest album, Colors.

It’s been nearly 25 years since Beck (ne’ Beck Hansen) burst on the scene in the Spring of 1993 with his first single, “Loser.” A smart-ass anthem that captured the attention of disaffected Gen-Xers, the melody was sluggish, but catchy, incorporating Bluesy slide guitar and loops. The lyrics split the difference between a Dylan-esque stream-of-conscious ramble and late ‘70s Hip-Hop touchstones like “Rapper’s Delight.” It almost had a novelty quality to it, but Beck was no one-hit wonder.

Beck was born in 1970, to a hyper-artistic family. His mother, Bibbe Hansen, had been a habitue of Andy Warhol’s Factory. Her father, Al Hansen, was a celebrated artist briefly affiliated with the Fluxus Movement. Beck’s dad, David Campbell, was a struggling musician/composer/arranger. (He went on to work on over 450 gold and platinum selling records, everything from Carole King’s Tapestry, to albums from Dolly Parton, Michael Jackson, Black Sabbath and Adele). His parents split up when Beck was 10 years old.

Although he grew up in a rough section of East Hollywood, Beck was influenced by Los Angeles’ eclectic music scene, soaking in everything from Latin sounds to nascent Hip-Hop and Punk bands like X. During his teen years he became infatuated with Delta Blues and fixated on progenitors like Leadbelly and Mississippi John Hurt. That in turn led to his discovery of Woody Guthrie and Blind Willie Johnson.

Feeling unsafe in school, Beck quit during Junior High. At this point he began playing guitar and would busk on city buses, performing a mix of Blues classics and his earliest compositions.

In 1989, he took the bus across the country to New York City. He immediately gravitated to the Lower East Side, inspired by the vibrant artistic community, which included Performance Art and Slam Poetry. He quickly fell in with like-minded musicians like Cindy Lee Berryhill and Roger Manning. But it was tough to sustain creativity and try and keep warm through the brutal New York weather. In early 1991, Beck returned to his hometown.

The quirky track began to gain traction on local radio stations. It debuted on KXLU, the tiny college station broadcasting from the Loyola-Marymount campus. Next, Chris Douridas played it on his KCRW show, “Morning Becomes Eclectic.” He invited Beck to play live on the show and he didn’t disappoint, performing “Loser” and “MTV Makes Me Want To Smoke Crack.” Soon KROQ, L.A.’s Modern Rock Behemoth, jumped on the bandwagon and added Beck to their influential playlist.

Suddenly his shows were jam-packed with record industry weasels itching to sign the next big thing. He ended up signing an extraordinary deal with Geffen that gave him the freedom to release one-off records through small indie labels Like Bong Load, Flipside and K Records.

His Geffen debut, Mellow Gold, was released in the Spring of 1994. A primitive mix of Folk, Hip-Hop and Punk, it steadily ascended the charts, peaking at #13. Immediately before and after that watershed effort, he took advantage of his unique contract, and released Stereopathetic Soulmanure through Flipside and One Foot In The Grave on K Records. Both albums burnished his indie cred.

Determined not to be seen as a “one-hit-wonder,” Beck returned to the studio with the Dust Brothers (the production team responsible for the Beastie Boys’ game changing effort, Paul’s Boutique.) Together, they created his 1996 album, Odelay. An irresistible aural collage, it remains au courant today, more than 20 years later. The record yielded three hit singles, “The Devil’s Haircut,” “Where It’s At” and “The New Pollution.”

Beck quickly earned a reputation as something of a musical shapeshifter. 1998’s Mutations was an adept mix of Folk and Tropicalia. He closed out the 20th century meticulously channeling Parliament, Funkadelic, Zapp & Roger and most especially Prince on his wickedly clever Midnite Vultures record.

Three years later he chronicled the heartbreak that followed the dissolution of his nine-year relationship with Leigh Limon on his eighth album, aptly entitled Sea Change. Calm and uncharacteristically quiescent, the songs managed to scrub away Beck’s hipster façade revealing unexpected gravitas.

In 2005, he bounced back, a husband, to actress Marissa Ribisi, and also a new father to son Cosimo, (their daughter Tuesday arrived in 2007). Beck reunited with the Dust Brothers and recorded Guero. Not only did the title reference the Spanish/Mexican nickname he received growing up in a largely Chicano neighborhood, the music harkened back to his roots, weaving an intricate tapestry of his L.A. influences. Debuting on the charts at #2, it is his best-selling album to date.

Less than a year later he was back with the stripped-down, yet fastidious The Information, and in 2008 he reappeared with Modern Guilt, an agile collaboration with Danger Mouse. For the next five years he stayed busy producing records for musicians as disparate as Charlotte Gainsbourg, Stephen Malkmus And The Jicks, Sonic Youth front-man, Thurston Moore and Honky Tonk traditionalist Dwight Yoakam.

He also found time to curate his Record Club Project, (challenging himself and a coterie of pals to recreate a classic album, be it from Yanni, INXS or the Velvet Underground, recording the whole thing in one day). Plus, he created Song Reader, a beautiful book that included 20 songs of sheet music and 100 pages of art. A series of Song Reader shows followed, featuring several superstar friends.

Beck returned in early 2014 with the gorgeous, mostly acoustic Morning Phase. Lush And bucolic, it hewed more closely to the Laurel Canyon sounds of Neil Young and Jackson Browne than the kaleidoscopic influences Of East Hollywood. Debuting at #3 on the Billboard charts, It received five Grammy nominations, winning three (Best Album, Best Rock Album and Best Engineered Album, Non-Classical), at the 57th Annual award show. His mini-sweep prompted a (faux) temper tantrum from Kanye West, whose attention-whore antics continue to overshadow his talent. (But that’s a whole other conversation).

Now Beck has returned with his 13th album, Colors, and true to form, it’s a stylistic 180 from “Morning Phase.” The title track blasts out of a speaker as if already in progress, Ping-ponging between speakers, the song quickly gains traction settling into a four-on-the-floor disco groove. It’s sleek synthesized pop that feels surprisingly cold and bloodless.

That’s how most of this record plays out. More of a genre exercise than a passion project. Take the aforementioned “Wow,” it opens with a combo slide whistle/pan flute wheeze that segues into thumpy bass lines and skittery synth drums. Although the action accelerates slowly, Beck’s flow is weirdly stunted and sepulchral. Lyrics like “standing on the lawn doing Jiu-jitsu, girl in a bikini with a Lamborghini Shih Tzu” aren’t fun non-sequiturs, they’re just lazy pseudo-rhymes. Actually, the whole song bares an uncomfortable resemblance to Fatboy Slim’s late ‘90s Modern Rock hit, “Rockafeller Skank.”

Then there’s the rubbery twitch of “I’m So Free.” Layers of synths, grungy guitars, descending piano notes and a vocal assist from Feist can’t camouflage the song’s innate dorkiness. Even as Beck chants “I’m so free,” it actually sounds like he’s saying “I’m so fake, I’m so fake now.”

Disco is alive and well on two songs, “Up All Night” and “Dreams.” The former is all over the map, shards of spacey guitar collide with a synth-clap rhythm, some cowbell and an oscillating string section. Apparently, he wants to stay up. Late, all night, in fact. With you. This song would perfectly punctuate an outre’ moment on a Bravo channel unscripted (but really scripted) reality program, like say, “Vanderpump Rules.” It feels that anonymous.

The latter begins promisingly with crunchy, metallic guitars, and phased vocals, but it quickly locks into a predictable shiny, happy backbeat. The song that seems to be channeling bands like MGMT, Foster The People and Broken Bells. This one feels like it would pair nicely with a “Below Deck” episode.

It’s not a complete shit show, “Seventh Heaven” blends twinkly keys, a pulsating beat, whiplash guitar and an infectious melody. There’s a pleasing elasticity and bounce to the arrangement that gives it a gossamer feel. Plus a hide n’ seek guitar solo that simply sparkles.

Scratchy guitar, pounding piano and a jaunty rhythm play out in ¾ time on “Dear Life,” echoing antecedents like the Beatles, Harry Nilsson and Beck’s (late) contemporary, Elliott Smith. Organ grinder guitar gives the song an extra kick. Spiky and tensile, “No Distraction” shares some musical DNA with the Fixx’s early ‘80s favorite “One Thing Leads To Another.”

Meanwhile, the hiccup-y falsetto Beck employs on “Square One” recalls Michael Jackson in his prime. Lyrics like “I’ve been watching the wheels turning but I’m learning to enjoy the ride on the road to nowhere” seem to draft off John Lennon and the Talking Heads. Yet the melody and instrumentation have that Yacht Rock-y sheen of ‘70s stalwarts like Pablo Cruise, ( but in a good way).

The record closes with the slightly more reflective “Fix Me.” Icy piano notes wash over a chunky backbeat and tinkling glockenspiel fills. It’s a simple declaration of love and it goes a long way toward compensating for the mishegoss that precedes it.

Beck has stated the primary influences for this record were Michael Jackson and “Pet Sounds” era Beach Boys. Co-produced with Greg Kurstin, the pair plays nearly all the instruments themselves on “Colors.” Apparently, they have been tinkering with these songs since 2013. It was actually sequenced and ready to be released last year, but Beck deemed it too whimsical (or something), for such a divisive, hyper-political climate.

2017 finds the country even more divided. On the surface, Colors is fun, infectious and dance-y, but dig a little deeper, and there’s no there there. At one point Beck notes “when you lower your expectations and you’ve run out of patience…you’ll be fine if you try to keep your eyes on the consolation prize.” Good advice for anyone hoping to love this record.