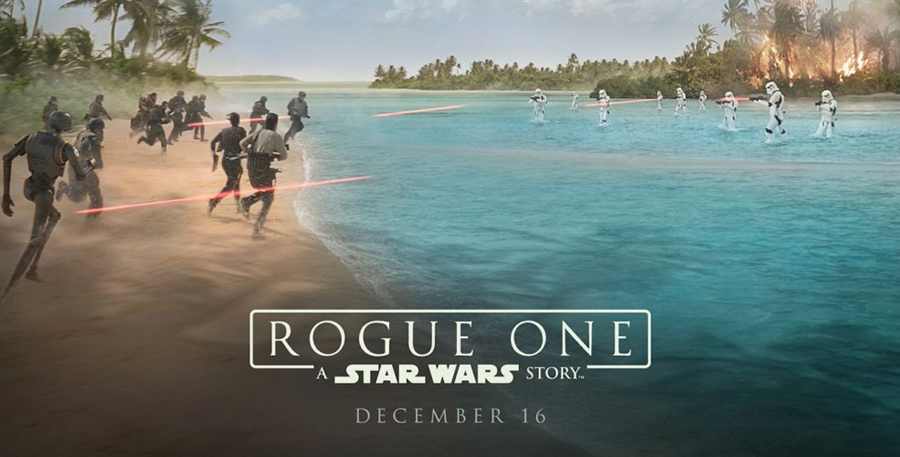 Clearly, the “Star Wars” legacy has permeated global pop culture and the saturation point appears to still be far, far away.  George Lucas has given birth to what is almost a religion and the “Force” remains a potent element in the latest iteration of the off-world cinematic saga.  Already in its earliest days of release, the till is on the way to registering more than $300 million with much more guaranteed to come.  Today, Disney’s landmark deal to purchase the rights from Lucas for a whopping $ billion seems like a steal.

The latest entry is not really a continuation of the main Star Wars epic but is instead a side story set in the same universe.  If one were to position this sub-story chronologically in the “SW” meta-verse it appears to unfold about three decades (that’s earth time) before the events of “A New Hope (or episode IV).  But there’s no narrative crawl that opens this chapter or side story.  Also, John Williams’ familiar score is only referenced – and nicely so — by composer Michael Giacchino.  But fear not, luckily for us, director Gareth Edwards (“Godzilla”) is a fan boy of the source material and his tight, action-filled direction is thrilling.  The story focuses on the Rebel Alliances attempts to steal the plans for the Death Star.  To add to the problems at hand, the Rebel Alliance is fragmented and disorganized.  The evil Galactic Empire is alive and growing. 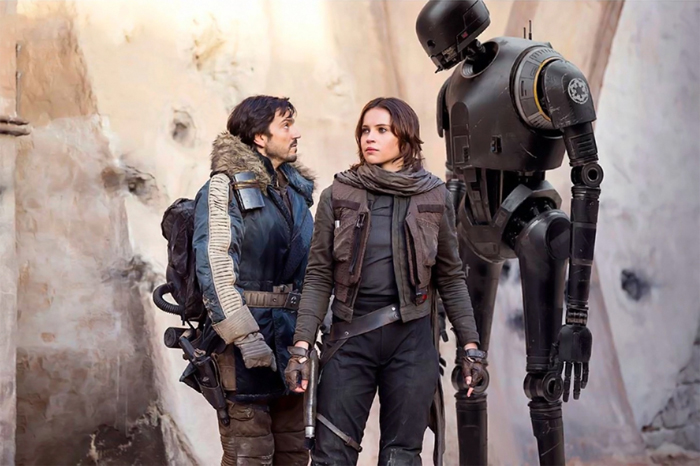 This standalone episode (I use that word loosely) works no matter how familiar you are, or not, with the entire saga or the numerous published side stories and animated films.  Sometimes grim but always exciting, the action is big and satisfying and I had no issues with embracing the new faces.  The casting here is superb but you aren’t required or asked to forget the memories of Princess Leia, Luke Skywalker and Han Solo.  Rather than detail a bunch of info that would require a batch of spoiler warnings, just be assured that this terrific film is immensely satisfying for die-hard fans.  I can say this because I am one.  Trust me and see this fast-paced film for an exhilarating ride that delivers everything you expect and most desire from another visit to this neck of the SW cosmos.

By all means, don’t miss this fabulous visual spectacle! Years ago, the level of effects and visualizations Rogue One has was impossible. To see Ralph McQuarrie’s marvelous concept art in full-blown effect was a great treat indeed. 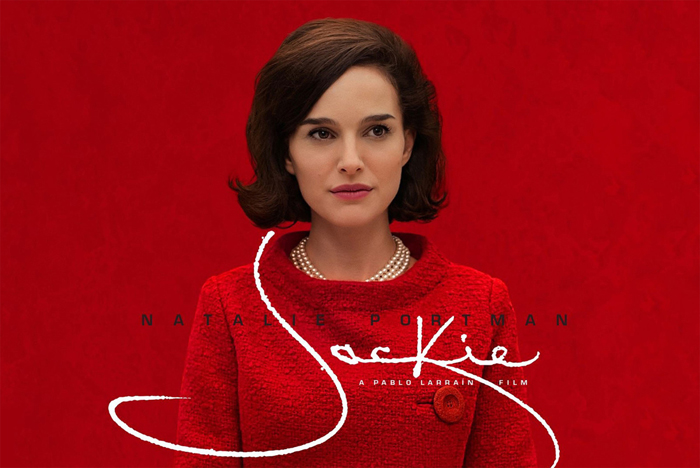 For everyone of a certain age, the killing of JFK marks a vivid emotional point on a personal calendar.

For Jackie Kennedy that day marked a moment of huge opportunity and she took it upon herself to define and make indelible the legacy of her slain husband.  This powerful and emotionally redolent take on that horrific day centers on how Mrs. Kennedy mourns in public and private while navigating the logistics of the stare funeral and it’s aftermath.  She alone intentionally named and solidified the notion that “Camelot” (JFK’s favorite musical) would remain in part of the long-lasting legacy of her husband’s presidency.

Natalie Portman is astonishing as Jackie.  Certainly she will be nominated for a Best Actress award.  She has mastered Mrs. Kennedy’s private and public voice and bears enough of a resemblance to carry this fine film that is structured around an unnamed journalist’s (William Manchester?) interview and conversation with her.  I was jolted by the shocking moment of the actual assassination — I didn’t expect to be riding in the limo with the President when his head explodes and Jackie tries to retrieve fragments of his brain and hold his head together when he slumps onto her lap.  But without that scene, the movie would fail.  It’s as much a horror story as it is a love story.

The production values are superb, mixing new and what appears to be elements of vintage footage in a near seamless blend of memorable moments.  John Hurt is wonderful as a visiting priest who shares some spiritual wisdom with a grieving, bewildered Jackie.  He says: “There comes a time in a man’s search for meaning, when one realizes – there is no meaning.  When you come to that horrible, unavoidable realization – you accept it.  Or you kill yourself.  Or you simply stop searching.  Every night when I climb into bed, turn off the lights, and stare into the dark, I wonder… is this all there is?”

The priest says, “Every soul on this planet does.”

The original screenplay by Noah Oppenheim is poetic and powerful.  Director Pablo Larrain captures the time and the meaning of those raw days with a grace that does justice to our sad memories.  Jackie Kennedy’s majesty and grace infuse every frame of this historic event that still reverberates in our hearts.  Don’t miss this intimate drama about the last days of Camelot.   Highest recommendation. 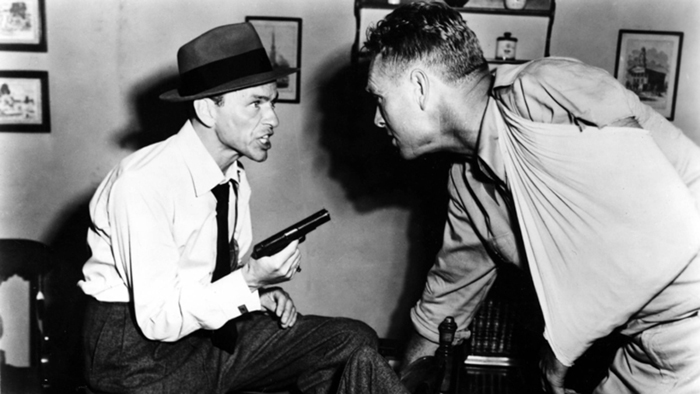 “Jackie” is proof that JFK’s death still resonates with us and our collective culture and consciousness.  Other films reflect that day and event. “The Manchurian Candidate” has been made at least twice, the original in 1962 with Frank Sinatra. He also stars in the notorious “Suddenly” about another presidential assassination attempt.  It’s been alleged (by Kitty Kelly in her controversial “Sinatra” bio) that Lee Harvey Oswald watched this film a few days before JFK was shot.

This cold-blooded thriller from director Lewis Allen (“The Uninvited”) feels as savage as it did decades ago when the New York Times called Sinatra’s performance a “melodramatic tour de force.”

The Film Detective’s newly restored (from original 35mm elements) transfer looks as sharp as when it came out of the lab. I was gripped by this very satisfying 76-minute suspense thriller. The strange, almost prophetic parallels with the death of President Kennedy will be forever embedded in this little gem of a film.  To say nothing of Sinatra’s alleged gangster connections at the same time of his actual Kennedy association. (Did Old Blue Eyes really pimp MM to JFK?).  The Film Detective/Allied Vaughn.  Blu-ray.