Are you tired, rundown, listless? Do you poop out at parties? Are you unpopular? If you’re looking for a little musical Vitametavegamin, the answer to all your problems is in this little record, Are You Real, from Los Angeles power trio, Beware Of Darkness.

The band has been together about six years. Lead vocalist/guitarist/sonic architect Kyle Nicolaides grew up in the sleepy coastal town of Santa Barbara. Musical inspiration struck before puberty and he made his bones in short-lived combos like the Rockabyes, the Cosmic Revelators and the Martyrs.

Soon he was haunting open mic nights at hometown venues like Jensen’s Main Stage and Muddy Waters Café. Setting up his own home studio, he was a virtual one-man-band, playing all the instruments himself as he laid down tracks.  A brief pursuit of higher education led Nicolaides to USC.  But his musical ambitions quickly eclipsed his college career. Things really began to fall into place when he was introduced to drummer Tony Cupito following a solo show.

Rather than jump headfirst into the hipster L.A. club scene, the three-piece spent a considerable amount of time honing their chops and crafting their sound. They quickly settled on the name Beware Of Darkness, and inked a deal with the indie label, Bright Antenna. After testing the waters with an EP entitled Howl, their first full-length, Orthodox dropped in the Spring of 2013.

A potent elixir that incorporated hints of Rock Opera, Prog, Glitter/Glam and Psychedelia, Orthodox was anything but. The cognoscenti immediately took notice and pretty soon the band was headlining club gigs as well as touring in support of legends like Smashing Pumpkins and up-and-comers Rival Sons. 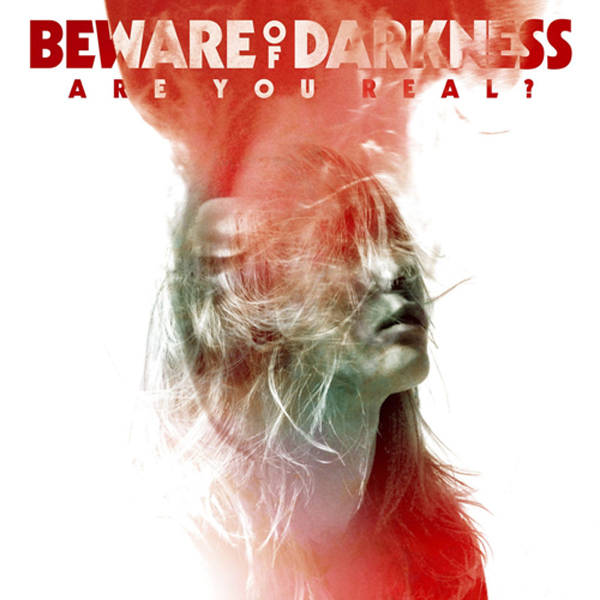 In an effort to placate their passionate fan base, the trio released a second EP, Sanctuary Season, in 2015.  But it only served as an aperitif, for the sumptuous 12 course feast that is their sophomore long-player, Are You Real?

The album opens with the raucous triple-play of “Muthafucka,’ “Blood, Sex, Violence & Murder” and “Dope.”  The first salvo, “Muthafucka,” careens out of speakers full-bore as Nicolaides declares “Motherfucker, I’m Back!” (No shit)!  Chunka-chunka power chords swirl around the hook-filled melody. Boomerang bass lines and a switchback rhythm split the difference between Industrial-Goth and Glitter/Glam.

Cyclonic riff-age collides with a hopscotch beat on “Blood…” Initially, Nicolaides plays the provocateur, announcing, “Blood, sex, violence and murder, murder/That’s my kind of shit, (pow, you’re dead).” But scratch beneath the surface, and the bravado gives way to real-life insecurities; “Take me back to when I was a kid, and everything I saw was as perfect as it was, unafraid of everything/Now I’m older, and now I’m colder, I’ve been beaten down one too many times by this world to know it’s easier to live in a shell.”

“Dope” is less dire. Driven by stompy syncopation, gritty guitar, wiry bass lines and layered vocals, it’s a salacious and slightly funky declaration of lust.  Blunt and brusque, the come-on is the antithesis of subtle; “Tell me if you’re down to ride, my appetite is running wild, come on make it fast/If I take you home tonight, the only thing that’s in my sight is how long will you last?”

Three songs here manage to add new texture and colors to Beware Of Darkness’ sonic palette. “Angel” simply pulsates, pivoting between whispery vocals and visceral instrumentation. Over sandblasted guitar and a punishing backbeat the lyrics flirt with theosis and the after-life. “I wish I was the Lord Almighty, control, control, control, control/I would know your future and every detail, and time and place and way you’d leave this world/You lived you cried, you fought you died, I spread my angel wings today.”

“Hieroglyphics” is positively sludgey. Down-tuned guitar, trampled-underfoot rhythms and roiling bass lines cocoon a howling cri de Coeur. The lyrics detail a cyber love-affair gone wrong. “Where the  files are stored she kept my heart, zipped in bits behind firewalls/But she hacked right  through and gave me a virus….in a digital world she broke my analog heart.”

Meanwhile, “Surrender” employs an anthemic melody accented by soaring, coruscated guitar and blistering bass fills as Cupito rides his hit-hat at a furious clip. At the height of the New Wave era this song could have sandwiched comfortably between A Flock Of Seagulls and U2 on a KROQ playlist.

The best tracks here are “Summer Daze,”  “Are You Real” and “Tell Me This Isn’t Fate.” On “Summer…” slingshot guitar riffs give way to staccato “we are Siamese if you please” figures. The leap-frog rhythm provides ballast to this infectious ode to sunny California, (“it’s much breezier here on the Left Coast”).

The title track is a jackbooted Minuet; anchored by thundering bass runs and a pummeling back-beat. Nicolaides’ vocals are manly and menacing on the verses as he doles out these withering bon mots; “The talk of the town is that you’re talentless and we all know it, I heard when you pray even God is like ‘Oh no, not you again’/How does it feel?  How does it feel? How does it feel? To be the bottom of the human race?”   Conversely, he also employs a feathery falsetto acting as a one-man Greek chorus.  His inventive guitar licks lattice over the melody. Rapid-fire arpeggios alternately sputter, spit and sparkle.

Finally “Tell Me…” shares some musical DNA with Billy Squier’s “The Stroke.”  From its whomping rhythm, and quiet-loud verse/chorus, it offers an irresistible Metallic Bubblegum crunch powered by whiplash riffs and Guitar Hero pyrotechnics.

The action slows only slightly on two tracks, the hypnotic “Sugar In The Raw” and the prickly “Beware.” The album closes with “Delirium.”

Uncharacteristically tentative, the instrumentation juxtaposes pinging space-age synths, warm keys, spectral guitar and a heartbreak beat. Stripping away his requisite sneer, Nicolaides is the sincere supplicant quietly pleading with someone to “please see through your delirium, wake up and see the monster you’ve become/Release, there’s nothing more that I can do, you’re killing yourself and all the ones that love you.” It’s a mournful end to a sanguine sophomore effort.

Mining the same musical territory as Arctic Monkeys, Raconteurs, Jane’s Addiction and Band Of Skulls, (sans the latter’s distaff energy), Are You Real is a potent antidote to the wintertime blues.