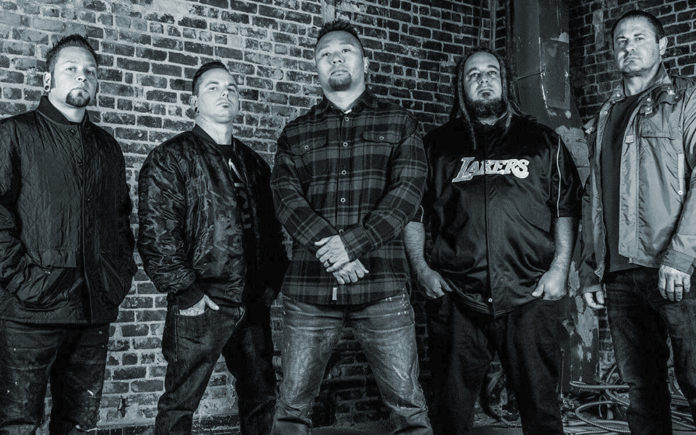 BI·AS, featuring pioneering original KORN drummer, David Silveria, will be performing at The Hood Bar & Pizza in Palm Desert, California on Saturday, June 8, 2019. Having released their first single earlier this year, Pity, along with the ‘B’ side, Change Your Mind, the songs have been received positively and foreshadow the sound to come from the Orange County quintet.

For their debut desert performance, they will be supported by Desert Metal natives Annabelle Asylum and Napalm Records artist Dropout Kings. The show is 21+ and there is a $5 entry fee.

BI·AS has in its ranks Rich Nguyen on vocals, Joe Taback on guitar, backing vocals, Mike Martin on guitar, Chris Dorame on bass and David Silveria on drums.

Coachella Valley Weekly spoke with the band during a break in rehearsal for an “unbiased” and candid interview.

On Their Status & Debut Album

“We’re feeling good. We’ve been really excited about this music with the new band and the new line-up. We’re excited to get out of the Orange County and Los Angeles area and debut what we do live in the desert. We’re going to try for a release this year as we go into pre-production, depending on how long pre-production takes, once that’s done we go into the studio and finish everything in September. It will be mixed and mastered in October and be ready for release no later than Q1 in 2020. We’re writing a lot. We’re trying to get 15-20 songs for our debut record. We work without Richard during the week writing and then we’ll send him the stuff and he’ll take it and rearrange it and send it back remotely. We just finished our twelfth song, so we need three more.”

On Melody and Metal

On the BI·AS Writing Style

“At first, we were leery about Richard cutting up the songs. We listened more and realized, ‘this guy knows what he’s doing’. There are no egos when we write music together. Whenever Richard takes it, changes or removes a part we are cool with it as long as the end result is a better song. We’re looking at the songs more and more as we write. It just kind of all clicks together and fits in with all the chemistry that we have with each other during the writing process. And when we write without Richard, we’ll do four of each passage expecting him to take it and chop it all up. We don’t’ take anything personal it’s just how we formulate songs. It’s just how it goes to make a song. The end result is a little bit better and we think it brought the core of the band together musically. We just had to wrap our brain around the music. Most of it is just feeling when we take it and have to relearn it in three days with different structures and changes. It brought us all together.”

On Comfort and Sound

“We’ve come to know each other on stage and what we know and do together. It’s just getting more comfortable. We’ve had four shows since January. We’ve worked on the back-end of things and the way we’ve run our sound. We’re all running with in-ear monitors now. It’s been going great. The show keeps getting more energetic and we get more comfortable as we go on.”

On Trusting Each Other

“It’s about strengthening the bond with all of us. We’ve played with a few different bands. It really gives us a sense of security with the bond that has occurred in such a short time. We’re pretty much all on the same page 95% of the time. If that one person says, ‘I’m not feeling this’, we go back and rework it and sometimes we get a better result and we all see that. Rehearsals are amazing and relaxing. We’re back in the studio today. We’re always pumping out a new track. Writing is going great.”

“The meaning that we wanted to portray was, whether you know it or not, everyone has their own biases. Everyone should be able to relate to each other and relate to the music because everyone should have their own thought behind it. It’s OK if you don’t like us. Take it for whatever it is. In the United States there are so many people drawing lines in the sand. No matter what your opinion is on whatever situation is involved, even all of us in this band have different opinions on what’s going on in the world and in the way we do things but at the end of the day, it doesn’t matter what our differences are or what our biases are, we can still get in this room and create some pretty cool fucking shit together. We think the world could take a little bit from that because it used to be that way. We think we’re losing that and some direction these days.”

“I don’t write anything that has anything to do with bias or politics. I just write whatever comes to me. Generally, what I write about are things that come into subconscious focus for me. Let’s say you’re looking to buy a car; you’re looking at a particular model and all of a sudden you see that car everywhere. It’s that type of stuff that comes into focus from the subconscious and I just go with it and I try to write my lyrics vague enough so that anyone can really relate or form their own opinion about it. I really write about specific instances that I view.”

On Pity, Change Your Mind & the Cynics

“We’ve received a great response to everything that we’ve put out. Pity is doing well on radio at the moment. People seem to like our ‘B’ side as well. Anyone that has come to see us live, that has never seen us before, have expressed that they like what we’re doing. We like what we’re doing. As far as the media and click-bait, you’re always going to get that. Any press is good press as far as we’re concerned. As long as we’re putting out something that we can stand behind that’s all that really matters. When we get on stage and fans are on the fence, we’re just gonna keep doing what we do.”

“Our song is playing on 93.7 KCLB by T.K. We’ll be on-the-air with him the Friday before the show. We’ve got a couple of new songs to debut at this show so we’re looking forward to that. We’re looking forward to seeing and meeting everyone at The Hood Bar & Pizza; pizza, drinks, music and a good time! We love our desert friend Ronnie King too! We’ve been flirting around with the idea of him coming up and playing with us on Saturday, so we’ll see how that goes.”