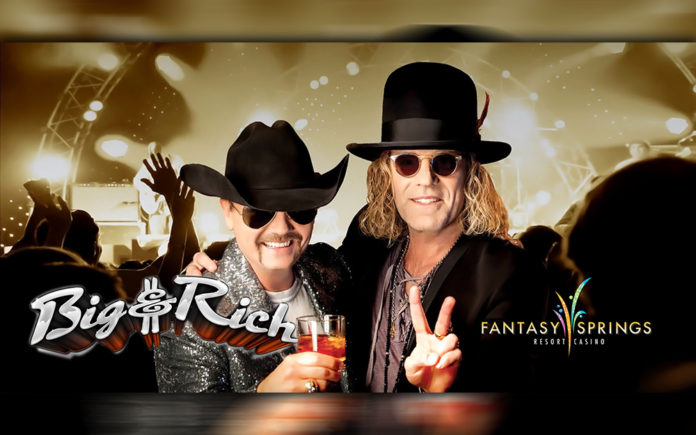 With a slew of Gold and Platinum records adorning their walls, multiple awards from every major awards show, including a Grammy on their shelves, the originators of “Save a Horse, Ride a Cowboy,” are coming to town and bringing the party with them. Poster kids for the adage, “Do what you love, and money will follow,” these swashbucklers of swank and all-American swagger, are bringing their Peace, Love and Happy Hour Tour to Fantasy Springs Resort Casino this Friday night, October 25. John Rich graciously gave an interview to CV Weekly cluing us in on what to expect.  If you are longing for a double shot of rocking Americana flavored inspiration, you will want to share this with your America-loving brothers and sisters, especially if they have served or are currently serving in our military.

Launching into the early morning interview with the kind of enthusiasm and confidence that stream from work ethic, hard earned achievement and passion for what he does, John Rich announced with genuine excitement, that Big & Rich are coming to our “si-tay.” (For those unfamiliar with this dynamic duo’s comprehensive contribution to country rock culture, “si-tay” is “city” in Big & Rich speak) “It’s going to be about as much fun as you can possibly have with DJ Sinister and Cowboy Troy getting the party started for us.”

In a more serious tone, he went on to share what Big & Rich have been doing for the last 1000 concerts without fail and will do again at the Fantasy Springs Special Events Center. “When we ask our veterans and active duty to identify themselves at our shows, there are always hundreds of hands that go up. So, every show, we bring active duty military and veterans on stage; we announce their name, where they serve, when they served, their rank and branch. Then we hand them the microphone and let them say what they want to say.  After that, we sit them down at the Big & Rich Redneck Riviera Whiskey Heroes Bar that’s located center stage, and we do a toast to them followed by our song, ‘The 8th of November,’ a song that was written about a Vietnam veteran.  We follow all that up with, ‘God Bless America.’  It has been quite a momentous thing to see how the crowd responds with love for our Vets.”

The Redneck Riviera Whiskey featured at the onstage bar is one John Rich himself recently developed. “I’ve always been a Crown Royal guy.  It’s even written into one of our biggest songs, ‘Save a Horse, Ride a Cowboy’: I buy the bar a double round of crown, and everybody’s getting down…’ It’s pretty much been our go-to cocktail when we choose to have one. It’s a Canadian blended whiskey.  A few years ago, I began to wonder if there was an American blended whiskey. I went out to a few big stores and asked them to show me one, and no one had anything, which was pretty astounding to me.  I thought to myself, ‘I’m going to have to get with a master distiller and see if we can’t come up with a brand-new blend that would be America’s answer to Crown Royal, maybe even smoother and 100% American made.’ It took me about a year to get the whiskey totally dialed in to where it was the smoothest whiskey I’d ever had.  My final taste tester, however, was my almost 88-year-old grandmother, Granny Rich. Granny Rich has been sipping whiskey since World War II, still runs her own business by herself. She is totally independent. She is the very essence of the ideal, ‘Work hard, play hard,’ which is what it says on the front of the bottle. When she told me, ‘Tell America, it’s Granny Rich approved’ in 2008, we began distribution.  We’re now in 48 states. The bottle glass and even the cork, are all American made. 10% of our profits support the families of veterans through the Folds of Honor organization (foldsofhonor.org) who put kids who have lost their parents in combat through college.  Redneck Riviera Whiskey sales have funded 60 college grants so far.”

John Rich will be holding a bottle signing the day of the concert, Friday, Oct 25 from 3:30-5 pm at Bev Mo in La Quinta.  He promises to sign every bottle and shake every hand.

Music and whiskey forums may not be the only place you can find Big & Rich. There are hints of a possible collaboration with artist, actor, producer, Mark Wahlberg.  “There’s nothing concrete yet, but we have been working with Mark and it’s been pretty cool.”  When asked if Wahlberg is as cool as he seems, he responded, “He is cooler than he seems, which is a great thing to realize. Mark is a humble guy, very focused, works extremely hard, takes care of his family, is a patriot, and loves our veterans and active duty. He’s my kind of guy.”

It would have been irresponsible of me not to ask for some notes for our readers with their hearts set on a career in songwriting.  He responded graciously and honestly.  “I’ve written many more hit songs for other people than I’ve sung myself. If you really want to be a professional songwriter, and you’re living in a town other than Nashville, you need to move here or at least visit on a semi-regular basis. You need to know what you’re up against.  There are a lot of people who, in their town, are the best. But if you want to compete with the best of the best, you need to understand how high the bar is.  I tell people this often, and very few follow my advice.  The songwriter scene is extremely competitive in Nashville.  They estimate that over 100,000 songs a week are written in Nashville.  There are fewer than 50 slots for number one songs in a year. People who have been doing the job for decades here are serious thinkers and doers. For every hit song they write, they have at least 150 that nobody has ever heard. Understanding the level you need to write at is number one. Once you figure that out, you’ve got to get in front of people, performing them as well as getting in rooms with other writers, preferably who are better than you are. That’s what I did as a wet-behind-the-ears kid in Lonestar.” (Rich’s first band) Note: Rich still remembers his first co-write meeting with Don Cook when he was 18 years old. He came prepared with 15 choruses in hand. It was key to his development as an artist in the industry.

Rich’s last words of advice were for those attending the show.  “Take your vitamins and drink plenty of water.  It’s going to be high energy show, and you’re going to need it.”