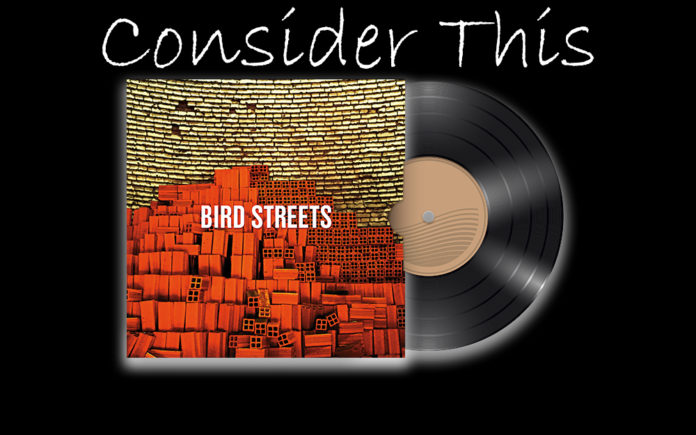 John Brodeur has been kicking around the music business for several years now, but the New York-based singer-songwriter may have hit pay dirt in his current project, Bird Streets. Los Angeles denizens know that the Bird Streets is an exclusive neighborhood between the hills of Beverly and Hollywood, (George Harrison famously memorialized a street with his song, “Blue Jay Way”). But in this case, it’s an inspired collaboration between John and musician/producer Jason Faulkner.

John is a tried and true New Yorker, born in Saratoga Springs, he grew up in the small town of Glenville. As a kid, he spent a lot of time indoors, battling a serious illness. It was during that period he “befriended” his parents’ record collection. He formed lasting relationships with the Fab Four, Crosby, Stills, Nash and occasionally Young, plus a surfeit of ‘70s stalwarts like Bread, Chicago, Jim Croce, Seals & Crofts and Led Zeppelin.  All of these record-pals sparked an early fascination with music and musicians, and John knew early on that he would make music his career.

When he was old enough to buy his own albums, his tastes were wildly eclectic. Blondie and the Xanadu soundtrack were quickly supplanted by Duran Duran, Def Leppard’s Hysteria, Elvis Costello and the cleverly eccentric Pop of They Might Be Giants. At the same time, The Beastie Boys kinda blew his mind. Not long after, records from The Black Crowes and Jellyfish seemed to synthesize the best musical impulses of the “Me Decade,” and inspired John to jam along. Then, just as he was turning 16, Nirvana released Nevermind.

That record supplied the impetus to form his first band, Norman, in the mid-90s. A Grunge trio, the three-piece managed to filter a plethora of unlikely influences into the loud-quiet-loud paradigm. They achieved a modicum of success, garnering a healthy local following, but pretty soon John moved on, fronting a couple more bands before going solo at the turn of the 21st Century.

Relocating to Albany, he released his solo debut, Tiger Pop in 2000. Aside from a stint in the band The Suggestions, (which resulted in an EP entitled Mix Tape), he pursued a solo path. Following a move to Brooklyn, Get Through arrived in 2009. Little Hopes was released in 2013. Each album received rave reviews, as well as favorable comparisons to like-minded artists such as Todd Rundgren, Robyn Hitchcock, Beck and Elliott Smith. Along the way John and Jason Falkner sort of became Pen-pals through social media, finally meeting in person in 2010.

Jason has been a working musician for over 30 years, originally making his bones in the final incarnation of Paisley progenitors The Three O’Clock. After their demise he founded Jellyfish with Roger Joseph Manning, Jr. A couple years later he formed The Greys with multi-talented musician/producer Jon Brion and they made one album before parting ways. Since then, he has quietly nurtured a solo career, releasing four albums between 1996 and 2009. In between, he has collaborated with everyone from Air, Beck, Alain Johannes, Susanna Hoffs, Jeff Lynne, Aimee Mann and Paul McCartney. Most recently he played bass in Noel Gallagher’s High-Flying Birds.

John and Jason first collaborated about four years ago. Their chemistry was instant and relaxed. Hoping for something of an aesthetic jump-start, John suggested they create some music together. Juggling schedules, they began recording in 2014. Bouncing between NYC and L.A. chipped away at the native New Yorker’s built-in antipathy for the Golden State. Pretty soon he began to grudgingly appreciate its smoggy sprawl. The name Bird Streets sprang up as an homage to the coveted ‘hood,’ as well his twentysomething years in Albany. Now, after writing, recording and fine-tuning, the eponymous debut is finally here.

Opening with jittery bass lines that throb like a caffeinated heartbeat, “Carry Me” is a perfect intro to Bird Streets’ smorgasbord of sounds. John’s laconic vocals line up with tilt-a-whirl guitar, lush keys a handclap beat and sweet-sour harmonies. All he wants is a little peace of mind; “Here’s what I’m trying find neither quicksand nor hardline, between a manic and quiet mind, there’s happiness I’m sure.” A spiraling guitar solo underscores the existential angst, then just as quickly, the whole song stops on a dime.

Sunshiny melodies and ornate instrumentation nearly camouflage the sharp criticisms on “Direction” and “Betting On The Sun.” “Direction” is anchored by tensile power chords and a punchy back-beat. The scene is set with just a few well-turned phrases; “Three in the afternoon on a Monday, you’re in the bathroom with a friend and everyone else can hear you/You fix yourself up and make your way back to the table, everyone shuts up and pretends nothing happened.” The narrator clearly resents being yoked to an addictive personality and his frustration is palpable. Guitar solos unspool with sitar-riffic charm, but the situation remains unresolved.

With “Betting…,” sugary acoustic riffs collide with chiming electric fills over a hiccup-y beat and layered falsetto vocals. Here John signals feelings of betrayal in the opening couplet; “I remember when we were tighter than Steely Dan, now the fix is in and you’re breaking up with your friends.” As the relationship takes a nose dive, the luminous melody becomes even more buoyant, echoing the effortless effervescence of AM ‘70s radio. Shang-a-lang guitars cushion the blow of this withering bon mot; “It’s a very fine line between living and just getting by, and you’re so comfortable being miserable to even try.”

The album’s centerpiece comes midway through with “Stop To Breathe.” Brittle guitar notes foreshadow the bitterness to come as lyrics detail a “break-up to make up” scenario that would make the Stylistics proud. Chunky guitar chords are tethered to a whiplash beat, as John addresses a toxic ex; “Seven months before I heard a thing, then I see the ring I gave you in a Third Street pawn shop window/Later on that year you strike again, standing at my front door, asking for some t-shirt you think I borrowed.” Sinewy guitars stack on the break, strengthening his resolve on the final verse; “Drop your weapons and retreat, Carrie, I’m not the enemy, and you’re a question mark, when an answer’s what I need, so we’ll leave it incomplete.”

The album’s best tracks unfurl in succession. Vitriol and sarcasm are the weapons of choice on “Thanks For Calling.” Opening with menacing bass lines, John’s winsome vocals trace the chorus, adding ringing, Beatlesque guitar and plangent keys around a snap-back beat. Acerbic lyrics address a duplicitous girlfriend who feels compelled to detail her every assignation. The listener drops in, mid-conversation; “So you’re kind of a thing now? Thanks for calling, I would have been better off never knowing, but you had to tell me everything.” The perfect popcraft partnership of melody and instrumentation nearly takes the sting out of this acrid tale of cuckoldry.

“Same Dream” is tour-de-force. Crackling guitar match up with a whip-crack rhythm, wiry bass lines and percolating keys. As the velocity revs, guitars accelerate, doubling down on the urgency of these stream-of-conscious lyrics; “Woke up high under a black morning sky, a nightmare come to life gets under your skin and leaves you paralyzed as you go inside your mind.” The acrobatic guitar solo shapeshifts from angular New Wave to epic ‘70s guitar hero pyrotechnics, leaving the listener spent and breathless.

Meanwhile, if the Raspberries, Steely Dan and Roxy Music ever thought to collaborate, it might sound something like “Heal.” Beatific harmonies, rippling piano notes and acoustic guitar kick off the song, giving way to a mid-tempo beat. The lyrics concede that, indeed, love is the drug, but we all still require a little emotional rescue; “I came to you looking for relief, hollow-eyed and shaking like a leaf, you were safe and warm, that’s why I stayed, praying that the rush would never fade,” but he ends up “anesthetized and hypnotized.” The grandiloquent piano on the break envelopes leap-frogging electric guitar, ratcheting up the tension before sweet relief is achieved with this big Pharma-tinged revelation; “Sugar-coat it if you will, but you’re no cure, you’re just another pill.”

The action slows on a couple of tracks. The shimmery “Spaceship” starts off Folky as plucked acoustic runs accompany plaintive vocals. Pretty quickly, splayed electric guitar, descending piano keys and a stuttery kick-drum add ballast. Desolate lyrics paint a vivid self-portrait of dashed expectations; “I was a party, waiting on guests, every night was Friday, inside my head.”

Initially, “Pretty Bones” is stripped-down, acoustic strumming so close you hear nylon strings brushing the frets. The vocals pivot from confessional and intime to dour and druggy as ooky keys, cascading piano and a thumpy beat accentuate the lonesome desperation. The lyrics take a cynical sideswipe at Tinseltown; “Hollywood’s a graveyard, all the stories have been told, but you’re sifting through the remains, looking for some pretty bones/The skeletons are laughing, they know something you don’t.”

The record doesn’t really wind down, instead, the final tracks close burst of energy on “Bullets” and “Until The Crown.” The former starts slowly with funereal keys and confessional vocals that recall Big Star, circa “Third/Sister Lovers.” Rather quickly, visceral guitar, brushed percussion and a tick-tock beat wrap around this romantic rapprochement. This song would perfectly score a moment of romantic epiphany in one of those sensitive coming-of-age John Hughes teen comedies from the ‘80s. The chorus strikes just the right balance between inertia and ambition; “We could just let it go and hope it goes away, sleep it off together and waste another day, go through the motions until emotion feels passe’/Keep firing shots until the bullets ricochet.”

The latter explodes with a burst a Punk-tastic energy, from the opening drum salvo to the hard charging guitar attack. Slightly cryptic lyrics could be describing symptoms of drug addiction or the euphoria of new love; “It isn’t working, the fever’s spiking, the ends are fraying and the days are frightening.” But by the chorus there’s a shot at redemption; “Trying to shine but fading quick, trying to feel less catholic, trying to be more of a human being, find the ends and not the in-between/Look through a cloudy pane of glass, at a possibility you think you never had, once again you’re fading to black.”

John and Jason pretty much played every instrument themselves, but they had some help on a couple of tracks from Craig Greenberg on piano, Chris Kelly on bass, guitarist Scott Litman, and drummer Scott Tofte. Backing vocals were provided by Maesa Pullman, Miranda Lee Richards and Michelle Vidal. Luther Russell (a sui generis singer-songwriter in his own right), added guitar and vocals to “Spaceship.”

Not since Matthew Sweet’s epochal Girlfriend album has an established artist redefined his sound in such an innovative and organic fashion. With their musical symbiosis on full display Jason has found a way to harness John’s diffuse genius, adding a bit of spit and polish, without sacrificing any of his grit, wit and honesty. Bird Streets offers an explosion of aural colors. Mad Hatter melodies and arrangements send the listener down a rabbit hole of delights. It’s definitely one of the best albums of 2018.