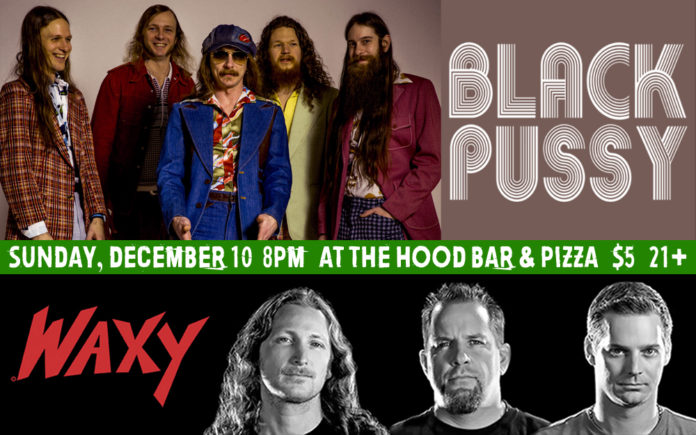 Black Pussy may sound familiar to you even if you haven’t heard their music. That name has caused quite the uproar, even causing cancellations across the globe. In this victim society, it is easy to be offended. Black Pussy is not named to offend people, but it has taken on that stigma. Dustin from Black Pussy hopes you can get past that, and give the band a listen. That band is a killer throw-back to 70s rock ’n roll, and they’ll prove it to you.

Waxy is a local band fronted by Robert Owen. They’ve been around for many years, and are about to release their second album. They’ve been a staple in the desert scene and can be seen playing all sorts of wonderful shows including the Autism Benefit. They’ve been a bit slow lately in order to focus on recording and promoting the new album, but will be playing a lot more in the months to come.

The show has been dubbed “School Night Rock.” It’s a play on “School House Rock,” and is named so due to the Sunday night booking. Dustin from Black Pussy and Robert Owen from Waxy discussed the amazing show and other topics with us. Tickets are $5 at the door. Get a solid nap and come join us for some adulting on this school night.

Coachella Valley Weekly: Who were your influences growing up?

Dustin Hill: “Everyone. I was born in the 70s. Cat Stevens to Kiss. I was born in Texas, so I’d go to Willie Nelson’s house for shows. My mom was a hippie, and I got to hear a lot of different things. My mother and all her boyfriends and husbands influenced me. Flock Of Seagulls, Queen, everything. Underground things like Syd Barret and Hawkwind. Everything from Beach Boys to the 80s. In high school I was a metalhead. In high school I got really into songwriters again. I found grunge a little late and fell in love all over again. I liked weird 90s bands like Hum. My weird thing I’m obsessing on now is The Bee Gees. I’m in a rabbit hole of soul and disco and I love it. Abba, Tramps, Stevie Wonder, all kinds of shit. Every time I go to Bee Gees, especially the album everyone hates, Saturday Night Fever, I fall in love. It’s a perfect album.”

CVW: How did the band form?

Dustin: “The band formed out of an idea. I was in a 14 year musical relationship with a guy. Our relationship ended at the highest level. Like a divorce. We had a house together! It was the first time I quit music. I felt performing was impossible because you have to deal with other humans. I was idealistic and wanted to be in a band and felt that was impossible. A band was brothers and sisters. You’re a family and you do everything together. I hit rock bottom. I was ready to start a new life. I had an acoustic and got suckered into playing with these dudes, but told them I’d only do this if we played how I wanted to play and use this name. It took like 4 years and was born from the ashes. I didn’t want people to be able to google it. I wanted it to grow organically like in the 70s. That was the whole idea. The 70s were a good time. We’ve changed a little, but the current band has been together 5 years and are my family. It was born from darkness. “

CVW: Have you gotten used to dealing with the backlash your name has caused?

Dustin: “Oh definitely. At first it was very scary. I didn’t understand it. I think we’re 3 years into it, and I’m very comfortable with it. I have a great understanding about it. It’s trendy to be a victim right now. I think our younger generation doesn’t buy into that. It’ll go away. I feel like, ‘sorry, nobody controls words and art.’ Art is fair game. People make The Human Centipede! You can make crazy horror movies, blackspoitation moves, etc. It’s art. Anything goes. I won’t bow to it. Nobody controls rock ’n roll. Terrorizer Magazine got afraid of the backlash and pulled the article. They put on Top 10 Satanic bands but are afraid of Black Pussy. What The Fuck? It’s easier to give in than stand up for yourself.” 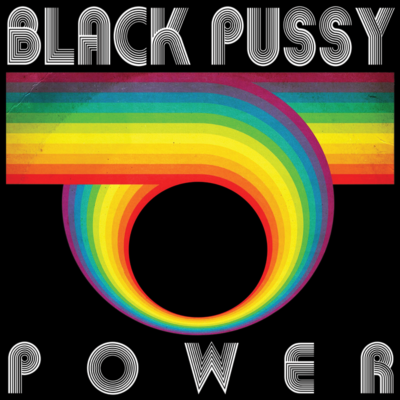 CVW: What prompted the move from Portland to Arizona?

Dustin: “Oh shit. You’re the first person asking this. In a nutshell, I moved to the Northwest because it was very liberal, but very balanced. The Northwest offered that. I think it’s now been infected with an extremist left regime. It’s militant. Tucson is what Portland was years ago. Plus, the winters aren’t as cold, so we can tour the winters. Wait…. IT WAS A MISTAKE TO MOVE HERE. I don’t want anybody to move here. It’s the greatest place ever.”

CVW: What’s taking so long with the new Waxy record?

Robert Owen: “It’s just been on the shelf. I think a lot of it in my mind feels like it’s the last record we’ll be able to afford for a while since I don’t have the studio any more. Maybe it’s fear of not giving a good impression, but no real good reason. I got myself into a bit of debt and got myself out. I like seeing money in my bank account. It takes money to release an album. Really, the last few months, it’s been about the artwork. I’ve been dealing with a few artists and I’m trying to find a good first impression. It’s been done, but it’ll be packaged and ready to go in the first part of the year. It’s coming up quick.”

CVW: You mentioned you don’t have your studio anymore. Any plans of getting it going again?

Robert: “I’ll say this… not having a space to get creative has made a big piece of myself disappear. All of that is in 4 storage lockers. It’s hard to believe it’s been a full year already. There are always plans in my mind to do it. You don’t make money owning a studio, but you do get to do rad projects. I’m trying to buy a house with a barn or something so I can get it going again. I’ve also become a partner in local label, Ruined Vibes. They’re doing great things with not only our scene, but bigger bands too. It’ll be nice to have a one stop shop to record and put out a physical release.”

CVW: Any plans on touring this new album?

Robert: “We definitely want to have more than one album release party. There’s talk of Bigfoot Lodge in Atwater Village in L.A. and some other places. I’d love to tour more thoroughly. I’m myself when I’m on the road. There’s been mention of Australia again. Hopefully it can come to fruition. Also, Cobraside has always been supportive, so hopefully they can help a bit. We really need to raise our profile back up again. With the current lineup, every show is a treat. Jeff (Bowman) and Damian (Lautiero) are amazing musicians. I hope we can bring that magic on the road. Jeff joined to tour Europe with us and stayed in the band even though that tour fell through. Damian is a lifelong friend. This record has taken almost 2 years. We’ve done cool stuff like Canadian Music Week in Toronto. That was fun, but there hasn’t been a ton going on. We hope to change that with the release of the new album.”

CVW: Beyond Waxy, do you have a creative outlet for things that don’t fit under the Waxy moniker?

Robert: “Unfortunately, right now, no. I have a major love affair with playing bass. I’m dying to be in a group as a bass player. I have a lot of friends I jam with, but nothing has happened yet regrettably.”

CVW: How did the Black Pussy show happen?

Robert: “Well, I first met Black Pussy through Brandon Henderson who used to book shows at The Hood. He’s a good friend and awesome musician. They became friends of his. He called me and said, ‘come down to The Hood. This drummer is playing the biggest kick drum I’ve ever seen.’ Everyone who knows me, knows I have a hard on for big drums. I became friends with them right away. We’ve played some shows with them before. Dustin called me and told me they had an opening and wanted me to hook up a show, so I said sure. It was great for us because we’re playing Cobraside the day before.”