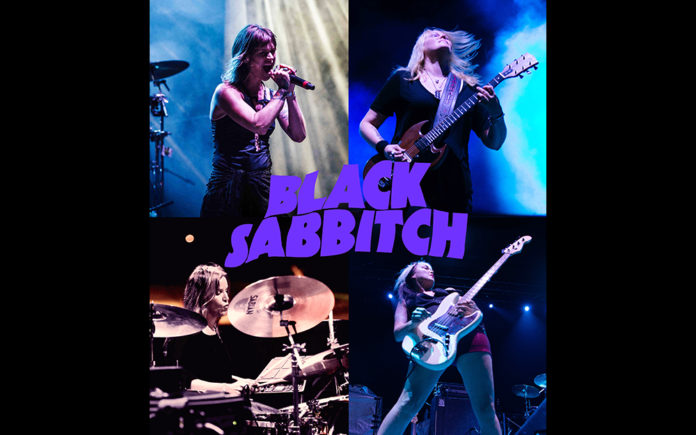 Since 2011, BLACK SABBITCH have been selling out shows and slaying even the most scrutinizing of BLACK SABBATH believers, gaining a faithful fan base and the respect of critics and professional musicians alike.

In 2015 they were hand-picked by Sharon and Ozzy Osbourne to open the inaugural OZZFIESTA and in 2018, the band was chosen by Dave Grohl to play Cal Jam 2018 with FOO FIGHTERS and IGGY POP, after which the FOO shared photos of the band saying, “We were spellbound!”

It’s this possession that BLACK SABBITCH has over its audiences that makes their live performances so unique. When they take the stage they melt faces and drop jaws as they nail every note written by the founding fathers of Metal while adding their own mind trip that intensifies the music even further.

BLACK SABBITCH includes Angie Scarpa on drums, Melanie Makaiwi on bass, Emily Burton on guitar and Alice Austin on vocals. They will be taking the stage at The Hood Bar & Pizza on Friday, November 1, 2019, for an exclusive Coachella Valley visit. Providing support for the evening are Coachella Valley Music Award winners for ‘Best Youth Band’ PESCATERRITORY and APHRODISIAC JACKET, the Desert Music Tribute to THE CULT. Doors open at 8 p.m. and the entry fee is $8. This show is 21+.

Coachella Valley Weekly interviewed Black Sabbitch drummer Scarpa as they completed yet another round of touring the Western United States.

CVW: The origins of Stoner Rock are unquestionably associated with Black Sabbath. What are your feelings about this area and that music?

Scarpa: “Well we definitely have a strong affinity for the Heavy Rock scene that came from that part of California. You can definitely draw a direct line to Sabbath.”

CVW: Black Sabbitch has toured across the country and has a significant history. What are some of your major accomplishments?

Scarpa: “Playing Cal Jam ‘18 last year was a pretty big highlight. Having OZZY ask us to open for him was also a big deal, as is knowing the original members of Sabbath all know about us and like what we are doing. When Home of Metal and artist Shepard Fairey did a Black Sabbath 50 year retrospective called NEVER SAY DIE!, they asked us to perform. Geezer Butler and Bill Ward were in the house so that was a bit of a mind-fuck LOL! Personally, having Bill talk to me about how I play drum parts that he wrote (and I frankly worship) would have made teenage me’s head explode.”

CVW: Your YouTube videos of stripped-down versions of Black Sabbath songs in artful settings are bad-ass! How did that idea come about?

Scarpa: “We started out doing little jam sessions in our touring RV just to pass the time on the road and we filmed a few and put them on our social pages. People always respond to the little personal things we do on our pages so we started to do more. Now, when we see something interesting out the window, we jump out and film a song in front. It’s led to all kinds of fun stuff like playing “Children of the Grave” in a New Orleans cemetery or “The Wizard” on top of a Stonehenge replica in Texas. One of my favorites is “Hole in the Sky” in a Louisiana rail yard. I’ve always loved trains and the nostalgic feeling you get when you see old train tracks out the window while on the road. When I saw that particular shot I just knew we had to do something there. It was sunset and just so perfect. We got halfway through when the cops showed up LOL. We finished the song and I sweet-talked our way out of there.”

CVW: Black Sabbath has such an extensive catalog of songs to choose from. What’s your song selection process like and how do you determine a song list for a particular show or venue?

Scarpa: “After seven years of doing this band, we’ve built up quite a catalogue. Our original edict was that we wouldn’t do anything unless it was the original four members, so that means nothing past Never Say Die. We started out with a list of songs we had to do, like “War Pigs,” “NIB,” “Sweet Leaf,” etc., and then we added things that we each really wanted to play, generally things that were out of the ordinary or that Sabbath never or rarely played, like “Sabbra Cadabra” or “Hole in the Sky.” Then we added things that people would shout out at shows, like “After Forever,” “The Wizard,” etc. That led to a pretty big list. We like to keep the audience and ourselves entertained so generally we make a different set list each night. We’ve also been known to change it on the fly or jam one song into the next the way Sabbath did in the early 70’s.”

CVW: How would you describe the unity and friendship within Black Sabbitch?

Scarpa: “We all get along really well and that chemistry really shows on stage. Melanie and I have been friends for 20 years and have been playing together in different bands for almost the entire time. That’s a pretty great thing for a rhythm section to be that close. Emily and I were in a band together years ago so we already had a bond when she came into Sabbitch and Alice is just an amazing source of light. Her energy has been a real godsend for the band. We all hang out quite a bit even when we are not on the road or playing music. These girls are some of my best friends and that makes playing together all the more joyous.”

CVW: What shows or venues do you have your sights on?

Scarpa: “This winter we will finally be doing an extended tour of the East Coast and Midwest and then in the spring we are heading to the UK for a few weeks. We are very much looking forward to that.”

CVW: What should people attending The Hood show on 11/1 expect from your performance?

Scarpa: “We’ve always strived to give as an authentic performance as possible. That means we play these songs with not only a sense of reverence for the material but also a sense of ownership. We don’t look at this as a covers gig or your typical ‘tribute’ situation. It’s always been more about the vibe of an early 70’s Sabbath concert, that indescribable meeting of Proto-Punk, Acid Rock, Swing Jazz and reckless abandon that only the original Sabbath line-up had.”
CVW: Having seen you perform before, Black Sabbitch is not a cover or tribute band, in my opinion. It is exactly as advertised, ‘The Female Black Sabbath’. What feelings occur when you’re performing?

Scarpa: “For me… pure joy and manic energy mixed with the feeling of dancing behind a drum set. Heavy, heavy swing.”

CVW: What’s it like when you hear someone has been attracted to you because you’re an all-female band or because of reasons other than Black Sabbath and turn them on to Black Sabbath?

Scarpa: “I love it. I am personally such a huge fan of the music that I love to get all geeked out with the fans after the show, talking about the emotion of it all or the elements that many people don’t dig deep enough to uncover.”

CVW: You’ve had several past members of Black Sabbitch. What are the best qualities of this line-up?

Scarpa: “This is the definite line-up. It’s honestly hard now to even remember a time when Emily and Alice were not up there with Mel and myself. We have such chemistry that we are almost communicating at an unconscious level. For me, as a drummer, that is key with this music. It allows us to take chances with the music and have the confidence that the other girls will be there to pick you up if you fall.”

CVW: I assume you all have backgrounds in original music. What other bands/projects are you involved with and would like to share with our readers?

Scarpa: “Yes, we all have our roots in original music projects, have made records and toured all over the world. None of us really had any notion to do anything resembling a tribute band until Black Sabbitch was born. Emily is a founding member of the long-running band Fireball Ministry who continue to make records and tour. Alice founded the Vermont-based band Zola Turn, who made many records before she went solo and began recording under her own name Alice Austin. Melanie founded the Los Angeles band Penny Dreadfuls as well as playing in My Ruin, Scarling and The Art of Safecracking, which is where we met and first started playing together.”

CVW: What do we need to know about Melanie Makaiwi, Emily Burton & Alice Austin that they wouldn’t necessarily share if asked? What would they say about you?

Scarpa: “I think all three of them would be too humble to tell you just what amazing musicians they all are and about me they’d probably say, ‘what?’, because I’ve deafened them all with my cymbals.”

CVW: If you were the only four people on Earth who could remember Black Sabbath’s music after waking up in an alternate timeline where they never existed, what would you do?

Scarpa: “I think we’d be doing exactly what we are doing now… bringing the gospel of Sabbath to the masses.”

CVW: Can we just agree that you return at least once a year to The Hood Bar & Pizza?