“Been sipping on memories, the come down from a manic heart/Situations got the best of me, so I’ll keep on strumming guitars.” That’s Bleached, channeling some heartbreak into the effervescent song “Chemical Air.”

The nucleus of Bleached is the Clavin sisters, Jennifer and Jessica. The girls grew up in the San Fernando Valley, idolizing Punk progenitors like the Ramones, the Misfits, the Germs and the Gun Club.

As teenagers they consistently made pilgrimages to The Smell.  The all-ages, alcohol-free performance space opened in downtown Los Angeles in the late ‘90s. In the tradition clubs like the Masque and Jabberjaw, the venue offered a safe haven for anyone who embraced the DIY Punk culture. Seeing groups like No Age, Lavender Diamond and Abe Vigoda inspired the sisters to form their own band.

Luckily, their parents, Linda and John, were completely supportive of the girls’ musical ambitions, supplying guitars and endless encouragement. When Jennifer was 19 and Jessica was  15 they formed Mika Miko with Jenna Thornhill, Kate Hall and Michelle Suarez.

Japanese for “storytelling,” Mika Miko immediately gained a reputation for their thrashy live performances. The five-piece were local sensations in L.A. before embarking on West Coast and then national tours. After releasing a series of 7” singles, they signed with venerable Seattle indie, Kill Rock Stars and their first long-player C.Y.S.L.A.B.F. in 2006.  Three years later, the band had run its course.

The sisters decided to spread their wings separately.  Jennifer moved to New York to study fashion and Jessica stayed in L.A.  playing with local favorites, Cold Shower. Still, the siblings continued to collaborate, albeit long distance, on song ideas. Once Jennifer returned home in 2011, they fully reinvented themselves as Bleached.

They released three EPs, each on a different indie label (Ooga Booga, Art Fag and Suicide Squeeze). They signed with the small, but influential label, Dead Oceans. Their debut, Ride Your Heart arrived in the Spring of 2013.

In a year where other female artists declared their independence on the tip of a foam finger and swung naked on a wrecking ball, (oh wait, that was the same person), Bleached was a breath of fresh air. A tart blend of Punk and Pop wrapped in Girl Group harmonies, it felt like the quintessential summer record. The album was greeted with critical hosannas and peaked at #18 on Billboard’s Top Heatseeker chart.

Constant touring and the temptations of city livin’ made it impossible for Jennifer and Jessica to focus on creating new songs for their next album. So they retreated to Joshua Tree, where the distractions decreased and cell reception is iffy at best. 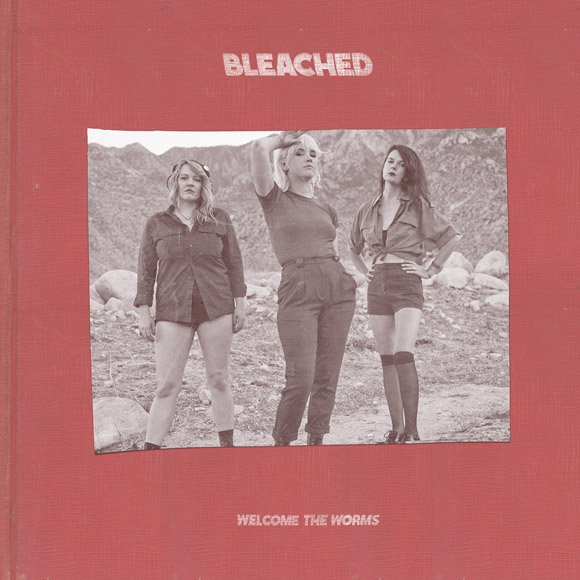 After they cobbled together about 30 songs, producers Carlos de la Garza and Joe Chiccarelli whittled them down to 10 tracks. The result is their sophomore effort, Welcome The Worms.

The opening track, “Keep On Keeping On,” comes blasting out of the speakers full-throttle. The tune is powered by shuddery guitars, rumbling bass and a pounding back-beat. Defiant lyrics speed-shift through the twisty turns of a new relationship, instructing a potential suitor “Like a good boy, don’t think about yesterday/Cuz’ I really want you today.”

Back in the early ‘80s, Hollywood made the movie “Valley Girl.” It was just supposed to be a quick teen exploitation flick; (Hollywood Punk Romeo meets ostensibly-superficial Val Girl Juliet). It drafted off the “Val-speak” that Moon Unit Zappa wickedly lampooned on her dad’s song of the same name. But the movie had so much heart, thanks to sharp direction from Martha Coolidge and soulful performances from Nicolas Cage, Deborah Forman, E.G. Daily and Cameron Dye, that it became a classic in the genre.

If the movie were ever to get re-made (actually, please don’t), Bleached could provide the soundtrack. Several songs here manage to juxtapose a tenacious, Punk-tastic grit with wistful introspective thoughts. The aforementioned “Chemical Air” wraps caustic instrumentation, boomerang bass lines, a rock-steady beat and soaring AOR guitar, around a tear-stained love letter to the City Of Angels. “Took a trip up Mullholland Drive to stare at the dirty letters in the sky/And I get this feeling I’m a girl with a dark side.”

“Sour Candy” opens with the ambient noise of a bong hit and an engine turning over. If the Beach Boys and the Runaways had a musical baby it might sound something like this. Wailing siren guitars crest over a handclap rhythm, stabby keys, and rich sororal harmonies. The ridiculously catchy melody belies lyrics that aim to escape reality. “Catch a ride with an unknown guy, smoking dabs and getting high/Cuz’ the past ain’t kind and the future scares me.”

The best tracks here tackle the intricacies of 21st century romance. “Wasted On You” weds a walloping back-beat, buzzing bass and guitars that alternately ring and squall with feedback. The pithy lyrics capture the shivery sensations of new love; “Maybe I should just call you up, cuz’ I have a little trouble saying what I want/Maybe I’m just trying too hard, oh what should I do, I can’t keep wasting my emotions on getting high off the drug I call you.”

“Trying To Lose Myself Again” explores the aftermath of a relationship gone wrong. Piloted by a jackhammer rhythm and keening, banshee guitars, any distraction will do. “I’ve been sleeping around this hungry town trying to find myself again/I’ve been fucking high every night, trying to lose myself again.

See-saw guitar riffs, bludgeoning bass and a stompy beat collide on “Wednesday Night Melody” The crunchy Cali-style harmonies acknowledge that music dulls emotional pain faster than any drug.  “Come on Boy, dry your eyes, it’s good to feel just a little alive/Drag a needle on the groove today and waste away.”

Other interesting songs include the crushed velvet groove of “I’m All Over The Place (Mystic Mama).” “Desolate Town” matches bone-crusher bass and fuzzy shards of guitar with the sisters’ insouciant harmonies, and bitter kiss-off lyrics.

Finally, “Sleepwalking” is a catalogue of cyclonic riff-age. thrumming bass fills and a triple-time tattoo add ballast. The melody, especially on the instrumental break, shares some musical DNA with the Romeo Void classic, “Out On My Own.”

The album closes with the crystalline denouement of “Hollywood, We Did It All Wrong.” Here the sisters wax nostalgic for their misspent youth. Sure, there were mistakes, (“looking back, I try not to laugh,”) but that’s all a part of growing up. Happily, all this weighty introspection is cloaked in a hook-filled melody. It’s a sun-kissed finish to a great record.

Although Bleached is very much a 21st century band, their music evokes distaff L.A. antecedents like Josie, Cotton, Bonnie Hayes & The Wild Combo, Fleetwood Mac and of course, the Go-Go’s. They manage the neat trick of seeming fresh and familiar at the same time.

Jennifer and Jessica were joined on this album by drummer Marc Jordan and bassist Micayla Grace who is now officially the third member of Bleached. Welcome The Worms successfully side-steps the dreaded “sophomore slump,” offering a richer, more nuanced portrait than their debut. This album is an instant classic.