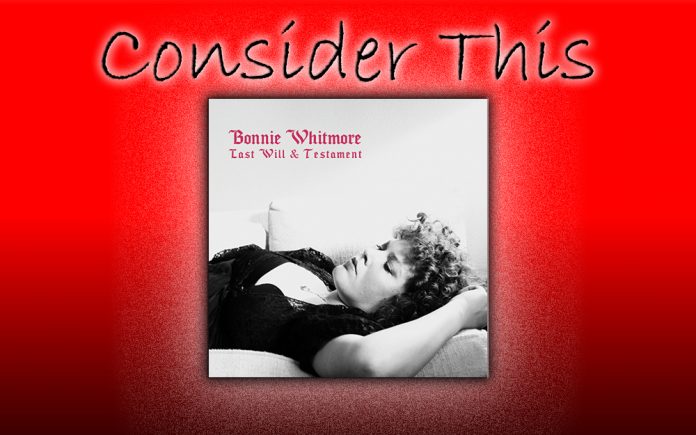 Bonnie Whitmore’s music tends to blur lines, and that’s a good thing.  The Denton, Texas native grew up in a musical family and she began making her own music as a toddler. She first picked up the fiddle, and “promptly put it down,” before settling on bass. By the time she was eight years old she’d s witched to guitar and then cello.

Pretty quickly, she, along with her older sister, Eleanor joined her parents in the family band, Daddy & The Divas. Her dad, Alex, was an experienced pilot and would fly the band to some of their gigs. Not only was her mom, Marti, a trained opera singer, but she also taught her daughters to be outspoken and unapologetic. She insisted they both have the courage of their convictions.

While she counts her parents as her primary musical influence, that list of inspirations grew longer and more eclectic as the years progressed, beginning with Bonnie Raitt and Tracy Chapman, to Phoebe Snow, Traveling Wilburys, Erykah Badu, Lisa Loeb, Centro-matic, Fiona Apple and Emitt Rhodes. By age 15, she officially began her solo career. At the outset, she earned her keep by playing bass or adding backing vocals for local Texas musicians.  At the dawn the 21st century, she moved to Austin, she relocated to Nashville for a few years, but returned to the Lone Star state and made Austin her home.

She first made a name for herself by singing back-up for heavy-hitters like Hayes Carll, Eliza Gilkyson, Jimmy Dale Gilmore and Butch Hancock. At age 21, she secured her first residence at Momo’s, pretty soon she relocated to the legendary Continental Club. Within a few years, she became James McMurtry’s go-to opener on tour.

Bonnie recorded her solo debut, Embers To Ashes in 2011, it garnered great reviews, and created significant buzz. Two years later she followed up with There I Go Again. Her third effort, Fuck With Sad Girls arrived in 2016 and caused quite a stir. Not that Bonnie ever courted controversy, but she’s never shied away from speaking her mind. Early on, she decided she was going to sing about the stuff she wanted to talk about. Now she has returned with Last Will And Testament, which is a sequel of sorts to Fuck…

The ambitious title track kicks the album into gear. If Tammy Wynette, the Shirelles and Vic Flick were ever asked to create a new James Bond Theme, it might sound a bit like this. Angelic harmonies are supplanted by static-y rhythm guitar, tensile bass, swoony strings, reverb-drenched electric guitar, anchored to a stompy beat. Cryptic lyrics touch on a local musician’s suicide; “So I’ll work on my reverie, the only one that hurts is me, and I don’t need to take your time/Cause it’s just one more off my list, and we can seal it with a kiss, and I’ll go back to writing my last will and testament.”

On three tracks, Bonnie wears her influences on on her sleeve. With “Right/Wrong,” co-written by Scott Davis, slip stitch guitars thread through a tapestry of knotty bass lines and slurred Hammond B3 notes, over a relax-fit cha-cha-cha rhythm. The melody shares some musical DNA with the Bee Gees “How Deep Is Your Love” and the guitar jingle-jangle echoes the Wilburys’ frisky “HandleMe With Care.” The lyrics ask the tough questions; “Where do you want to go? Surrounded by endless chatter, it’s hard to hate up close, and words can get lost in the face of what really matters,” Before concluding; “What’s the point of liberty, and the land of the free without you and me?” Propulsive horns drive the irresistible chorus and twinkly piano notes close out the song.

“Fine,” which was co-written by Jaimee Harris, could sandwich nicely between Tom Petty and Emmylou Harris. Hard-charging guitars, rumbling bass lines and a wash of Hammond B3 are tethered to a galloping gait. The lyrics chart the highs and lows of a combustible romance. She offers some false reassurance; “Are you okay honey, are you looking for the exit sign/Are you coming with me, know whatever you decide, I’ll be fine, I’ll be fine.” Sure, she says she’ll be fine, but what she means is she’s not fine, but she will be. The final chorus is pared down to just Bonnie and an acoustic guitar, and her heartbreak is palpable. But so is her resolve.

Meanwhile, she tackles “Flashes & Cables,” a signature song from her hometown heroes, Centro-Matic. While the original was equal parts sad-sack and shambolic, Bonnie’s arrangement slowly builds from torchy vocals and tender piano on the first verse, to stacked harmonies, shreddy guitars, vroomy keys, spidery bass and a rattle-trap beat. Although this song was written and recorded in the mid ‘90s, lyrics like “Nobody told us the bastards were here, all the rogues and the scoundrels are shedding their tears/No, nobody told us the cameras were here, all the flashes and cables, won’t someone please save us,” seem to mirror these fractious times.

For Bonnie, the political is personal and vice versa. There have been times in her career when she was urged to just shut up and sing, but that has been nearly impossible, since she was raised to speak her mind. That ethos is evident on two tracks, “None Of My Business” and “Time To Shoot.”

The former, co-written with Astrid Swan, is lush and languid. Bonnie wraps her sultry and soulful vocals around Beatlesque keys, gauzy strings, lonesome pedal steel, rippling bottleneck guitar and a tick-tock beat. The song was written in reaction to the 2015 terrorist attacks at the Bataclan club in Paris. That horrific event isn’t explicitly mentioned, but throughout the song, she searches for a solution to the unthinkable madness. The final verse feels like a start; “Instead of melody, let’s find the harmony, love forwardly, don’t let our fears defend us.”

The latter obliquely references the mass-shooting that occurred at the Pulse Nightclub in 2016. A 29-year-old security guard killed 49 people and wounded 53. Most of the patrons were Hispanic and LGBTQ. The song unfurls slowly, Bonnie’s vocals cresting over concentric keys, piquant guitars and a thumping beat. But the arrangement shapeshifts on the chorus, urgently building toward a crescendo, as strings sway, the beat slips into a martial cadence. She seems to be addressing the assailant when she notes “For the truth, for the war, to know what you’re fighting for/Cause it’s not about faith, if all you hold is to hate.”

The best tracks here spotlight Bonnie’s ability to straddle different musical genres. “Asked For It” is a spiky New Wave anthem that could have been written in 1982. Jagged guitar riffs ride roughshod over pounding piano, rubbery bass lines and a walloping backbeat. The lyrics drill down on a misogynistic rape culture still comfortable with blaming the victim. Here, she can barely keep her indignance in check as she spits out the facts; “There are few who try for retribution, statistics show it’s more like one of six (five)/Don’t worry, they probably knew them, cause after all, sex is sex.” The scorching guitar on the break underscores the rage and frustration.

While “Asked For It” is sharp and biting, “Love Worth Remembering” is a slow-cooked Soul jam. Barbed wire guitars connect with plush Hammond B3, tensile bass and a thwoking beat. Recalling the bucolic beauty of Gram Parsons’ “Hickory Wind,” the song feels like an instant classic. Bonnie invests her whole self as she pays homage to a newfound love that’s built to last; “Cause I make you laugh, and you make me sing, finally at last, I know what I’m doing/And I’ve got your back, don’t mention a thing, just glad we have a love worth remembering.”

Finally, “Imaginary” is a complete surprise, taking a few pages from the Tom Waits playbook. Springy toy piano is matched by off-kilter percussion, akimbo bass lines and coiled guitars. Bonnie’s vocals are spectral and mechanized until the full-throated chorus. Lyrics challenge us to persevere; “Sleep will come, as soon as our work, united we become equal as to everyone.”

The record closes with “George’s Lullaby.” Sleek and Supper Club smooth, the song is a sharp blend of Jazz and Country in ¾ time. Sparkly, Honky-Tonk piano is bookended by sultry strings, liquid guitars, authoritative upright bass and brushed percussion. There’s a catch in her voice as she offers a tender encomium to her late friend and mentor, bassist George Reiff. “They say that the hearing’s the last thing to go, so my friend, my heart heart-beats once more/Be with you forever, with me always, I’ll see you again, somewhere and some-when, I’ll see you again, someday.”

The album was recorded over a five-day period, a sixth day was factored in to add strings and horns. But everything was recorded live in the studio. Bonnie split production chores with Scott Davis, who played all manner of guitar and added vocals and horn arrangements.

Following a path paved by antecedents like Dusty Springfield and Linda Ronstadt, Bonnie’s music colors outside the lines and blurs perceptions. Clearly, she is courageous enough to follow her muse and speak her truth. As she announces in the song “Imaginary,” she seems unafraid to “hold out and be contrary.” Last Will & Testament feels like Bonnie Whitmore’s watershed moment. If you’re smart, you’ll soak it all in.