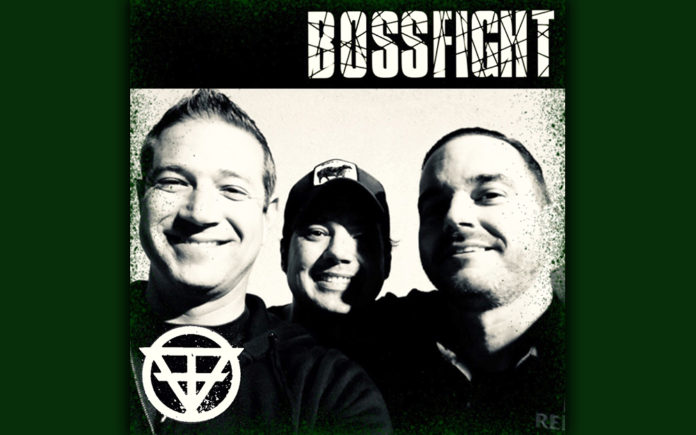 If you like metal, punk and everything in-between, you should get a hold of Gilly, Davey and Brian as soon as possible. BOSSFIGHT is a three-piece ‘reverse-crossover’ rock band based out of San Diego by way of Lake Arrowhead and Big Bear. On bass and vocals is Brian ‘Gilly’ Gilstrap, on guitars is Dave Settimi and on drums is newest member Brian Gaeta. Gilly described BOSSFIGHT as a “punk band with a metal edge”. Their sound can be described as both aggressive and melodic, combining sounds that have heavy rock overtones like Black Sabbath, Iron Maiden, and Van Halen with an aggressive punk rock foundation in the manner of Propaghandi, Bad Religion, and NOFX. On Friday, June 1st BOSSFIGHT will be performing with fellow ménage à trois bands THROW THE GOAT and SLEAZY CORTEZ at The Hood Bar & Pizza. There is NO COVER and the show begins at 9 p.m. Coachella Valley Weekly spoke with Gilly and Davey by phone as they aimlessly roamed the Punk Rock Bowling & Music Festival in Las Vegas. Suicidal Tendencies had just finished their set so the dudes were a bit fired up. 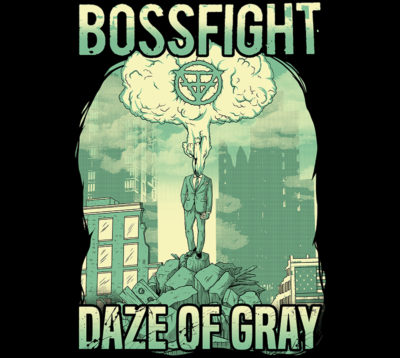 “Daze of Gray is 11 songs produced by Marcos Curiel, guitarist from P.O.D. Dave and I have been in bands together since junior high so it’s a lot of years of songwriting together putting our best stuff down and recording it the way it was supposed to be recorded. Ernie Longoria (Sprung Monkey) laid the drum tracks on the album. Ernie fucking ripped it and he brought us to a level we’d never thought we’d be at. The songs on the album are based on our life experiences and all of the lyrics were written by me and Dave.”

Gilly: “One of the first albums that I owned was Metallica’s Kill ‘Em All and early Megadeth. We also have roots in Iron Maiden. When Geraldo Rivera had his talk show about metal being satanic my mom took all my metal away so my only option was, ‘I’m into punk now’. I listened to the Sex Pistols and the Ramones. You can hear all of it from the metal to the punk influences in the music that we play. Being from the mountains is a different culture too. We grew up in the woods, drinking beers and using generators to play music.”

“We write some lyrics then we switch off and share lyrics and then we give ourselves 30 minutes to add to it or make it better. You want that off the top of your head ‘in the moment’ ideas. As soon as you start to try to dig and delve deeper you start to fuck with that inspiration so we keep them 30 minutes then we switch back so it’s a true collaboration. We’ve been writing music since we were 15 years old so the actual music part is really easy. I don’t write a song lyric complaining about my situation. We want to write a song so you could have a feeling and we can make it big enough where somebody can interpret those lyrics and get that same feeling that we’re trying to get out there.”

“I’m a video game geek. At the end of each level there’s a boss you have to beat. I’ve played virtually every video game console invented. Our Gen X is squeezed between two huge generations so we have our own experiences that are different than what the others felt.

Being in BOSSFIGHT is a true collaboration. I worked at Guitar Center for twenty years before they went private and Venture Capital came in and bought the company. I have songs about that. There’s lyrics related to Gilly’s situation with his divorce, our material is more mature than just about drinking beers and partying.

Stuff is starting to open up for us. We feel really blessed and fortunate. After grinding it out for four years it’s starting to coalesce.”

“I met Troy (Whitford) at A NAMM show party at the Doll Hut and they just shred. I thought, ‘we need to play with those guys’. THROW THE GOAT fucking rips! The Hood is the place to be. I saw Throw Rag there. We show up early and we stay late. This is our first time playing the desert. We have fans scattered all the way to Palm Desert. The Hood has always had great bands, especially during Coachella.”

Gilly: “I have worked for a major beer distributor for 20 years. Music is my escape from the daily grind. It heals my depression and solitude. If I can play music, I’m good. I’ve been playing with Dave for so long we know how to click.

Dave: I currently work for Paul Reed Smith Guitars. I’m their accessories product manager and. I spent many years helping to build a chain of 27 music stores to 250. In the end I left the company and had nothing to show for it. I asked myself, ‘Why didn’t I invest that in my passion and art?’ I’ll never do that again. You grow and you get better. We’ve been able to sit on some broad shoulders like Marcos and others in the industry. We are older. When you really try hard you’re gonna succeed no matter what. Those friends who look at it as a business and work hard are doing pretty well. We have to continue and put the work in and get some passive income. Those are dividends that pay you back.”

“We’re currently writing new music with Marcos Curiel and plan to record a whole album of material. The newer stuff we’re writing is where we’ve wanted to be for the last 20 years”

A MESSAGE FROM BOSSFIGHT

“Music is important. Whether schools fund it or it’s given away for free on the internet eventually they’ll figure it out and one day hopefully we’ll be stuck with doing this for a living. Whatever you’re dealing with in life or what you’ve been through, we’ve been there and we’ve done that so we can relate. We’re all in this together. We’re about raising the water level, not building a bigger boat. That’s how you build a music scene.”

Don’t miss this hat trick of a rock show as it starts promptly at 9 p.m. and is 21 and over.