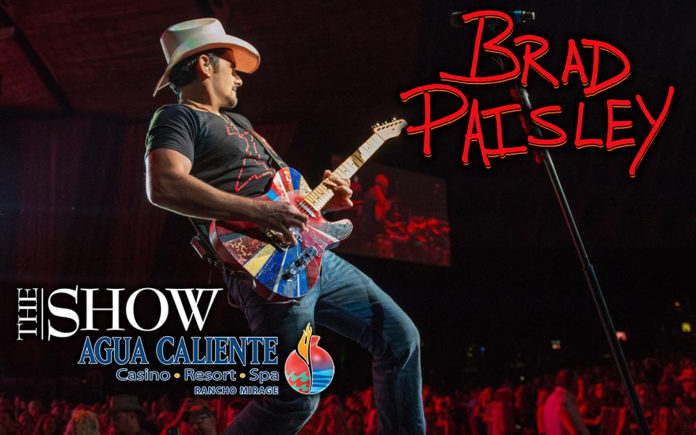 The Show at Agua Caliente Casino Resort Spa has announced a performance from country music superstar Brad Paisley on August 2 at 8pm.

The extraordinary design of The Show, now celebrating its tenth year, creates an intimate space for experiencing legendary performances, as all seats are within 125 feet from the stage. Tickets range in price from $160 to $200. Visit www.HotWaterCasino.com or call (800) 585-3737 for ticketing information starting Friday, April 7 at 8 a.m.

Brad Paisley is a critically acclaimed singer, songwriter, guitarist and entertainer whose talents have earned him numerous awards, including three GRAMMYs, two American Music Awards, 14 Academy of Country Music Awards, and 14 Country Music Association Awards (including Entertainer of the Year), among many others. He has been a proud member of the Grand Ole Opry since 2001. Paisley has written 21 of his 24 #1 hits. His 11th studio album, LOVE AND WAR, which was released April 21, 2017, was his 9th consecutive studio album to debut #1 on Billboard’s Top Country Albums chart. On April 28, 2017 LOVE AND WAR was released as country music’s first ever visual album for a limited time exclusively on Apple Music and now is available on VEVO.