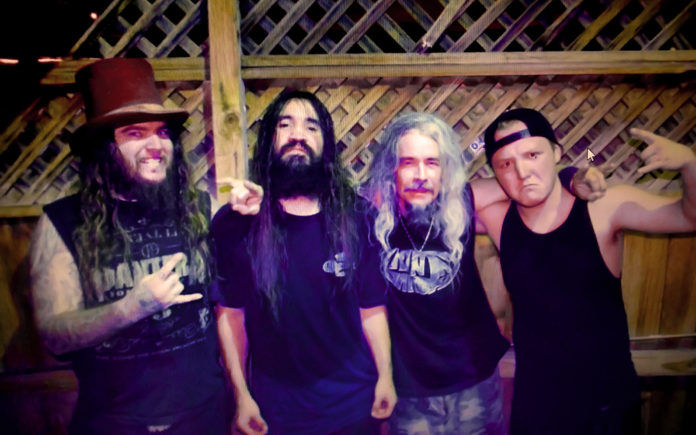 Multiverse is the 2017 release from Brain Vat, a battle-tested and well-established desert metal band who are primed to thrash live music venues once again. The album has a Pantera-feel with a Hatebreed-vibe and a heavy metal dose of doom you can groove to. Brain Vat is Brad “The Wizard” Garrow on guitar, David “The Legendary” Gonzales on bass, Sheridan Carnahan “The Wild Irishman” on vocals/lyrics and Anthony Matyja on drums. 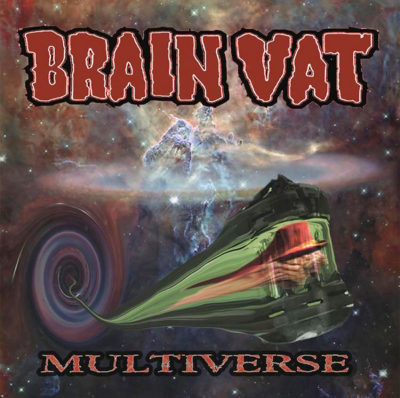 In listening to the album I’m reminded of the occasions I’ve seen them perform live. Their set is high energy and loud as fuck. Garrow’s inspired swagger on stage is contagious to any metal fan. His low-tuned guitars add a thicker and heavier sound than any other metal you have ever heard. After listening to his possessed work on this album I can’t wait for him to shred it live, he’s a compact beast of riffage. Conjointly, Carnahan comes into his own on this album. His signature ‘bowel growl’ is more pronounced and his vocals were laid down definitively. Gonzales’ bass work is note-perfect. He’s the first to minimize his worth but I can assure you that you will hear his bass lines in every song and with the addition of drummer Matyja, they form the nuts and bolts to which all the rest is positioned.

Recorded at Garrow’s Dead End Studios and clocking in at 30 minutes, these ten songs will grab you by the neck and pull you into the hardcore world of Brain Vat. You can find the album on iTunes, Spotify and other digital music outlets but you have to see them live. Below is a conversation between Coachella Valley Weekly and Carnahan.

CVW: Congratulations on MULTIVERSE. Tell us about the album.

Carnahan: “Brad and David wrote an insane amount of really killer riffs with lots of ideas and put them to use. We had Frankie Ramirez on drums to get this album started and then throughout the process ended up with Anthony Matyja, who killed it, to finish this record. Both are great drummers whom we love and respect. I, of course, conjured up plenty of great ideas from my portal, er I mean hat, to help orchestrate this album into the beast it was going to become. And speaking of beasts, that’s when our producer Angelo Miles Romo came in and grabbed it by the horns and whipped us into shape.”

CVW: What was the recording experience like for you?

Carnahan: “We never, for a second, accepted anything less than ‘BAD AS FUCK’ across the board. Every step became an obstacle and we overcame. We started a publishing company, MR.BIZZARDO MUSIC, LLC, and had awesome people like Mikey Doling (Snot, Soulfly, Invitro, Channel Zero) pop in with little studio secrets and a great ear. Brad, who spent an insurmountable amount of hours, and I fingered that mix to hell and back. When we were finally happy we sent it out to get a fantastic mastering done.”

CVW: What is the premise behind MULTIVERSE?

Carnahan: “The theme is all over the place. Each track is in a different universe hence the name, ‘MULTIVERSE’ and the artwork with the brain vat zooming through wormholes was developed by me and my brother Collin Finn. The back cover was created by Lesley Sierra and each square represents a song. It’s a cool journey though; the album being made as well as the ride it will take you on.” 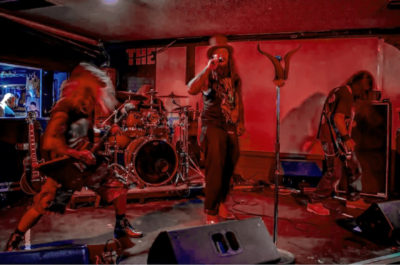 CVW: Brad is a phenomenal guitarist and an equally phenomenal producer. What was it like to have him in both roles?

Carnahan: “As far as Brad in the studio, I couldn’t imagine not having him there doing what he does. We all have such a rad energy and friendship; we just get together and are so excited to do some shit. It’s always a great time.”

CVW: What makes this album different from your prior work?

Carnahan: “The previous album was damn good. But we found ourselves on this one. This is the next level of Brain Vat, period! No, exclamation point!

Brain Vat is planning an album release party and will have CDs and new merchandise for sale soon! Stay connected with the band on social media and keep desert metal alive!”

Find MULTIVERSE on iTunes, Spotify, and all other digital music outlets.