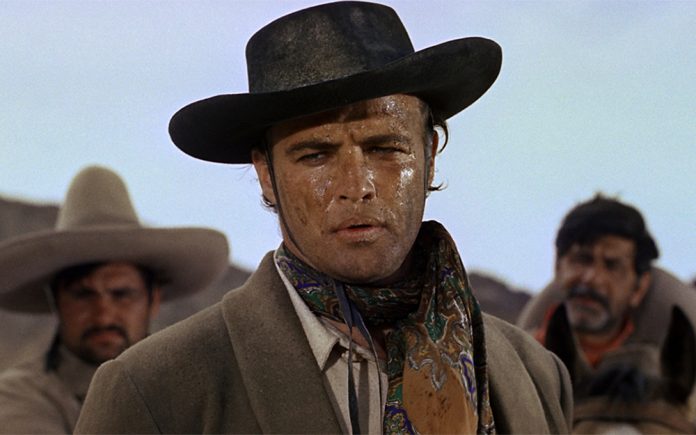 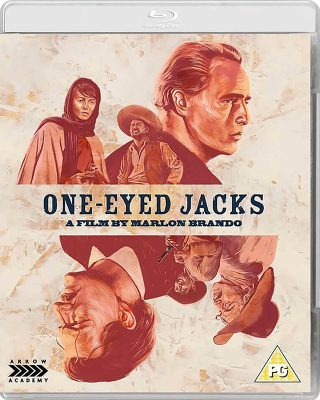 Much-lauded iconic actors who directed stand-alone masterpieces are few and far between.  The name Charles Laughton comes to mind for his unexpected and praised work on “THE NIGHT OF THE HUNTER” (1955).

What makes this beautifully crafted western unique is not only the painterly Technicolor wide-screen cinematography but also the mix of myth and naturalism in Brando’s Freudian suffused performance.  The project started with Brando’s  desire to create/produce a “lofty, socially conscious western on the treatment of native Americans.”  But the movie evolved in a different direction.

Adapted from Charles Neider’s novel The Authentic Death of Hendry Jones.  At one point Rod Serling, Sam Peckinpah and Louis L’Amour turned in screenplays.  Brando signed to star and Stanley Kubrick was briefly attached to direct but he didn’t like Packinpah’s so-called “perfect script” so he and Brando started fiddling with the screenplay Marlon retitled “The Crimson Field.”

The final script’s morphing plot begins with a bank heist in Mexico, during which outlaw Rio (Marlon Brando) and his partner, Dad Longworth (Karl Malden), make a run for it, but Dad has bigger plans beyond freedom. He betrays Rio and absconds with the loot, but Rio ends up in prison.

Years pass, Rio finally breaks free goes on a mission to enact his long-plotted revenge. After tracking Dad to California, Rio learns he’s become a sheriff — which is no deterrent — but after Rio falls for Dad’s stepdaughter, Louisa (Pina Pellicer), he has second thoughts.

The backstory has Rio riding with Longworth as a young orphan some believe was based on “Billy The Kid” — Longworth calls him “Kid.”  They rob a bank in Mexico.  Longworth betrays Rio, running off with the gold and leaving Rio to for the Federales.  Five years later, Rio escapes from jail and goes looking for revenge.  Longworth used the money to buy respectability, and is now sheriff in Monterey, California. 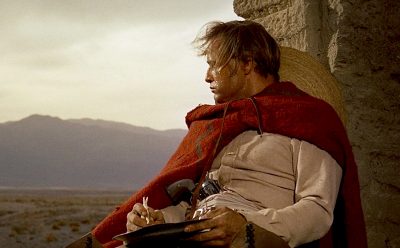 Three outlaws want to rob the bank there, but need someone to deal with Longworth, so they recruit Rio.

Rio goes ahead to Monterey to find Longworth.  When they meet, Rio acts like everything is fine and they just split up in Mexico.  Longworth is wary, but brings Rio to his house.  Longworth married a widow, and has a stepdaughter, Luisa.

Rio and Luisa fall in love.  Rio tells Luisa the truth about Longworth’s betrayal, and his desire to kill Longworth.  Luisa is willing to go off with Rio, but not if he kills her stepfather.

Rio quits the gang, and the others go to rob the bank without him.  At the bank, one robber is killed, one escapes with the gold, but they kill a girl.  Longworth decides to pin it on Rio, so he can hang Rio and keep his past life hidden.  An unsuspecting Rio is arrested and thrown in jail.  He is told he will get a nice trial and be hanged the next day.

Luisa helps Rio escape from jail.  Rio hopes to avoid a confrontation, but Longworth goes after him.  Rio fakes being shot, dropping to the ground.  When Longworth comes to look at the body, Rio shoots and kills him.  Rio promises Luisa he will come for her, but he rides rides off.

According to many sources, this was not Brando’s original ending.  Brando filmed a scene where Luisa is accidentally shot and killed by Longworth in the final shootout.  As is sometimes the case, the studio anted a happier ending and cut Brando’s proposed scene.

One-eyed jacks is a phrase most often used to describe cards that are being declared wild.  How it enhances the eaning of Brando’s movie is up to you.  I think it may have influenced and perhaps inspired the title for Packinpah’s “The Wild Bunch.”  Limited xtras include Brando’s audio of what he wanted to do a number of scenes.  His creative process and thoughts are fascinating. Criterion.  Blu-ray.

Drop me a line if you have questions or comments.  I like hearing from reades and fellow film buffs.  There are more movies than ever, both old and new, to enjoy in our ever-improving home theaters.