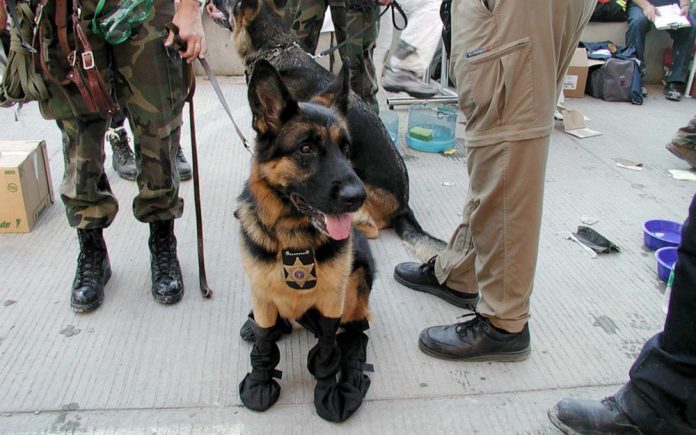 Amazing dogs comfort the sick, they are the eyes for the blind, and they comfort to the lonely.  They are trained to assist law enforcement and the military.  Their keen sense of smell enables them to detect certain cancers in humans with an incredible rate of accuracy.  Dogs are now trained to detect Covid at airports and in stadiums.

Dogs are heroic creatures who engage in searches to locate humans in distress. We recently passed the 20th anniversary of the worst attack on our nation that happed on September 11, 2001. Dogs were there in the aftermath of the fall of the twin towers in New York City.  About 350 canines relentlessly searched the rubble for months.  They often became depressed when their search yielded little result according to the veterinarians and Humane Society personnel who were on scene.

They suffered burns, cuts, and dehydration as they sorted through rubble of the World Trade Center for hours looking for survivors and human remains. One dog, Apollo, survived after being engulfed in flames. Another dog was saved after falling.

Keeping the dogs healthy enough to continue their dangerous work was a major challenge for veterinarians, many of whom voluntarily pulled themselves away from their practices.  Also caring for the dogs were members of the New York Police Department’s Emergency Services Unit, canine division; and volunteers and officials from the Suffolk County, New York, Society for the Prevention of Cruelty to Animals.

Supported by their caregivers, search and rescue dogs worked around-the-clock in 12 hours shifts. The dogs’ ability to detect even the most miniscule fragments of human DNA among the rubble allowed forensic investigators to identify many of the 2,977 people killed at the site.

In addition to caring for search dogs, veterinarians and volunteers also aided in rescuing pets left stranded in apartments all around ground zero after authorities locked the area down. They also provided first aid to human first responders caring for eyes encased in ash and providing pain medication.

Prior to 9/11, there were no official standards in place for dealing with animals at disaster scenes.  The canine rescue effort at ground zero helped set protocols for future disasters while working 24/7 for months at the site. 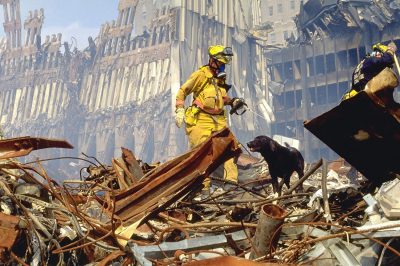 Roy Gross, Suffolk County SPCA Chief recalls, “Dehydration was the biggest issue we had.  These dogs had to be washed because obviously they were covered with contaminants.  They couldn’t smell anything because they were so covered.  Their eyes had to be irrigated with saline solution.  There was another dog that I remember.  And he was coming in toward the mobile hospital.  I can see the dog is collapsing.  And the handler gets the dog over for food, water, and whatever he needed.  Then the dog starts pulling his handler back to the pile like he knew he had a job to finish.”

Tragically there were few live human survivors for the dogs to rescue at ground zero, causing the animals to become depressed.  At times, their handlers would hide themselves under debris to give the dogs a sense of purpose to keep going.  One handler was approached by a woman who said, “I just want to thank you and your unit – your dogs found my son.”

Dogs and human rescuers fought against time in this overwhelming disaster.  Twenty years later there is still a grave need for national coordination which includes animal disaster response.  None of the 9/11 dogs perished at the scene, though all of them are now in heaven.  Now trained to detect Covid, dogs are still proving to be amazing heroes, saving lives while giving us hope.