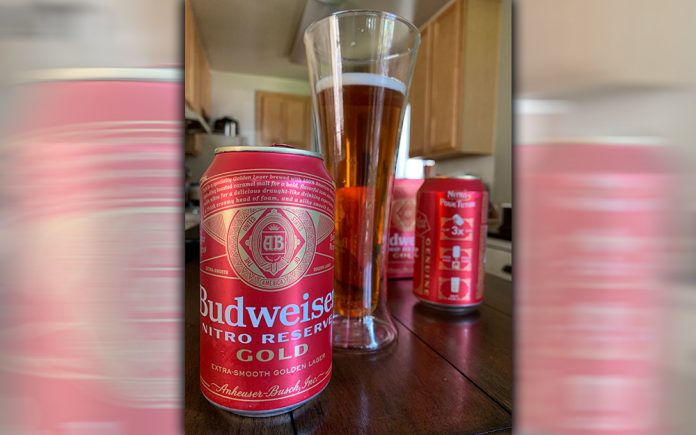 On March 3rd, 2020, I was hard at work at the Brewcaipa Brewing Company, brewing several specialty beers for both the upcoming Saint Patrick’s Day and brewery 3rd anniversary parties that were less than 2 weeks away. On my mind were the reports of a worldwide pandemic that recently made its way to the united states and was threatening to possibly close businesses if things went as feared. No part of me was paying attention to new beer releases, especially not new beers released by Anheuser-Busch, so you can forgive me for finding out only now that Budweiser released a nitrogen infused lager on that day (this review is coming a little 2000-late to the party, but I’ve spent the last 4 ½ months locked indoors and doing my best impression of Howard Hugh’s in his recluse years, so I’m not exactly up on current beer events). Ah, Budweiser and their portfolio of reserve lagers. This one in particular seems to have earned the ire of many beer fans, particularly for the way Nitro Reserve seems to be marketing itself like the public has never heard of the concept before.

Almost every small brewery serves a nitrogen infused product on tap, usually a stout or porter. The practice of infusing stouts with nitro goes back to the Ireland, the Guinness brewery, and a man named Michael Ash. For the twenty years that Guinness’s taproom had been in operation, they’d fill pints of beer using two different kegs, blending an over carbonated beer with a mildly carbonated beer to get a finished pour that had a nice head of foam and a soft, creamy mouthfeel. It purportedly took a minute to fill a pint glass (which probably seems an eternity when you have a crowd of thirsty, impatient beer drinkers yelling at you to hurry the fook up), and this whole convoluted system was used deep into the 1960’s by many European pubs looking for that certain texture to their beers. Not at Guinness though. Michael Ash solved that problem for them in 1959, when he employed the idea of infusing their beer with nitrogen instead of carbon dioxide. Nitrogen is a very inert gas, much less vigorous than carbon dioxide, dissipating quickly and leaving without the “bite” that carbon dioxide leaves. The image of nitrogen gas dissipating from a poured beer, cascading in a pint glass and going from foam to liquid, that image is married to the identity of Guinness stout, thanks to the innovations of Michael Ash.

So, it’s no small wonder that Budweiser Nitro Reserve, and the advertising for said product, bugs the shit out of more than a few beer lovers. 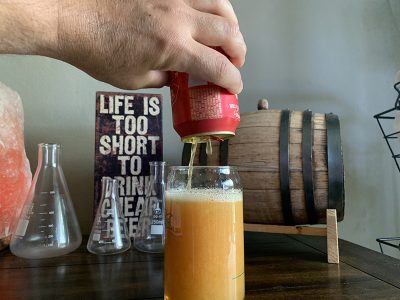 In the official press release for Budweiser Nitro Reserve, AB-InBev declares that “(This) specialty brew is breaking the rules of conventional beer and offering a premium drinking experience for beer lovers”. Paste Journalist Jim Vorel criticized Budweiser’s statement, saying “The company unsurprisingly ignores the many non-stout craft beers that have been served on nitrogen over the years”. Vorel also finds Budweiser’s use of the term “nitro” to be extra cringy, but I personally feel that since most casual and mainstream consumers will associate the word nitro with the texture of nitro cold brew coffee, it’s a term the company knows will relate to their consumer base. Vorel also has a point that independent craft brewers have been releasing golden stouts, cream ales, and various other styles of beer on nitrogen for quite some time now. Budweiser presumes that their consumers are unfamiliar with nitrogen gassed beer, and markets this product as such.

Budweiser’s latest release has a gimmick which may not excite the critics, but does the beer have what it takes to excite the consumer?

APPEARANCE: No two ways about it, when poured, the cascade effect of a nitrogen infused golden lager is impressive. Brilliant color and clarity, a dense, white head of foam maintains nicely, even leaving a ring of suds on the top of the pour as the drink is consumed. 5/5

NOSE: Grainy, cereal mash, reminding me of the packages of instant cream of wheat I’d have as a child. Lightly herbal and woody. Unimpressive. 2/5

TASTE: Burnt toast, burnt sugar. Behind that is bread dough and the same herbal, woody character that is in the nose. Lacking in complexity and depth but finishes clean even when warmed a little. Slight astringency. 2/5

OVERALL: Nitro Reserve ranks near the bottom of the reserve series that Budweiser has been offering over the past several years. Their Black Lager was surprisingly well executed, as was their amber lager, Freedom Reserve. Nitro Reserve had a burnt character and astringent note that persisted throughout the drink and took away from the overall enjoyment of the experience. This recipe lacked the depth of their Copper and Red reserve lagers, but wasn’t offensive. Drinkable, if underwhelming. 3.25/5