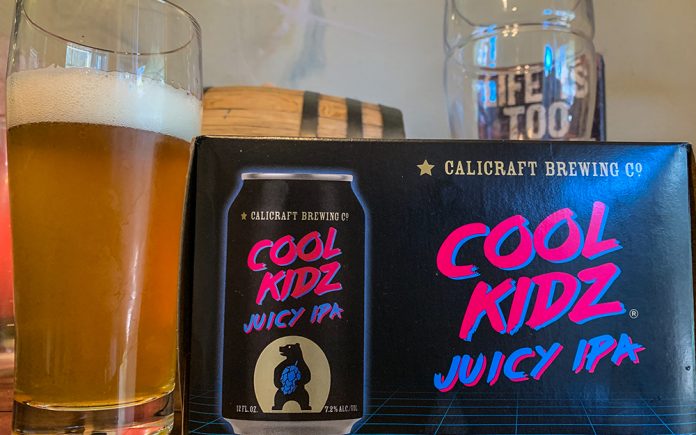 Ever since the IPA eclipsed the pale ale to become the standard bearer of the American craft beer movement, breweries have pushed boundaries, innovated techniques, created substyles, and forced bad ideas, all in the name of progress. Beginning life as a substantially strong and bitter pale ale, the style has spawned lasting trends (who knew the session IPA style would have this much longevity?) as well as fleeting fads (rest in peace, brut IPA, we hardly knew ye), and by 2020, the IPA has branched off into two distinct styles; hazy and clear. Beginning life as the NEIPA (New England, or North East IPA), the hazy style has come to represent a very different flavor than that of the classic, west coast clear, but a third adverb started to appear a couple of years ago, the word juicy. What exactly is a juicy IPA?

The term hazy offers a visual of the turbid appearance of the NEIPA style, but does nothing to describe the flavor within the glass. Anyone who’s had a good hazy IPA knows that flavor and mouthfeel are just as important as the appearance when it comes to judging what we like bout this style. While the classic, clear IPA is highly bittered and has a flavor that combines grapefruit and pine notes, the hazy style utilizes varieties with tropical and stone fruit flavors. Breweries began using the term juicy to describe the softer, fruitier profile that usually accompanies the turbid, hazy IPA. The appearance of the NE style can vary from swirling to barely opaque, leading many breweries to drop the word hazy from the name, and start calling their softer, fruitier IPAs juicy instead.

The term juicy brings to mind intense fruit flavor, sweetness, smoothness, and fullness. If you’re going to call your product juicy, consumers are going to imagine the taste they want before they take their first sip, so these factors have to be in place to satisfy demand. Enter Walnut Creek, CA’s Calicraft Brewing Company, and their flagship IPA, “Cool Kidz”. The breweries website announces “Cool Kidz Juicy IPA, featuring all the cool hops! Our take on the modern-day, juicy IPA. Mosaic and Citra hops burst from the glass, bringing loads of bright citrus and ripe tropical aromatics. A malt bill filled with oats gives smooth body and balances the hops – giving a juice like impression and minimal bitterness. Move over standard IPAs, there’s a new kid on the block!”

Mosaic and Citra are hop varieties so ubiquitous that even new craft drinkers may be familiar with their names. While different breweries are known to use everything from spelt to flour to add turbidity to their hazy IPA, oats give a distinctive mouthfeel as well as luminous appearance to beer. With an overabundance of IPAs already on your store shelves, does Cool Kidz have what it takes to stand out from the crowd?

APPEARANCE: Cool Kidz pours a golden hue, slightly opaque with bits of sediment floating in my glass. This is not the swirling, orange juice murk that some breweries achieve, but this beer never advertises itself as hazy in the first place. The appearance is simply that of an unfiltered IPA. A dense layer of foam slowly dissipates, leaving a ring of sticky lacing inside my glass. 3.5/5

TASTE: Cool Kidz delivers on what the aroma promised. Lots of papaya and passionfruit notes with the slightly acidic, grassy zing that dry-hopping gives. There is a barely perceptible sweetness that adds to the perception of fruitiness. Very hop forward with little bitterness, just enough on the tail-end to remind you that you’re drinking an IPA. Light cereal notes are to be found mid-palate; my experience tells me immediately that I’m tasting the oats used in this recipe. It’s very slight, offering minimal support to a beer designed to showcase hop flavor. 5/5

MOUTHFEEL: Not as silky as the addition of oats would suggest. Not at all thin, but rather medium bodied, with just a hint of slickness that counters the slight astringency nicely. Just enough carbonation to compliment and balance the textures, leaving a very satisfying mouthfeel. 4/5

OVERALL: I’d heard a lot of good things about this beer which made me want to pick it up and review it for myself, and Cool Kidz delivers big on the promises. It didn’t look impressive at all compared to the contrasts of a beautifully opaque hazy or crystal-clear west coast, but this brew is all about hop aroma and flavor. I honestly can’t think of many other IPAs I’ve had that manage to capture and compress so much flavor into a can like this one does. I highly recommend Cool Kidz as one of my top picks for 2020. I picked a 6-pack up at my local Total Wine, I recommend you do the same!