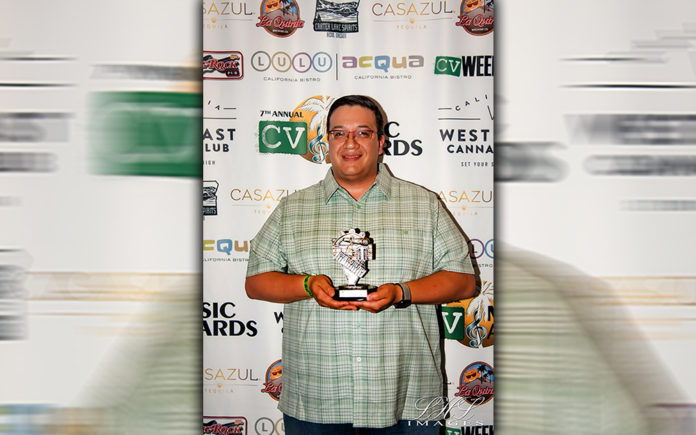 Brian Blueskye has had a whirlwind of a year. The former Music and News Writer at CV Independent is now the Arts and Culture Reporter at The Desert Sun, a position formerly occupied for over 40 years by desert icon Bruce Fessier.

To put the finishing touches on his success, Blueskye was awarded the 2019 Coachella Valley Music Award for ‘Best Band Photographer’ after picking up the camera again just a little over a year ago.

Originally from Mentor, Ohio, Blueskye moved to the desert in 2005. In 2013, he began his journalism career writing for the CV Independent as an Entertainment/Music writer and went on to become the Assistant Editor before accepting the job at The Desert Sun.

Blueskye came out of nowhere to capture many of the desert’s finest musicians as well as world-famous artists performing at Coachella, Stagecoach and other local live music events.

Coachella Valley Weekly spoke with the newest Desert Sun employee to ask about his win and new position.

CVW: How did you feel after you heard you were nominated and then actually won?

Blueskye: “I had some possibilities about it. I didn’t expect to be nominated or win it. I didn’t start shooting until last year so I was totally surprised when I was nominated. Especially with who I was nominated with. There are some really great photographers in there. I know that Iris Hall has been doing a lot of photography and has been at it for a lot of years. Chris Miller, of course, is a local legend as photography goes and the others too, there is some good talent in there. For me to have won that category, I’m still blown away by it.”

CVW: When did you find your enthusiasm for photography?

Blueskye: “I had the eye for it as a little kid. My grandfather bought me a cheap Fisher Price camera when I was a small kid. I took some interesting photos even as a little kid. Then I won a camera at ten years old through a school contest. The problem was, I had cameras through high school but I didn’t have a black room to develop film, so I didn’t keep pursuing it. It wasn’t until this digital age I started to perk up interest because you don’t need a dark room and you can do everything on the computer but then you had to learn Photoshop or Lightroom. So basically, I just jumped right into it last year. I had an idea about aperture, shutter speed and ISO, but I had to learn to work all that in unison. I practiced, and practiced, and practiced and obviously it paid off.”

CVW: How did you begin to incorporate your photography work in the articles you wrote for CV Independent?

Blueskye: “It was a lot easier. If we took photos with our cellphones, Jimmy Boegle, always wrote in, ‘CViCrapCam’ as a photo credit. I said to myself, ‘I wish I had better photos.’ I was at the mercy of guys like Guillermo Prieto and Kevin Fitzgerald who took photos for us. Guillermo actually has quite a portfolio, but he primarily shot bands that played Pappy and Harriet’s, not so much local bands. I was kinda left out, unless I was interviewing a local artist at Pappy and Harriet’s and Guillermo was lucky enough to get a shot of them. I didn’t really have good photos. So, it really helped to have my own. I built a portfolio of my own. It was great to go to open mics and learn about new artists who I had never seen perform. And to have those photos of them, it was helpful. It really helped the articles as well. Now that I’m headed to The Desert Sun, Bruce Fessier advised me to have something visual to give to them for every article. Having that helps.”

CVW: Where do you go from here regarding photography given your new position?

Blueskye: “I’d like to continue doing photography. Right now, I’ve maxed out the capabilities of my equipment. So, I’m going to have to build an arsenal of lenses. I will likely purchase a new camera with full-frame capabilities. I’m shooting with a half-crop sensor and the D7200 Nikon that I have is a great camera, but it has some limits to it, but it’s very close to having a full-frame camera. I really enjoy the camera. It’s smaller and not as heavy as the other ones, but I know I’m going to have to update it. Right now, I’m taking a little break and learning how to set up shots and basically learning how to re-work Lightroom and Photoshop.”

CVW: Is there a ‘best shot’ you can point to that encompasses your style? 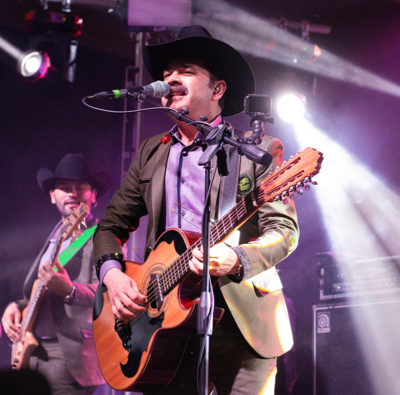 Blueskye: “I really like the shot that I got of Los Tucanes de Tijuana at Chella. It was a perfect moment and I was trying to go for it to capture all the waves of light that were shining on them. The shot that I managed to get was unreal. When I saw it, I knew it was going to be good through the keyhole. When I actually saw the shot and put it up on the computer, I was amazed how good it turned out. The band shared it and it went viral. I was really thrilled with that.”

CVW: Will you continue to shoot local artists and/or other types of photography?

Blueskye: “There’s been a few bands that have approached me about doing photo shoots. I would love to start shooting bands in our natural landscape. I really like landscape photography. I’m trying to learn how to master that. I really like taking portraits of people also. I’ve had some ideas about combining that with writing, especially when I see coffee table books.”

CVW: You’ve had some time for your Arts and Culture Writer position at The Desert Sun to sink in a bit. How are you feeling about it now?

Blueskye: “I think the shock has worn off. I really didn’t expect to be taking Bruce Fessier’s position. It all happened within a week. I went to interview Bruce for a CV Independent article and Bruce encouraged me to apply for his position and by the end of the week I had the job. That was shocking! I’ve had a few weeks to really digest it. Now I’m at the point that I know that when I go there, I have to perform. I have to work just as hard as I did at CV Independent, that’s my goal. It’s gonna take a lot more. I’m probably going to be learning a lot of new things that I haven’t done before. I feel that Jimmy has really trained me to be a good journalist. Jimmy is very supportive of the fact that I’m going over there, he said, ’everything that I taught you, is going to reflect at The Desert Sun, so make sure that it reflects well.’ I really want to make Jimmy look good as well as The Desert Sun”

CVW: You’ve received much support from artists, family and friends, not to mention Bruce Fessier himself, that must feel good.

Blueskye: “I’m very humbled by that. I’ve tried to be accessible to the local music community and to friends who were in positions if they had an event or if I couldn’t write it, I could tell them who to go to. I think feeling that come back to me and all that support has been a wonderful feeling. To have Bruce’s support in this job and for him to say at the CV Music Awards that he is excited to see what I do, I am just very blown away by that. I’m thankful to have his support as well as that of the local music community.”

CVW: You have been open and vulnerable about your renewed faith in the past year. How much does that rededication parallel your success?

Bluesklye: “It was last year that I decided to start going to church again. I decided upon my grandfathers’ faith, the Episcopal Church. I was raised in it a little bit when I was a kid. I was never baptized or confirmed in the church. I started going last year to The Church of St. Paul in the Desert. I went to basically see how I would feel after the first time. When I went, I was nervous, I was scared, but I found that the Episcopal faith is not anything that I thought Christianity as a whole was. It’s an amazing thing to get into and realize that I feel very comfortable in the Episcopal church and I do have a very deep love of God. I’ve gotten that thanks to the church. I feel that over the past year I found a lot more self-confidence, self-worth and a comfort in being who I am in the music scene thanks to God. I think this past year is nothing short of a miracle and I thank God every day for it. I just have to say that I got my spiritual house in order and it helped me going forward.”