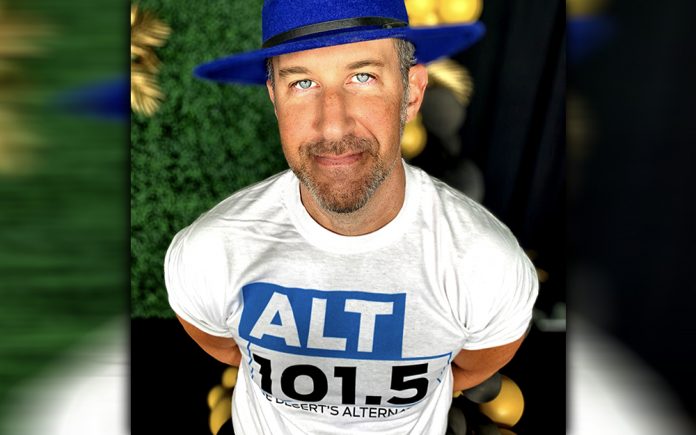 “It’s so nice being at a radio station where I love the music. I listened to this kind of music growing up in LA on KROCK, and now I get to play it out here in the desert, which is super rad,” shared Brian.

Brian moved to Palm Springs from Los Angeles in 1995 after graduating from high school. He began interning at a local radio station, and eventually landed a job at POWER 100.5, which later became MIX 100.5. He worked on-air as well as in productions, promotions, and sales.

Brian was with Alpha Media as a promotions director up until March of 2020 when the pandemic hit, which furloughed many employees. Brian launched his own brand, Buzz with Brian, during the pandemic where he continued to host interviews on Instagram Live and Zoom, eventually starting a website covering entertainment, music, pop culture and fashion news.

“The pandemic kind of put an end to everyone’s careers for a while. Buzz with Brian was my way of staying somewhat relevant with pop culture stories and keeping my contacts up-to-date during the pandemic. It definitely kept the boat afloat and eventually landed me at Marker Broadcasting,” said Brian.

Brian especially loves being able to play music that appeals to a wide range of people. Many of the music artists performing at Coachella are also being played on ALT 101.5, the Desert’s Alternative Station, like girl in red, Måneskin, Billie Eilish, Wallows, and Fatboy Slim.

“There’s not a lot of stations in the desert that really focus on the alt rock music scene from the 90s, 2000s, and today. You still get such a variety. The younger kids will hear Machine Gun Kelly and YUNGBLUD and that will appeal to them. For the millennial crowd, you also have Green Day and the Offspring to bring you down memory lane, or the TRL days with Blink-182,” said Brian.

To celebrate the return of the Coachella Valley Music and Arts Festival and Stagecoach Music Festival, Marker Broadcasting and Fantasy Springs Resort Casino are hosting two free festival concerts from 5 p.m. to 7 p.m. on Thursday, April 14 and Thursday, April 28 at the Rock Yard at Fantasy Springs in Indio. These pre-parties will feature live performances by some of the talented artists taking the stage at the famed music festivals. For those who do not have tickets to Coachella or Stagecoach, there will be a chance to register onsite at the pre-parties, where they will be giving out festival wristbands to several lucky winners.

On Thursday, April 14, the ALT 101.5 FM Coachella Pre-Party sponsored by Honda of the Desert will take place at 5 p.m. Headlining the festivities will be Norwegian singer/songwriter Girl in Red with opening act Whole Damn Mess. On Thursday, April 28, the Big 106 Stagecoach Pre-Party sponsored by Toyota of the Desert will feature country sensation Ingrid Andress along with other country acts. Live music starts at 5 p.m.

“The part of radio I love the most really is the music. I have such a passion for these bands. They put such hard work into their music and having the opportunity to showcase these tracks on radio airwaves is amazing. I also love interacting with the artists. It’s one thing to play their music, but it’s so different being able to sit down and talk with them for an interview,” stated Brian.

Brian looks forward to introducing the Coachella Valley to ALT 101.5 and continuing to take the radio station to the next level in the coming years.