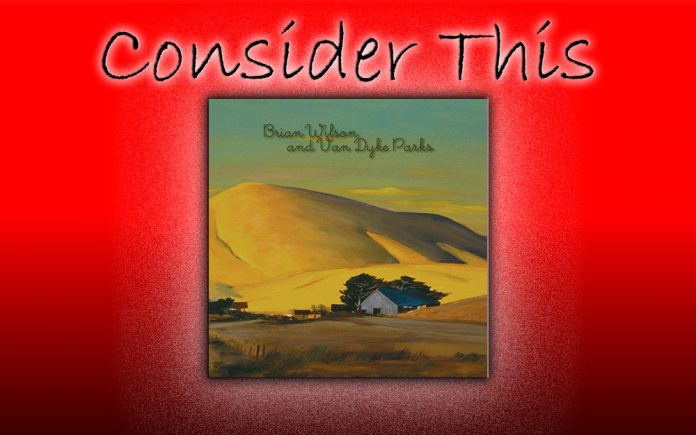 Brian Wilson and Van Dyke Parks were a couple of wunderkinds when they first began collaborating back in 1966. Brian, of course, had already earned a reputation as the leader and chief songwriter for the Beach Boys. Barely out of high school, Brian had figured out a way to fuse complex, Four Freshman-flavored harmonies with rollicking, Chuck Berry-fied melodies and instrumentation. When his younger brother, Dennis, suggested that song lyrics should reflect the Surfing and Hot Rod culture that were the epicenter of California cool that cemented their sound.

That was how it all started in 1962. Three years and an astonishing 10 albums later, Brian had stepped away from the exhausting grind of touring and was focused on honing the band’s sound in the studio. Collaborating with world class studio musicians that were dubbed The Wrecking Crew, he created intricate sonic soundscapes that surrounded the Beach Boys’ beatific harmonies.

In early 1966, they released their masterpiece, Pet Sounds, to rapturous reviews. English fans grasped the record’s significance immediately (in fact, it spurred the Beatles to conceive their game-changing Sgt. Pepper album). Most American admirers were slow to catch on. Perhaps they were confused by lyrics that no longer chronicled fun in the sun, sand and surf. Despite modest sales and vocal protestations from the least hirsute member of the band, Brian pressed on, enlisting Van Dyke Parks as a co-conspirator for his next magnum opus.

Van Dyke Parks was born in Louisiana and began playing the clarinet at age four. He sang in a children’s choir, displayed an affinity for Tin Pan Alley standards and began earning his keep as a child actor. He spent a couple of years as a music major at the Carnegie Institute Of Technology in Pittsburgh. But in 1963 he chucked his studies, in an attempt to escape what he termed the “highbrow angst” of academia.

Relocating to Los Angeles, he played music with his brother Carson and began making a name for himself as a lyricist, composer and arranger. He worked with everyone from Tim Buckley and the Byrds to the Harpers’ Bizarre and

Frank Zappa and The Mothers Of Invention. He didn’t warm to the Beach Boys’ music until the release of Pet Sounds. When he and Brian met, they recognized kindred spirits.

Over a period of four months, they went to work, pairing Brian’s brilliant melodies with Van Dyke’s articulate and idiosyncratic lyrics. The partnership yielded instant classics like “Heroes And Villains,” “Wonderful” and “Surf’s Up.” The album, was going to be called SMiLE and Brian proclaimed it a Teenage symphony to God.

Unfortunately, a follicly-challenged Beach Boy couldn’t reconcile some of Van Dyke’s more esoteric lyrics. Unable to feel the excitations, he ended up alienating Van Dyke and undercutting Brian’s confidence. Already feeling emotionally fragile and relying more and more on chemical enhancements, Brian opted to shelve the record. Old Man Beach Boy prevailed, although the band would pick the bones of the SMiLE sessions, inserting the odd song into other albums over the next few years.

For his final album on the Warner Brothers label, Van Dyke managed to lure Brian back into the studio. He created a song-cycle that paid homage to his adopted state, California, and no musician exemplified the California sound better than Brian Wilson. Additionally, there was a measure of symmetry involved in completing a project together.

The finished product, a 12-song set entitled Orange Crate Art, was released in late 1995. Despite its pedigree, the label (going through a major restructure), gave it no promotional push. Even though it received critical acclaim, sales were disappointing and lackluster. Happily, the cool kids at Omnivore Recordings are celebrating “Orange Crate’s” 25th anniversary with a lavish 2-CD reissue and a first-time vinyl release on orange vinyl.

The album kicks off with the title track. Sun-dappled acoustic riffs wash over a plucky string section and sparkly keys as Brian’s stacked vocals crest over an insinuating conga beat. The lyrics pay loving tribute to the color saturated paintings that adorned fruit boxes during the first half of the 20th century. Those renderings depicted the Sunshine State as a glamorous land of milk and honey and beckoned the rest of the country to migrate west; “Hear the lonesome locomotion roar, Hobo-hop if you dare/and it rolls where grapes of wrath are stored, stops on a bracero’s prayer.

And merrily the record rolls along, a nostalgic travelogue that whisks the listener back to the halcyon days of sunny Cal-if-or-nia. Stops along the scenic route starts with the breezy “Sail Away” which crafts an ornate mosaic of instrumentation: swaying strings, rippling keys, shang-a-lang guitars, the propulsive kick of vibes and steel drums, plus a fanfare of Mariachi horns. The bespoke arrangement hinges on Brian’s playful Doo-Wop vocals as he good-naturedly offers to “…Raise a toast to what’s left of my memory.”

The action hopscotches to the affable, emotion-packed epistle of “Palm Tree And Moon.” Rustic flute notes, wily keys and chunky percussion conjures up contradictory imagery of wide-open spaces and exotic ports of call. Brian’s dreamy voice is buttressed by layers of lush backing vocals as he sends out a romantic S.O.S.; “I put it in a letter, how could I love you better, and dropped it in a bottle in the sea/Put it in a letter, I don’t know where it went so, I went to Sacramento, said you were meant for me.”

Having Van Dyke at the helm, composing, as well as arranging, allowed Brian the freedom to just sing, and the results are exhilarating. He completely invests his whole heart and soul on both “My Jeanine” and “My Hobo Heart.” The former is powered by sawing jaw-harp, piquant acoustic guitars, continental-flavored accordion and brushed percussion.  Brian manages to wrap his wry vocals around some rather Van Dyke-ified wordplay; “I carry the torch for her in the orchard, apples were her last name, my Jeanine, my Jeanine, each tree would ignite with blossoms of white and apple her hair aflame, my Jeanine, my Jeanine/Jeanine in jean and calico, a streak of mean don’t let it show, so when she tells you let her go, her yes may be no, I love her so.”

The latter weds electric keys with liquid arpeggios and jaunty sleigh bells to an accelerated Cha-Cha-Cha beat. Brian’s harmonies are lattice in that familiar, sunshiny, Beach Boys style. The lyrics celebrate the reluctant domestication of a restless wanderer, a former Casanova; “And now my travelin’ days are through, and ridin’ horses in the sand, or walkin’ with you hand in hand will do.”

The best songs indulge bit of time-travel and celebrate what Nat King Cole once characterized as “lazy-hazy-crazy days.” On “Summer In Monterey,” breathless harmonies ride astride twinkly piano notes, home-on-the-range harmonica and a slightly hokey, clip-clop beat. A west coast companion to Patti Page’s “Old Cape Cod,” Brian’s wistful recollection returns to that brief, bucolic time between World War II and Vietnam, when (seemingly), America’s exceptionalism was on full display; “Wasn’t so long ago, that every year your family would rent a house from June to Labor Day, summer on Monterey.”

“San Francisco” blends angular, Far East keys with a giddy-up groove. The sly instrumentation and Brian’s impish vocals manage to  mirror lyrics that find an ol’ cowpoke pining a good-time gal he once knew in the city by the bay; “I can’t go from ‘cisco down to ‘frisco, how I’m missing those days of yore/Miss those frisky women, raw rye whiskey, with each kissin’ we would explore El Dorado, for this desperado was gold in the dust/Like many a man in God I do trust, gave up on El Dorado, so lost in my lust where love is not for sale out on the end of the trail.”

Finally, “Movies Is Magic” is appropriately cinematic. Shimmering guitars, crisp keys, plush strings and dulcimer notes are anchored to a rock-steady beat. An expansive ode to the power of celluloid, Brian’s ebullient harmonies match classic silver screen drive-in imagery; “Sky lit up like a jukebox for a dreamboat Delta Queen, rain dropping all around, put up the top you clown/And turn on the Nat King Cole, off with the Rock and Roll, to the movies and magic.”

Other interesting tracks include the Tropical-Mariachi shiver of “Hold Back Time,” the rainy day whoosh of “Wings Of A Dove” and the kaleidoscopic carousel of “This Town Goes Down At Sunset.” The set closes with the autumnal ache of the instrumental, “Lullaby.”

Of course, Omnivore being Omnivore, they add three previously unreleased tracks on the first disc. Matched by Van Dyke’s impeccable arrangements, Brian gets his croon on, covering three Great American Songbook standards. Two Gershwin favorites, “Rhapsody In Blue” (a record he played endlessly as a musically precocious toddler), and “Our Love Is Here To Stay.” On the former he adds wordless vocalese that renders the song all the more poignant. The latter hits the sweet spot with layers of Four Freshman style harmonies. The final track is a sharp and sincere take on Louis Armstrong’s “What A Wonderful World.” There’s also a second disc that previously unreleased instrumental versions of each song.

Although Brian Wilson successfully revisited the “SMiLE” material in 2004, and even the original recordings saw an official release seven years later as “The SMiLE Sessions,” none of that would have been possible without this 1995 summit.

There’s something miraculous and magical about “Orange Crate Art.” A technicolor tribute that waxes nostalgic without ever sounding coy or saccharine. The music Van Dyke and Brian create here is as vivid and inviting as art that inspired it.