With their first release in three years, brightener is prepped to deliver “Stay Open”, an EP of diverting and introspective songs about lost love featuring the note-perfect musical skills of commandant Will Sturgeon. Sturgeon plays all the instruments on the album and produced, mixed and mastered the four songs autonomously.

Having already accomplished the goals of making a living through music and performing at Coachella Valley Music and Arts Festival, Sturgeon has deliberately placed himself and brightener in positions to succeed. The first single, “Runaway,” will be released this Thursday, April 30, 2020, on all digital platforms.

Coachella Valley Weekly spoke with Sturgeon from his home workshop The Sturdio. 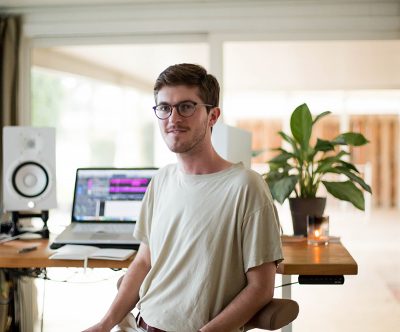 CVW: Congratulations on “Stay Open”! What can you say about it now that it is complete?

Sturgeon: “I really wanted to make it digestible and put the cream of the crop forward. I did it all myself. I’m used to writing and recording music and have done a lot of mixing at The Sturdio but I haven’t done mastering so this was the first release that I have mastered as well. I did literally everything on the record, which is scary but I’m pretty excited about it. It’s been nice having all that time doing all my Sturdio projects over the past couple of years to really hone all those skills and bring them back to a brightener project.”

CVW: After listening to the songs, I get the feeling that you are a lot more versed in R&B than previously known.

Sturgeon: “I listen to a lot of R&B. Anderson Paak is one of my favorites for the past five years and Tom Misch has been amazing. I’ve gotten to a point where I just wanna make people move more than just sing sad singer-songwriter songs.” 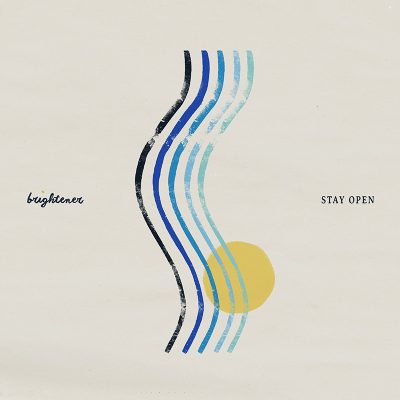 CVW: So much can be interpreted from the title but what does it mean to you?

Sturgeon: “Essentially, the whole EP, specifically, is about wrestling with letting-go of a particular relationship and “Stay Open” the song is about urging myself to try and stay open to new things and new relationships.”

CVW: These songs are a definite variation on the brightener sound. What are your thoughts on its divergence?

Sturgeon: “I hope people like it, I hope people want to listen to it, it’s a departure stylistically. The biggest noticeable change from past brightener releases is it has some R&B and is a little funky at times. I’m trying to write concise pop songs, songs that get stuck in your head. I’ve been delving simultaneously into electronic music. While that didn’t directly influence this, I’m a lot more comfortable using electronic sounds and I’m using sounds that I have accessible to me in my studio. There’s a lot more synths. The song “Runaway” is the first single that doesn’t have a guitar on it. A lot of it is based around my Roland Juno 60, a synthesizer I got about 6 years ago. It’s a really classic synthesizer from the 80’s. “Runaway” is all Juno stuff, which sets a different mood from what people are used to from brightener, at the same time, it’s still my voice and music, I think it makes sense in the brightener discography.”

CVW: How daunting was the task to helm the entire ship alone?

Sturgeon: “Not particularly daunting, it’s one of the reasons that I started The Sturdio. As an artist, I’ve done the songwriting piece. I love arranging music and I’ve had experience with recording and mixing. I didn’t have much experience with mastering, which is the final piece of the puzzle. That took a while to learn to do that for my own songs. The biggest challenge of doing it all myself is having perspective on it because I have to be really minute about every detail and I have to look at the big picture; where’s the song going, does it sound good, does it sound good compared to everything else. It was a big process. These songs have been floating around with me for about two years. At this point, I’ve had a lot of great experiences which has made it not as daunting as it might seem.”

CVW: I’m still floored by your accomplishments and what you have built with your alias.

Sturgeon: “I’ve had a live band with brightener, but as a recording project, it’s always been solo. Make Real Friends, our first EP, was just me in my room. I had someone else mix and master which meant only one other person was involved. Hummingbird was a much bigger process, at the end of the day I played most of the instruments; I worked with a handful of people. Headroom, which was the last release, was mostly solo with our drummer who recorded drums with another dude from out here. All the other brightener releases had some sort of influence by other people but it’s been very much driven by me, this was one more step in that direction.”

CVW: Would you say you’re a bit of a perfectionist when it comes to recording your own music? 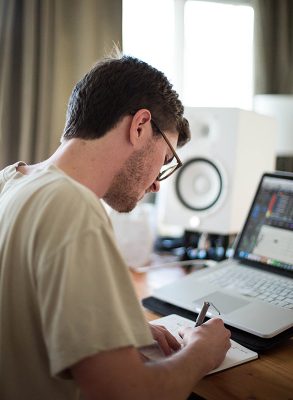 Sturgeon: “The past month has been challenging, getting the songs 80% of the way there when you’re alone was not that hard, it was that last 20% of making sure everything is right and perfect. Every day for the past two months I’ve been saying, ‘I think the EP is finally ready’ and the next day I would say, ‘I have to tweak this little thing.’ brightener has always been very much a personal thing and I just dug deeper into that this time around. When I put out Make Real Friends, which was the closest thing to this EP in terms of the process where it was just me doing everything on the record, I had a bit of a panic attack before I put out Make Real Friends, I said, ‘I don’t know if this is cool, I don’t know if people like this,’ I had no real input during the process to straighten me out. With this EP, I’m not feeling as nervous or panicked about it. I feel much more confident in the music and my ability to make professional sounding recordings. brightener, for me particularly the last couple of years, has just been a part of my life instead of my entire identity which helps keep me more sane and more grounded. I have plenty of other stuff going on. I really like these songs and I hope that other people will as well.”

CVW: brightener has always had a visual element to its music as well. What can you share about the artwork for this EP?

Sturgeon: “The album artwork was done by artist Stephanie Kuse (sckuse.net), she’s Canadian and comes down to the desert once a year. She is great. She’s done all the brightener artwork since Hummingbird. She also completed a series of paintings for the singles as well as the album artwork.”

Below is the Coachella Valley Weekly review of “Stay Open”:

A down-right engaging first song that’s strong on synthesizers and dreamy on vocals. It has that R&B tinge with a weaving beat. Sturgeon’s falsetto is reminiscent of El DeBarge and his provocative voice. “That’s when my gut kicks in, runaway, runaway” The thought of running away from someone demonstrates that maybe you’re running from more than just the other person.

An enjoyable track, more uptempo than the first. The drums drive this song about the vulnerability of staying open to love. “So I’ll try a new thing,

See how it goes, Try to stay open to fall in love”. Many of us have been there. We can’t go back, but moving forward seems even more difficult. The fact is, if we stay open, we allow healing and possibilities.

Another lively feel-good song with a not so happy theme. That redemption from love, that feeling of not being able to see beyond the lost love and consider what may be in front of you. “I could imagine it, Growing old with you, I was all in, Couldn’t live without you.” Time is the only mediator. 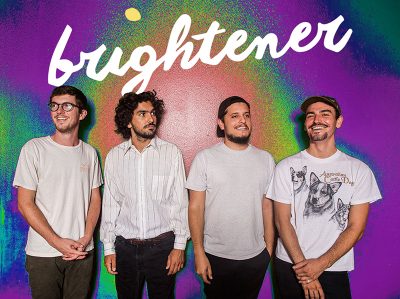 Find more about brightener below: