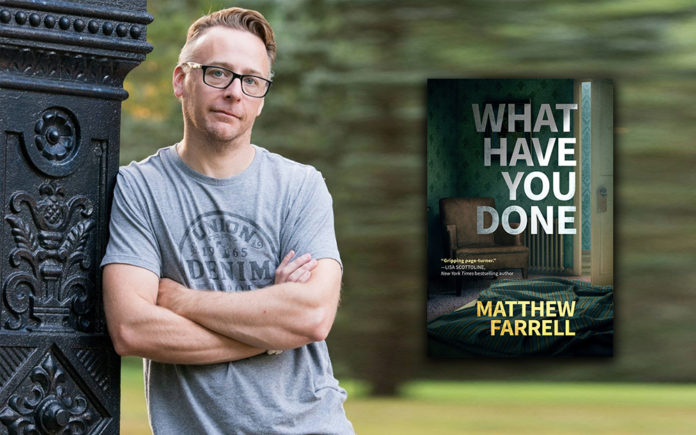 —–
What Have You Done
by Matthew Farrell – Fiction
—–

Siblings can be so much fun and they can also be a pain in the ass. Love them or hate them, they are family.   In Matthew Farrell’s debut novel What Have You Done (Thomas & Mercer, 303 pages) sibling rivalry turns deadly.

Two brothers share a horrendous and tragic past.  After the death of their father, their mother attacked the young boys in a murder-suicide attempt.  The eldest, Sean, took a terrible beating and was barely able to save his little brother, Liam, from being drowned in a bathtub.

Without parents, the two lived with their grandparents and depended on one another for love and support.  Sean took on the burden of caring and protecting Liam, which carried on into adulthood.

Now they both have careers in the police department.  Sean is a detective and Liam is a forensic scientist.  The men are known and liked in the department.  Their fellow officers are their extended family.

When Liam’s secret lover is a victim of a brutal murder, the brothers fear they will be suspects in the case.  But Sean and his brother want to find the killer first so they tell no one in the police department that they knew the woman.

Soon things start to get complicated for the brothers as the evidence they gather starts to point to Liam.  Did he blackout?  Have a psychotic break?  The evidence is all pointing to Liam.  Fingerprints, DNA, cell phone records all place Liam at the murder scene — and Sean as well!

Sean obstructs justice and destroys evidence to protect his brother, but how long can he protect him when more dead bodies revealed with the same strange MO?

Too often we have heard the horror stories of mothers killing their children.  For those who survive, it is hard to imagine how they can ever fully recover and have a normal life.

In What Have You Done, Liam still has nightmares and he lives with real fears.  In the story he gets no treatment or counseling for his past trauma, only marital counseling.   When the deceased woman broke off the affair, Liam went with his wife to try and make their relationship work again.

What makes this story so engaging is the police work and forensic science, especially since the suspect is collecting and analyzing evidence on himself.  Liam is taught to follow the facts and clues, so how can it be someone else if it all points to him?  This is where the story really shines.  However, I wanted a lot more science.  When it comes to brothers, how similar is their DNA, hair, and blood type?

The psychological elements could have been much stronger as well.  The blackout/ missing-time trope could have been really convincing if he was in hypnotherapy for his past trauma and bad dreams.

The reader never discovers how Sean and Liam’s father died – mental illness, a heart attack?  This would have been psychologically compelling in the unfolding mystery as we better understand the dark minds and actions of the troubled brothers.

Also, we never know what the dead girl did for a living and how the brothers knew her, met her and why they loved her.  But the story develops quickly and didn’t waste time on red herrings or too many false assumptions.

Ironically, the story is set in Philadelphia – the city of “brotherly love” — and when all is said and done, Sean and Liam share a great deal more than the blood that curses through their veins.