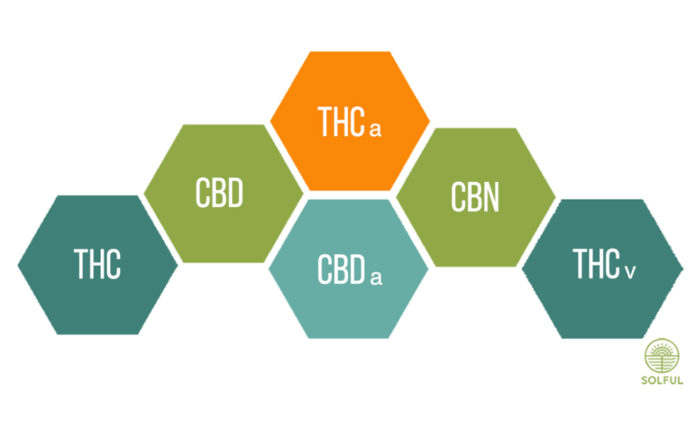 We all are well acquainted with famous cannabinoids such as THC and CBD. But what about the other cannabinoids? There are 8 major cannabinoids produced by cannabis–CBGA, THCA (which breaks down to CBN), CBDA, CBCA, CBGVA, THCVA, CBDVA, and CBCVA. After decarboxylation (being exposed to heat) the previous cannabinoids become CBG, THC, CBD, CBC, CBGV, THCV, CBDV, and CBCV. While THC is the famous sibling of the cannabinoids with its notoriety being that it gets you high, other cannabinoids do not serve the similar function.

While some cannabinoids are only stimulated by decarboxylation (being heated), others do not need heat to be utilized. In most cannabis strains THCA and CBDA are the most abundant cannabinoids found. Unfortunately THCA turns into THC when decarboxylated so wellness benefits associated with THCA such as inflammation and pain relief aren’t received through smoking. Instead, users can find the use of the cannabinoids through noncombustible methods such as Papa and Barkley salves and tinctures or Mary Medicinals THCA or CBN patches.

Another popular cannabinoid coveted for its weight loss due to being an appetite suppressant is THCV. THCV can also produce a slight psychoactivity but isn’t found often in popular strains and instead is in the very rare Durban Poison. Cannabinoids can indeed age as well. Have you ever hid a stash from yourself only to come back to it and find that it just so happens to put you straight to sleep regardless of the strain? That my friend is due to THCA being turned into CBN–a sedative cannabinoid! With time and exposure to oxygen this transition takes place. Not only is it sedative nature helpful for insomnia and other sleep related concerns, CBN can also be taken alongside THC to be anticonvulsant, anti-inflammatory, and antibiotic!

The scope of cannabinoid function and behavior is a very under researched aspect of the cannabis plant similarly to terpenes and dosage of this plant. As always it is important to remember that although in California and 32 other states it is regulated and a commodity, it is still federally illegal. This limits the amount of research that can be done on this plant. The FDA, National Institute of Drug Abuse, and DEA will not authorize claims made regarding cannabis, its cannabinoids, or its myriad of benefits. It is crucial that we continue to progressively move towards federal legalization and communicate with our local and state policymakers to make sure that our voices are heard regarding the future of cannabis in the US.