Can’t Stand Losing You: Surviving The Police the rockumentary based on the  acclaimed memoir of the legendary guitarist of the British new wave trio The Police, Andy Summers is coming to Palm Desert. The feature-length film, features Summers, Sting and Stewart Copeland, and tells of the band’s meteoric rise, headline-grabbing break-up, and reunion twenty years later, through rare archival footage and Summers’ personal collection of photographs. Fans lined up to see the film when in premiered in New York and Los Angeles, and the film continues to widen its release when it comes to the Cinémas Palme d’Or on Friday 4/17 for a commercial run.

Directed and edited by Andy Grieve, who recently edited “Going Clear: Scientology and the Prison of Belief,” “The Armstrong Lie” and “We Steal Secrets: The Story of WikiLeaks”, the film tells of Summers’ musical journey from his early days in the London music scene to his chance encounter with drummer Copeland and bassist Sting and the formation of the neo-punk trio, The Police in 1977. From struggling musician to international ‘Rock God’ in two years, Summers’ camera captured the rollercoaster ride to fame and the Faustian trade-off between unprecedented success in the MTV era with love and creative freedom. The film starts as Summers’ prepares for the band’s highly anticipated 2007 reunion tour, recalling the 1983 Shea Stadium concert the marked the end.

Based on the acclaimed memoir by renowned guitarist Andy Summers, Can’t Stand Losing You: Surviving The Police follows Summers’ journey from his early days in psychedelic ‘60s music scene, when he played with The Animals, to chance encounters with drummer Stewart Copeland and bassist Sting, which led to the formation of a punk trio, The Police.

Over the course of the band’s phenomenal rise and eventual dissolution in 1983 at the height of their popularity, Summers captured history with his candid photographs.

Utilizing rare archival footage and insights from the guitarist’s side of the stage, Can’t Stand Losing You: Surviving The Police, brings together past and present as the band members reunite, two decades later, for a massive world tour.

The film was produced by Norman Golightly, Nicolas Cage, and Bob Yari, and features an original score by Summers, who is also an Executive Producer. The reunion concert footage was directed by Lauren Lazin. North American rights were by Cinema Libre Studio from Yari Film Group in a deal negotiated by Executive Producer William J. Immerman and Cinema Libre Studio’s CEO, Philippe Diaz.

The film, which was brought to the attention of Cinema Libre Studio by Mandy Ward and Johanna Bennett, co-founders of the First Time Fest, will be released on DVD, Blu-ray, and On Demand platforms starting in July preceding a television broadcast.

The Police are considered one of the top 80s rock bands and have won six Grammys ®, two Brit Awards, an MTV Video Music Award, and were inducted into the Rock ‘N Roll Hall of Fame. Four of their five studio albums appeared on Rolling Stone’s list of Greatest Albums of All Time.  Their best known songs include: “Can’t Stand Losing You,” “Message in the Bottle,”  “Every Breath You Take,” “So Lonely,”  “Walking on the Moon,” and of course, “Roxanne,” the lyrics known worldwide. The trio was featured in the iconic “I Want My MTV” promotional campaign. Their final studio album, Synchronicity, topped the American charts for 17 weeks and was number one in both the UK and the US, and sold over 8 million copies in the US alone. They have sold over 75 million records, making them one of the world’s best-selling artists of all time.

The band reunited in 2007 for a highly-anticipated world tour that covered the globe and continued into August 2008. The success of the tour made them the world’s highest-earning musicians in 2008 and 8th top grossing tour of all time. 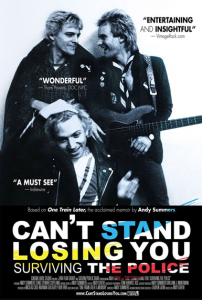