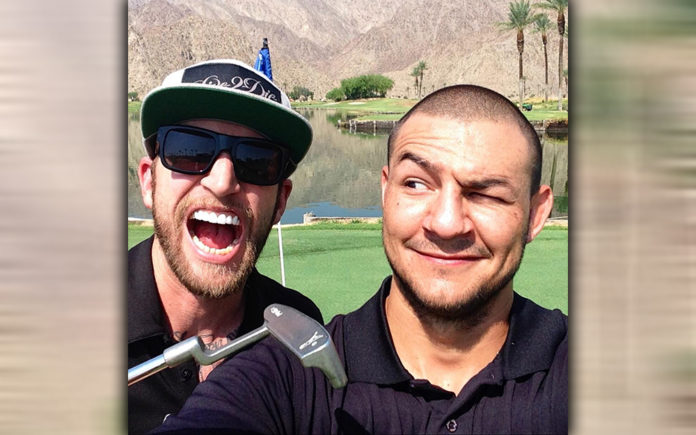 There is a new vacation rental located in Bermuda Dunes that caters to both out-of-towners and any Desert Rat wanting the ultimate ‘stay-cation’. Not only is it unique in its own right, it is brought to you by the team of Bauer and Swanson. Power broker Anthony Bauer and UFC phenom Cub Swanson have been friends for a significant amount of time and have refined their rapport to become business partners. Swanson shared, “We met each other just being around. We’re kind of alike but also complete opposites. We’ve developed a friendship and we’ve collaborated on many things. He’s always trying to be successful and so am I, so we kind of always remained supportive of each other.” Bauer has supported Swanson in and out the octagon and Swanson has developed into quite the businessman with Bauer’s encouragement. Casa De Palmas opened just before Coachella 2018 and sold out in minutes!

Casa De Palmas showcases three separate and one-of-a-kind themed 2-bedroom villas. There is the Coachella Suite, the Palm Springs Suite and the Joshua Tree Suite. In total, the compound can accommodate 16+ guests in 6 bedrooms and features a centralized pool, outdoor fireplace, barbecue, a game room that includes foosball and a billiards table. With 9 beds and 4 baths, anyone who wants to include their loved ones in a family getaway will have more than sufficient space for their in-laws. If you’re looking for a more romantic stay, you can also rent the individual units at a discounted price.

After talking about their newest endeavor, Coachella Valley Weekly spoke with Swanson about his fight career and how things are going. Coming off a loss, Swanson was gracious enough to talk UFC and a little about himself. With a record of 25-9 and a consistent top 5 Ultimate Fighting Championship featherweight ranking, Swanson continues to be a top draw and a fine representative of the desert.

“The thing that really connects us is that we want things that a lot of people want but they don’t want to grind to get it. That’s something that’s missing in the desert. A lot of the mentality in the desert is just to ‘get by.’ I lived in Orange County for a while. I really saw that a lot of people are not like that in other places. It just gave me a different outlook and being with Bauer is refreshing so we’ll be doing big things together.”

On Dreams and Drive

“Being in high school, I saw my brother’s friends and my friends get into four year colleges and say they’re gonna do this and do that and then they come back to the desert. It was always the joke, it always brings you back. They had these big dreams and just came back and settled. Part of me chasing my dreams is showing people that you can go out there and do it. If you want to settle and live your life and have a regular job or focus on your family then that’s cool too. But if you really want to be great at something then get after it.”

On Mistakes and Change

“I always thought that I would be successful at something when I was young. Then I got on a path where I stopped going to school and I started to hang out with people that didn’t really care and I thought that was cool. I started to think about what was best for me right now and not what was best for me down the road. I was completely able to block that out. I was just focused on the now. That took me to a place where I don’t know if I’m going to be able to afford my own place or car or the essentials in life and I was just disappointed in myself. So I decided to make a change. Once I found martial arts, which was by accident, I had such a drive to compete. If I give fighting my all I’d like to see how far I can take it.”

On Cub the Inventor

“What made me successful, without even realizing it, was that how I approached fighting was the same in business. That was a huge breakthrough to kind of realize all of these new things that I’m doing I’m learning so in the fight world every time I fail or fall short I didn’t see myself as a failure, well, maybe the first couple of times, but then I realized that it’s the person that I built to compete, the machine that I put together. I’m the inventor and I put my invention out there and it’s a prototype. I’m trying to chase that final piece. When I go out there and I don’t do so well I can look at it from an outsider perspective and say I did this, this and this wrong. When I go back to the drawing board I’m going to fix those things and I’ll come back stronger. That’s been able to make me successful and really be able to pick myself apart and be honest with myself and say, ‘OK, you have to better at these things.’”

On Being an Ambassador

“It’s been very important to me just to stand for something, that’s why I have ‘So Cal’ on my chest and palm trees on my stomach because I knew that one day I would be on television and I would represent where I’m from and this is the story of who I am.”

“Now, when you see a car pass by with a Coachella sticker, it’s a 20 year old blonde girl but back in the day if it said ‘Coachella’ it was a ‘cholo.’”

“I’ve been back it. Some small injuries have kept me from pushing too hard. I’ve been doing it a long time. This last fight was a difficult one just because I felt like I did a lot of good things. I got the biggest ass-kicking I’ve ever had in the first fight and I was able to completely nullify that in our second fight and I only had three weeks to prepare for it. I took a lot of pride in that but then everybody is still shitting on my performance. I understand I could have done better but I was happy with the things I accomplished and I realized there are things I could have done better. I figured with the time I had to prepare it wasn’t that killer for me. It’s not like I had a whole camp and he still beat me. It was a unique fight to have to deal with.”

On His New UFC Contract

“I have four fights left in this contract with UFC. I plan on fighting for a few more years. I kind of have a goal in mind of making a certain amount of money. I’ve been planning my retirement for a while. That’s why I’m doing these things with Bauer. I own a gym in Costa Mesa. I’m trying to do things all over the place. I’m trying to make sure when it’s all said and done that I’m taken care of. People assume that because I’m on TV that I’m a millionaire. That’s not the case at all. You’ve got to work hard for it. Sometimes when you lose you don’t get paid very much. When you do make good money you gotta make the right moves. That’s what I’m trying to do. I’m trying to set up my future. I just started a family and it’s my job to take care of them.”

On Cub Swanson – The Brand

“When you start to have name recognition and all these things start to happen, it’s funny because many say people change but everyone else changes too. People just treat you different. It can change the way you feel about yourself. The thing to remember that’s most important is to always remember who you are from the beginning and that’s gonna keep you from having all the people that are there to take from you and not want you to succeed.”

“I definitely think a lot of younger people could learn from me. As far as business, I have a lot to learn that’s why I’m doing it with people I like being around and people I trust and that’s how I’m learning so I’m not having to worry about being screwed over. Like the branding of my name, I had to dig deep because I’m not a talker. I’m not a huge personality. I’ve always believed that I just go out there and let my performance do the talking. People like those personalities. Instead of giving in and being somebody who I wasn’t I worked my way around it and I built a character, a logo and I pushed that and I was able to build a brand and make it unique and have built a bigger following instead of giving in and doing it their way. I found another way to do it and I’m proud of it. There’s ways to do things, you’ve just got to figure it out and be creative, be who you are. One thing I’ve always been is stubborn and I’ve made that one of my strengths not one of my weaknesses.”

“I told myself that if I was going to keep doing this, because I came close to stopping a couple of times with some bad injuries, I told myself that I was going to be 100% honest with people. It can be tough because it makes you vulnerable. You make yourself a bigger target to be attacked. But I felt I just want the fans to know what’s going through my head. I want them to know what I’m thinking at that moment. I want them to know if they ask me a direct question I want to answer it. I’m not the type of person to sugarcoat things or lie about things that’s just not in my nature. I just wanted to be who I was and be 100% honest. You realize how many people you are impacting and inspiring. I see myself with a niche of inspiring people. Just knowing that makes it worth it. They see me getting down and pushing forward trying to always get better.”

The truth is, Cub Swanson and Anthony Bauer are two of the Coachella Valley’s finest CEOs and humanitarians. They present themselves with honor and validity because it’s ingrained. They continue to contribute to their community and recognize that initiative and resiliency will propel them and this area to prosperity.