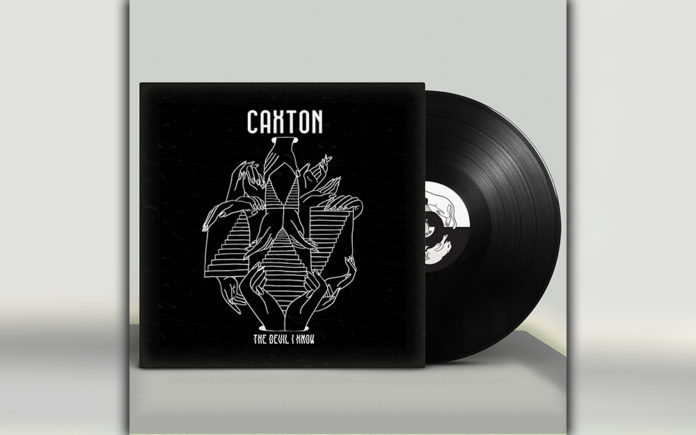 The long awaited second release, The Devil I Know, from the now interstate band Caxton will be available on vinyl and digital platforms everywhere Saturday, March 30, 2019. Christina Reyes, vocals and keyboards, Adam Surdin, guitar, Brett McLaughlin, bass and Brian Pelletier, drums, are seemingly distant from their 2011 release, Plotting A Murder, but they continue where they left off and then some. The album is liberal Caxton and its members have illustrated what you can achieve with durability, devotion, mutual discernment and appreciation in long distance relationships. Caxton provided Coachella Valley Weekly with a mastered version of the album. Below is our review.

The Devil I Know

You know you’re approaching enlightenment when your sound is distinct enough to be recognized by those first few notes. This is the next step in the evolution of Caxton. It’s dark and has that familiar Caxton stroke and strum while having an air of maturity both lyrically and musically. ‘Queen Christina’ is still one of our finest Coachella Valley voices despite her physical absence. We hail her here. This is the title track and first single. The video for this song are spliced excerpts from a black and white Dracula film. It’s a fitting pairing and analogous.

This is beyond ‘Third Wave Ska’. This continues not only the natural process of the band but of the genres of music they are capable of playing. It’s up-tempo and incorporates keyboards admirably. It has that happy-go-lucky inflection. Something tells me this is more than just a women’s liberation anthem, “This won’t be the last time you see me.”

Inspired By the Liar

The intro is trippy and ‘cybertronic’ leading into guitar. Explicitly a straight-up rock song and Surdin’s guitar skills are illuminated here as it transitions to a more mellow sensation and back again. The lyrics tell the tale of how we can be stirred by the borderline personality type, “It is impressive though, how there’s no shame.”

McLaughlin’s running bass line kills. A more sinister resonance here. There’s a thickness and misery accent to this tune. Reyes has that ability to vacillate between genres, vocal styles and registers. She intuitively fits her delivery with the character of the song. She lays down what the song needs.

A reason why I carry on about Caxton to anyone who will listen. This song fits in the scheme of the album for me because I’m extremely familiar with it. I first heard Caxton in the late 2000’s and I’ve been under the influence of their sound ever since. This mellow anthemic message of possibility is, dare I say, vintage Caxton.

Opening scene: I picture a dinner crowd. You hear the keyboards, strings, and vocals from Reyes. Pan to Reyes sitting on a horse on a carousel dolled up in French garb. Jump cut to the band performing once the playful beat kicks in. Its lyrics, “It’s pretty simple, so many people seem to find a way, to keep the lights on while eating bonbons,” reveals the tough times in a relationship and how just getting through the day is an accomplishment. Out of sight vocal harmonies from Reyes.

What We’re Made Of (Old News)

Heavy drum roll and build up by Pelletier that welcomes the punk aspect of Caxton rolling into their representative alternative indie feel. A more optimistic theme with the lyrics, “We’ve got this far not to succeed.” One of my favorite songs thanks to the synchrony between Surdin’s guitar and Reyes’ vocals.

The Man Behind It All

Epic song. Gives me the Beatles-esque vibration. I have witnessed Reyes standing playing her keyboard and wail in the most standout way. She and the band are distinctive in their live performances and we have proven that we don’t know what we’ve got until it’s gone. The Coachella Valley is in for a treat on 3/30/19 at the Date Shed in Indio, CA.

A gallop-type tempo with a Country/Americana sound. Reyes begins by singing, “They’re in an uproar, start seeking shelter this is bound to be a war, it’s in their blood, it’s in their toes and it’s in their bones and it’s the only thing they’re hungry for,” then she replaces the pronouns “they’re” and “their” with “we’re” “our”. Presumably communicating that if you can’t beat ‘em, join ‘em!

The perennial funky closer. The song appears to be an ode to that person who believes they are the shit. It has that 80’s buzz with synth sounds and syncopated lyrics, “Aren’t we so lucky to breathe the same air as you?” It’s condescending and sarcastic spirit is a welcome finish to the culmination of Caxton’s victorious sophomoric effort.