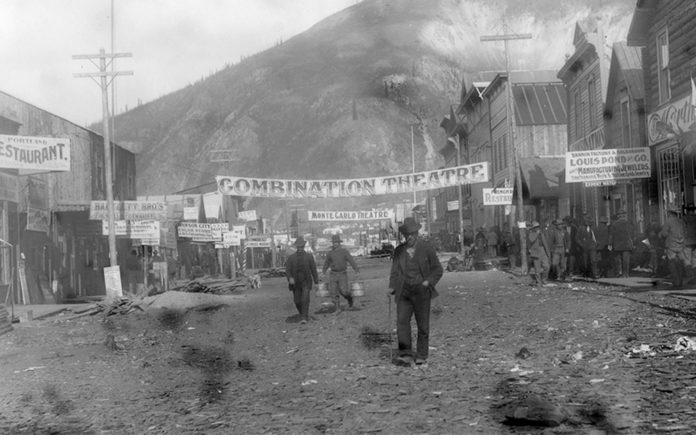 Bill Morrison’s utterly mesmerizing found-footage documentary brings to life the bizarre true history of a long-lost collection of 533 century old nitrate film prints that were unearthed in 1978 under a hockey rink during a construction project in a former Klondike Gold Rush town.

This astonishing film is nothing less than a history in still and moving images of the transformation of Tr’ochek, a fishing camp where the Yukon and Klondike Rivers meet, into the epicenter of the Yukon gold rush at the turn of the previous century. But more than that, it’s also a history of the 35mm film prints that were shipped to Dawson between the 1910s and 1920s, then hidden away and forgotten for 50 years. The restored long dormant images create a vibrant cinematic mosaic that, like most of Morrison’s film work, is a strangely haunting experience that transports the viewer to a surreal headspace of suspended nonlinear time.

I suppose the main point of this film is that the film prints were buried during a time when not much thought was given to their historical value. Morrison’s documentary is also about a Native American settlement that was muscled out of existence by white settlers trekking north during the gold rushes of the 19th century. The film details boom and bust cycles of Dawson City itself, which burned to the ground once a year for the first nine years of its existence!

Especially fascinating are the incredible tales of the famous fortunes made in this remote outpost. I was surprised at the inclusion Frederick Trump, the president’s grandfather, also the future Hollywood pioneers like actor-director William Desmond Taylor and theater entrepreneurs Alexander Pantages and Sid Grauman who, unexpectedly, got their start in this out-ofthe-way locale.

As silent motion pictures gained worldwide popularity, Dawson City became the end of the line for film distribution. After a given picture’s run, many distributors balked at paying for return shipment. The town inadvertently came to house a huge film library, which was eventually sent floating down the Yukon. Except, that is, for a portion that was buried, for an odd and arguably hilarious reason.

Still playing in Pasadena and Beverly Hills, look for it locally at Camelot or Tristone 10. No date set at. Recommended.

Director Terry George’s (Hotel Rawanda) relevant story of attempted Armenian genocide at the hands of the Ottoman Empire during WW I has already met with harsh criticism from those who still embrace racial and religious bigotry. Hitler referred to this ethnic massacre as proof that he could get away with his “final solution” re Jews. 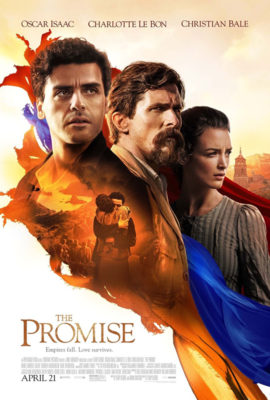 It’s disappointing that this lavish, big screen version of such a painful chapter in human history was not more fully and accurately recounted and that earlier incidents dating back to 1885 were never mentioned. The film – a love story — focuses on humble, brilliant medical student Michael (Oscar Isaac) who meets beautiful dance instructor Ana (Charlotte Le Bon) in late 1914. Their shared Armenian heritage energizes an attraction that explodes into a romantic rivalry between Michael and Ana’s boyfriend (Christian Bale), an American photojournalist who’s dedicated to exposing the truth about the widespread killings. As the Ottoman Empire implodes into bloody, war-torn chaos, their conflicting passions are put on hold as they unite to get themselves and their people to safety. This beautifully crafted film recreates a time and place that is as convincing as it is moving and harrowing. Recommended. Universal. Blu-ray. Comments? robinesimmons@aol.com