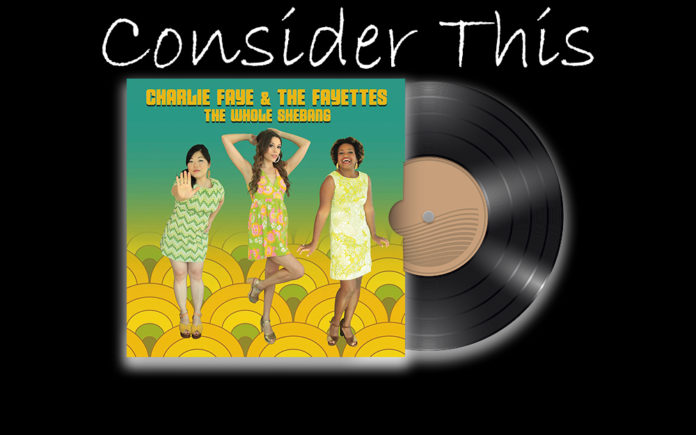 Looking for a cure for the Winter time blahs? Charlie Faye & The Fayettes have a musical remedy. Their new album, “The Whole Shebang” doesn’t guarantee that it will put a bounce in your step, but to paraphrase a classic Byrds song, you’re gonna feel a whole lot better when they’re done.

Charlie Faye wasn’t one of those musical child prodigies; the New York native really began exploring Blues and Bluegrass just as she was finishing up college in (of course), Philadelphia, the City Of Brotherly Love. She learned to play guitar and mandolin, and soon she was making music with artists like Greg Garling and Dan Zanes.

Originally influenced by singer-songwriters like David Baerwald, Rickie Lee Jones and Lucinda Williams, she began writing her own songs. She relocated to Austin, Texas and thrived in the well-known musical enclave. Her debut, Last Kids In The Bar was released in 2006 and her sophomore album, Wilson Street, popped up three years later.

Charlie took a novel approach to making her third record. Rather than head out on tour she would actually go live in a town for a month, acquaint herself with the scene, collaborate with local musicians and write a song. 10 cities elicited 10 songs and the result was her 2011 release, Travels With Charlie. Her next effort, You Were Fine, You Weren’t Even Lonely, touched on her break-up with Austin musician, Will Sexton.

Charlie’s sound reflected her love of Blues, Bluegrass and Country, but following her fourth album, she found herself rediscovering early ‘60s music that encompassed the Brill Building, Motown and Girl Groups like the Ronettes, the Shangri-Las Martha Reeves & The Vandellas, the Shirelles and the Supremes. Instead of shoehorning those genres into an acoustic format, she chose to suspend her solo career and form her very own Girl Group.

By this time Charlie had relocated to Los Angeles, but she enlisted two well-respected Austin musicians to make her vision come to fruition, Akina Adderley and Betty Soo. Akina is a Soulful vocalist who fronted her own 10 piece band, Akina Adderley And The Vintage Playboys. She is also descended from Jazz royalty as great- granddaughter of Nat and great niece of Julien Cannonball Adderley. Her incendiary vocal style has won her acclaim from coast to coast. Betty has created considerable buzz as a Folk-flavored singer-songwriter whose music has been described as equal parts sweet and gritty. When Charlie, Akina and Betty’s vocals intertwined, the results were electric.

The trio enlisted producer Dave Way, booking time at his Los Angeles studio, Waystation. A crush of notable musicians, including Eric Holden, Pete Thomas, Dillon O’Brian, Roger Manning, Steve Ellson and Tony Gilkyson pitched in. Their self-titled debut arrived 2016. Fresh, yet familiar, smart and Soulful, the album harkened back to a bygone era without ever feeling kitschy or cloying. It garnered rave reviews and gained them an enthusiastic fan base. Now the ladies have returned with their sophomore effort, The Whole Shebang.

Fifty years ago, the Jackson 5 used the alphabet to elucidate the power of love, Charlie and the Fayettes get numerical on the opening cut, cogently entitled “1-2-3-4.” Tart instrumentation is anchored by a tick-tock rhythm, rippling keys, guitars that echo and sway, plus a smoky harmonica solo. Front and center, the girls lay out the algorithms of attraction; “1-2-3-4, that was all it took, a heartbeat and a look, and I was so gone/Felt my whole world tilting left and right and suddenly a light just came on.”

While the arrangements and instrumentation on “I Don’t Need No Baby” and “Baby, We’ll Be Okay” adhere a Spectorian Wall Of Sound style, both employ lyrics that focus on more au courant concerns. The former is a clear homage to the pluperfect Ronettes hit, “Be My Baby.” From the stuttery drum break and cascading handclaps, to the reverb-drenched guitar, shimmery keys and precision harmonies. Naturally, there’s plenty of glockenspiel. But the lyrics flip the script, rather than asking a guy to be her everything, Charlie and the Fayettes shut down unwanted amorous attention with a few deftly turned phrases; “You may find it hard to understand, right now I’m better off without a man/But how could a girl like me not want a guy like you-get a clue!”

Tethered to a galloping gait, the melody of the latter is accented by swooping strings, Rumble-tastic guitar riffs and whiplash bass lines. Anxious lyrics like “It’s hard not to think about everything going on, I carry a heavy weight so deep in my heart, so I really need you to bring me some light while we’re here in the dark…Sometimes I just need to hear those words, I know the reality is absurd, but I can’t fall asleep ‘til you say, ‘Baby we’ll be okay,” mirror our contemporary angst.

Charlie’s affection for the effervescent Girl Group sound is what motivated her to form her trio, but she still likes to occasionally color outside the lines. On “Stone Cold Fox” and “Tonight’s The Night” she takes a couple of musical detours. “Stone…” is all over the map, wedding Rockabilly guitar and tumbling piano to a rock steady beat. The insouciant vocals echo ‘80s antecedents like Josie Cotton and the Go-Go’s, as playful lyrics celebrate a man who “holds her hand and brings the thunder.” The stinging guitar solo underscores her good fortune.

Initially, “Tonight…” time-travels back to the ‘50s. Lush Doo-Wop inspired vocals trill on the opening verse, but rather quickly, barrelhouse piano, twangy guitars, fluttery organ and a blistering backbeat overtake the arrangement and the song splits the difference between frenzied Jitterbug and Day-glo New Wave.

The best tracks here offer further evidence that the ladies aren’t afraid cross-pollinate styles. “The Cream Rises To The Top” matches a sly tribal backbeat to a slightly tropical “Hukilau” melody. Twitchy, tangled guitar riffs, rock bottom bass lines, airy strings and a wash of Hammond B3 provide ballast. Charlie’s declaration of artistic independence is half (self) pep-talk, half origin story; “Rough and tumble girl she left her home, no one thought she’d make it on her own/With every beat against her she pressed on, ‘cause the cream rises to the top.” Her brash delivery, cushioned by the Fayettes’ cooing Greek chorus, nearly camouflages her inherent diffidence.

Although the title “Night People” pays homage to the Allen Toussaint song of the same name, the two tracks are as different as, um, night and day. Guitars pivot between chicken-scratch riffs and shang-a-lang licks. The sultry arrangement recalls the creamy Philadelphia International Soul sound pioneered by Gamble & Huff in the early ‘70s. The lyrics celebrate nocturnal party people; who are “a groovin’ kind of people, looking fine to go out on the town…curious kind of people, looking for that special spark, night people like to be with people and sometimes there’s a sweetness in the dark.” Syncopated horns and lush strings accent the languid mood.

“Say Those Words” is an urgent declaration of love cloaked in a Rockabilly-Surf-Spy Safari that blends strafing guitar, a rollicking rhythm, roller-rink keys and elastic bass lines. The melody shares some musical DNA with the Chiffons’ Goffin & King classic, “One Fine Day.” Charlie gives her beau some explicit instructions, while haughtily referring to herself in the third person; “Do not take for granted your sweet, loving girl, every day your love must be expressed/Other men may flatter and other men may flirt, so make sure she knows you love her best.” Meanwhile, the Fayettes “shoop-do-wah” their asses off.

Finally, “Riding High” locks into a buttery Southern groove. Warm electric piano licks at the edge of a sweet, Stax-Volt arrangement propelled by peppery horns, shimmery guitar, boomerang bass and a tensile backbeat. Besotted by true love, Charlie admits “people try talking to me, but their words go right through me, head in the clouds, head over heels for you baby/Nothing can get me down now, because of what I’ve found now, my heart and mind are sound now that I got you babe.”

Other interesting tracks include the slippery Sock Hop Slow Jam of “That’s What New Love Is For” and the giddy delight of the title track. The album closes with “You Gotta Give It Up (Party Song),” a hypnotic woke Party anthem for the 21st century. This one opens with one of those lip-smacking “Mwah” kisses that used to close out “The Dating Game.” Walloping drums pound out a tribal tattoo in lock-step with kinetic percussion and insistent handclaps. Walking bass lines patrol the perimeter as spitfire guitar notes detonate like smart bombs. Even as Charlie exhorts the listener to give it up, get down, show it up and shake it all around, she forcefully suggests “We got to wake up, we got to get wise/Don’t be afraid to Speak up, we got to organize.”  One can only hope that Alexandria Ocasio-Cortez works up a dance routine for this song while urging us to register to vote.

This time out, Charlie and the Fayettes were augmented instrumentally by Marcus Watkins and Bill Kirchen on guitars, Chris Joyner on piano and keys. Horn and String arrangements were handled by Steve Ellson and Jim Hoke, respectively. Bill Barrett played harmonica, Steve Hermann was on trumpet, Kristen Weber on violin, Austin Hoke on cello and Mr. Pete Thomas pounded his drum kit with and authority. Again, Eric Holden achieves MVP status by tackling bass, synths, organs, baritone guitar, percussion, mellotron and glockenspiel, (gotta love a man who knows his way around a glockenspiel). He also produced The Whole Shebang.

With this new record Charlie and the Fayettes confirm that their debut wasn’t a fluke. Giving the Girl Group sound a 21st century spin, means wondering less about the Leader Of The Pack and more about the leader of the free world. Having a social conscience and shaking your Groove thing is what these ladies are all about.