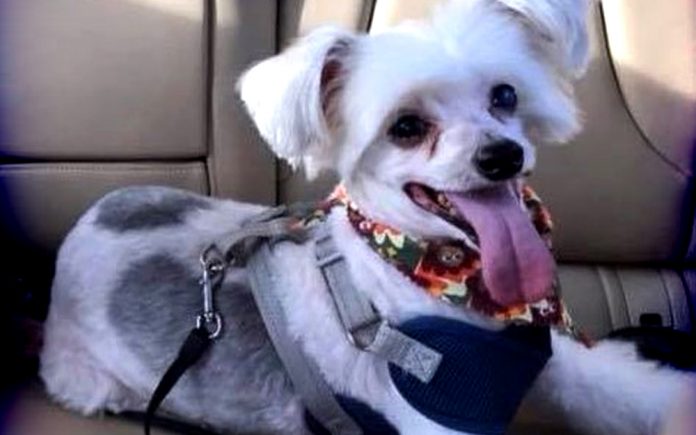 In 2009, my cousin Shannan McAfee Smith and her husband Gary Smith received a phone call from Precious Paws Asian and Small Breed Rescue about a Powder Puff Chinese Crested dog they rescued from a raid on a Tennessee puppy mill.  Ardent dog lovers, the Smiths previously adopted another dog from this organization.  The couple were shocked to learn about the conditions in the puppy mill where small wire crates confined the dogs stacked up four deep on top of each other.  Many of the dogs were in bad physical condition, and sadly there were deceased decomposing dogs in some of the cages.

Most puppy mills are large size commercial breeding facilities characterized by the constant confinement of the animals in small cages, a lack of human contact, no veterinary care, and indiscriminate breeding.  This type of breeding may involve multigeneration breeding of related dogs which produces birth defects and medical problems.  Typically these facilities are in rural areas out of the public eye.

At the time of his rescue, one of Charlie’s legs was caught in the cage bars as he may have struggled during his confinement.  They had to cut the apart cage in order to free him.  His leg was shattered, and the rescue organization provided needed surgery.  Charlie’s leg was saved, but he had a steel rod that remained inside.  His leg never healed sufficiently for him to do certain things such as going down stairs.

The Smiths did not hesitate.  Soon they were on the road making the 5 hour trip from their South Carolina home to foster little one-year-old Charlie.

Shannan recalls, “Charlie rode on my lap during the entire trip home. However, he did not want us to pet him for the first 3 months.  Curiously, he insisted from the beginning on sleeping in between us at night, making sure his body touched both of us.  For a long time he had nightmares, reliving horrible things from his past, crying out while his little legs moved as if he was running.  One night he actually nipped my head while he was still in a deep sleep during a night terror.”

A year later, the rescue group telephoned again to say they located a forever home for Charlie.  Shannan responded, “Charlie already has a forever home!”  She explained, “We were afraid that if Charlie moved, he might lose some of the amazing progress he’d made.  He was interacting well with our other dogs, and learning what it was like to be a dog.  Gary and I saw him through so many changes, and we were totally in love with him.”

Charlie had many milestones, like the time he first happily wagged his tail.  Eventually Charlie discovered toys, and he would greet the Smiths at the door with a different toy every evening.  However, Charlie never permitted belly rubs.  For reasons they could only speculate, he remained protective of his belly and underside.

On August 6, 2018, Shannan and Gary arrived home to discover Charlie lying behind the couch.  One of their other dogs cried out, sounding the alarm that something was seriously wrong.  The couple rushed their beloved little dog to the vet, only to have him pass away in their arms the moment they entered the clinic.  Their vet speculated that 10-year-old Charlie may have suffered a stroke or heart attack.

Charlie’s legacy will be to influence more people to give a rescue dog a second chance.  Adopters of these special pups will be rewarded in ways they never anticipated.  Shannan advises, “Don’t ever give up on a dog that has issues.  With love and patience, Charlie was able to live the life of a normal joyful dog.  He loved being around the other dogs, and they taught him so much.  Charlie touched our hearts in a special way, and we were happy to give him a great life.” 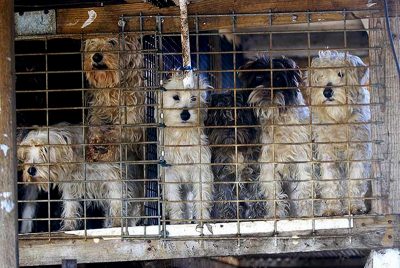 Fast forward to 2020 with the pandemic.  More folks feeling isolated went online and adopted dogs from puppy mills after seeing cute photos of puppies on websites.  Many of them purchased sick puppies for thousands of dollars only to incur large veterinary bills.  Some heartbroken children went through the trauma of having their new adorable puppy pass away.  Not surprisingly, no one returned their frantic phone calls.   Operators of puppy mills or back yard breeders are not about to refund your adoption fee, nor will they inform you of known medical issues. It’s all about maximizing profit.

Educate your friends and family about the consequences when they buy a puppy from a pet store, over the Internet, or from a backyard breeder where they never see the facility.   These “factory farms” may confine hundreds of animals in deplorable conditions, suffering in extreme weather, never feeling the soft grass beneath their feet, and never receiving a loving touch. Federal oversight through the Food and Drug Administration is short staffed and the laws not strict enough.  It’s up to us to stop the demand for these dogs.  Think about the joy Charlie gave his humans, and visit a shelter or rescue group when you seek a new dog.

Coachella Valley residents can contact Loving All Animals at www.lovingallanimals.org or (760) 834-7000.  To find a wonderful local rescue dog of any breed, check www.petfinder.com and put in your zip code.  One special local rescue, Fluffs and Scruffs, specializes in hypoallergenic designer type dogs.  Check out their available pets at www.fluffsandscruffsdogrescue.org and call them at (310) 980-3383.  ADOPT DON’T SHOP!