Some people are just born to do what they do. Chase Huna is one of those people. From his smooth, low key, cool demeanor to the sultry sax sounds that he emits, you can tell this talented 15 year old redhead is the real deal.

At age 2 without any prompting from his parents he started grooving to smooth jazz on the radio. His parents Tom and Lee Ann noticed this and at age 7 started taking him to smooth jazz concerts. That’s where he discovered the sax and at age 10 his parents bought him one for Christmas. This started Chase on his musical journey and he took private lessons for 2 & 1/2 years.

Then about a year later, magic hit his life and career when the desert’s favorite sax player Will Donato decided to mentor him. Suddenly Chase was playing with Art of Sax and playing at jazz venues like Spaghettinis. It was at this point that his career began to take off!

In the last couple of years he’s played with the greats of smooth jazz including Peter White, Michael Paulo, Mindi Abair, and a host of others. He’s opened for (with Will Donato) for some of the biggest jazz events and was onstage at the KSBR Bash last year with a slew of the biggest of the big names.

He won a $2,500 award last year in the music competition put on by the Rancho Mirage Women’s Club. He even performed at the Lincoln Center in New York with his high school jazz band.

Chase is not content to rest on his laurels, so this year he teamed with Smooth jazz superstar Steve Oliver to put out a new CD. The two are collaborating on a total of 10 songs and the new CD is expected to debut at the end of this year. He’s already released his first single “On the Chase” and it debuted on the Groove Jazz Charts at #29. That’s a lot of success for a 15 year old! 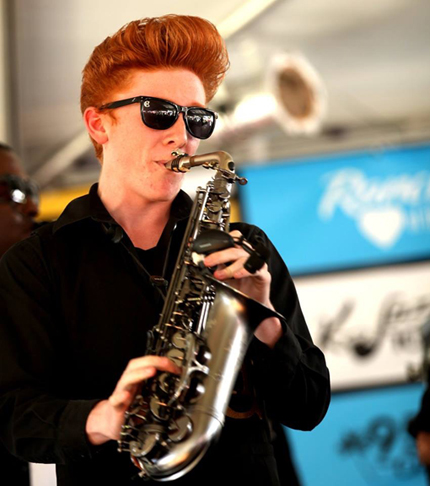 Chase handles it with an easy going, humble attitude and that is another thing that makes him so popular. No arrogance there.

Chase’s successes continue to grow. He just had his own Spaghettini date with a sellout! He also just appeared at the Newport Beach Jazz Festivals with headliners Mindi Abair, Peter White and Norman Brown. He just finished up performing at the San Diego Jazz Festival with headliners Maxwell, Erika Badu and Jazz in Pink.

His goal is to do this forever. He loves the travel and his great Dad Tom takes him everywhere. His parents support him on all that he does. What a wonderful example of what it really takes to raise great kids!

I asked him what message he’d like to give to his fans. He said “I hope people enjoy what I do and hope to see them at a show.”