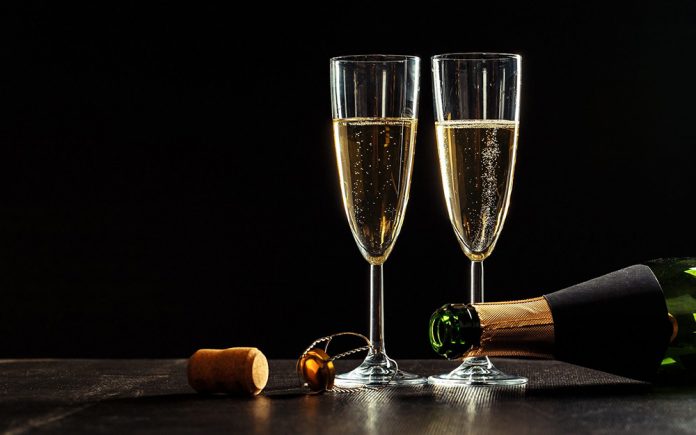 Greetings & Salutations! We wound down our column “last year” (2020 could we forget!) with a reporting on celebratory sparkling wines for the holidays. And just because we’re now on this side of the new year, I see no reason to cease and desist from enjoying even more bubbly. It’s fresh, lively and fun—all of which is what we can use in large doses.

Three weeks ago, we set our imaginations high as we enthralled our minds living the lush life frothing it up with French Champagne. This time, we’re coming back down to earth as we discuss one of the most reasonably priced sparklers on the market. We’ll call it “cheap bubbly” only in the sense that it is inexpensive; no one reading this column is interested in cheap tasting stuff when there’s so much better around.

And the winner of the season’s best tasting bubbly for the “best” price is Alma Brut White Sparkling Wine. At $4.99 a bottle, and all the way from Brazil, it can’t be beat. “This refreshing Sparkling wine is bursting with flavors of green apple and citrus intermingled with aromas of toasted bread. Light-bodied and dry, this wine would be a great addition for any occasion!” That was the selling spiel from Total Wines over the holidays. And even though I think Total Wines often puffs up their “Winery Direct” stuff, I agree with them on the Alma Brut—which is made from a tasty blend of (dry) Moscato and Trebbiano. So how can you farm a vineyard, produce a very good sparkler, bottle it, and send it over from Brazil at less than five bucks?

Well generally, that’s the wonderful state of affairs to look forward to whilst playing the 2021 game of wine. The new school of young winemakers learning well and appreciating history is such a breath of fresh air! It’s the international gustatory fun & games as we look to the world for decent camaraderie.

There are still a lot of folks out there that have not recognized Brazil as a major wine producing country. But Brazil is the fifth largest producer of wine in the Southern Hemisphere. And if you’re doing the geography/math thing—here’s a huge clue: Brazil produces more wine than New Zealand!

For certain the “new” wine trade in Brazil has wonderfully regenerated itself in the past 20 years, but remember, colonized by the Portuguese, the first vines introduced to Brazil was back in 1532. With the arrival of Italian immigrants in the late 1800s, it was realized that the south of Brazil was ideal for grape growing. Many Italian, French and Spanish varietals were planted and experimented with tasty results. Sparkling wines utilizing Italian varietals such as Moscato and Trebbiano were up and coming.

And—of course, I have a story to tell: Right around 1985 or so, I came across a case of Brazilian Cabernet Sauvignon that was being sold by the “new” Trader Joe’s Market just opened in Costa Mesa California. I remember the price being ridiculously low; the new manager couldn’t even sell one bottle, so he sold cases off on the penny just to make space.

I tried it out and thought it a decent quaff—even at its original price at $12 a bottle, and it was a bargain and a half at the reduced price. I was so impressed by it that I took it over to a new acquaintance of mine, a master craftsman, and wine lover, living in Laguna Beach, who was just celebrating retirement from years of teaching woodwork arts at Fullerton Junior College.

I had just found out that he and his wife had purchased a vineyard up in Sonoma County, up in hills above Guerneville. I surely wished to impress him with my wine acumen (as in, “Hey Rick why don’t you come up and stay at our vineyard property) and he actually took the time from his party to sit and consider the Brazilian Cab.

He did appreciate the wine and, later, did indeed invite me over to check out his new surrounds up in Sonoma. And here’s the funny thing: his new four-acre vineyard was planted with Pinot Noir. (As we know, Pinot Noir from the Russian River AVA is the ticket!). However, my friend was told by many of his neighbors to pull out the mature Pinot and re-plant with the “new kid in town”—Merlot. He did and his dreams of producing a wine were put back five years. But he had a beautiful spot and a beautiful house.

He also had a beautiful woodworking shed and he had imported a master Danish wood carving machine for him to continue in the arts. Sometime thereafter, we heard that he had sliced off all his fingers in his operative hand. Such a terrible thing to hear. He had them sewn back and went through months of therapy. And when I had gone back up to visited him, one of the first things he asked about was whether I had anymore Brazilian Cab with me!

As things go, we lost track of each other through the ensuing years. However, while I was vacationing in the mountains of Eastern Arizona years later, I ran into a helicopter first responder who lived in Sonoma and was on vacation himself. He told me that he recently flew a man, a vintner, to the emergency room—that the patient had just sliced off his fingers on a woodworking machine, and, that same patient admitted to slicing those same fingers previously! Upon hearing that horrific story, I sent my old friend a case of Brazilian Cab. He was immensely grateful!

Well—I really got off the beaten path—so to speak, but I guess the lesson here is that no matter what predicament you find yourself in, a good memorable wine surely helps out the day. And we’ll talk more about the brave new world of Brazilian wine in up-coming articles. Cheers!