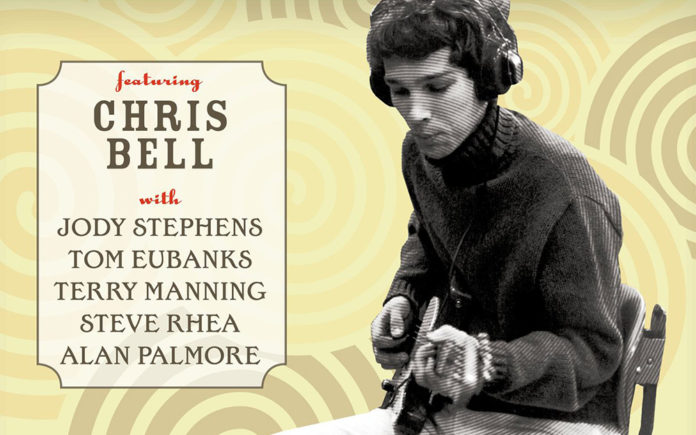 It looks like 2017 is shaping up to become the year that the world discovers Chris Bell. In November, a long overdue oral-history/biography, There Was A Light: The Cosmic History Of Big Star Founder Chris Bell, arrives. In August, a deluxe treatment of I Am The Cosmos, his only solo album, is being re-issued. But first up is Looking Forward, a collection of pre-Big Star music.

The story of the band Big Star is one of missed opportunities and bad luck. The Memphis four-piece should have been as big as the Beatles, (ok, at least the Raspberries), but their 1972 debut, “#1 Record” was virtually ignored by radio and the music industry. Music critics and discerning fans understood, and even though the band only released two more poorly distributed LPs, (that quickly went out of print), the legend grew.

Getting turned on to Big Star became a rite of passage for record store clerks and music geeks alike. By the ‘80s bands like the Bangles, R.E.M. and Replacements were either covering, name-checking or paying homage to the band that Chris Bell, Alex Chilton, Andy Hummel and Jody Stephens formed in 1971. Their story rather elegantly unfolds in the 2012 documentary, Big Star: Nothing Can Hurt Me.

But Looking Forward presages that genius era. To paraphrase Maria Von Trapp and the Sound Of Music, it starts at the very beginning, and that’s a very fine place to start. Christopher Branford Bell was born in Memphis, Tennessee in January, 1951. His British mother, Joan, met his dad Vernon, in England when he was part of a B-17 Bomber crew during World War II. The couple settled in his native Memphis following the war.

Chris was the fifth of six siblings, one brother and four sisters. As his family grew, Vernon opened a string of cafes and restaurants in quick succession. Chris grew up in an upper-middle class section of town. As a kid, he was an avid comic book collector.

Although Memphis is the cradle of Rock, Roll, Rhythm & Blues, music didn’t really interest him until the Beatles exploded on the scene, after that he became obsessed. He quickly mastered the guitar and formed his first band, the Jynx, (the name was a sly homage to British Invasion stalwarts, the Kinks), in junior high.

It was in high school that Chris first crossed paths with Alex Chilton, who at age 15 wound up fronting the Box Tops. Their immediate success gave Alex license to skip school and criss-cross the country touring with the Beach Boys. In high school Chris formed Christmas Future with drummer Steve Rhea.

Chris’ talents were prodigious. As a guitarist, his style was clean and precise; he could switch from rhythm guitar to lead with ease. His songwriting skills were evolving exponentially; he was also a quick study in the recording studio. His youthful acumen did not go unnoticed by producer John Fry. Something of a wunderkind himself, John had begun recording music in junior high. A few years later he opened his own facility, Ardent Recording Studios in Memphis. John entrusted Chris, and other well-chosen acolytes with keys to the studio, allowing them unfettered, after-hours access.

The album opens tentatively with a Rock City cut, “I Think It’s Time To Say Goodbye.” Scratchy guitar riffs slowly drift out of the speakers and are quickly eclipsed by a chunky backbeat, rumbling bass lines and electric power chords that shapeshift from phased to bendy. Although the lyrics are a study in equivocation, the straight ahead arrangement and instrumentation fall right in line with Blue Cheer’s version of “Summertime Blues” and the Creation’s “Makin’ Time.”

Rock City’s initial inspiration came from the British Invasion, but they pushed past those shagadelic parameters and incorporated myriad styles. Initially “I Lost A Love” feels like a lachrymose study in sadness, each verse is powered by plangent acoustic guitar, but everything amps up on the chorus, changing the tone to gritty and defiant, even as the words attempt a soothing reconciliation.

Even more ambitious is “The Answer.” The quiescent intro blends pastoral acoustics with spacey synths. Vaguely philosophical lyrics like “Look with me for the answer, climb the walls of your mind/Look with me for the answer, for understanding mankind,” are delivered with portent. Suddenly thunderstruck guitar kicks in over a hulking backbeat. The result is an unlikely fusion of primitive Garage Rock and the intricate sophistication of Prog Rock.

Both “Introduction” and “Sunday Organ” highlight the band’s instrumental prowess. The former is knotty and complex, the latter soulful and ecumenical. Meanwhile, “Lovely Lady” is a jangly precursor to Big Star’s brand of effortless Power Pop. Pitching woo ‘60s style involves neatly turned phrases like “there are no words that could describe the poetry of you” Here, flowing harmonies crest over chiming electric guitar, ringing rhythm riffs and shaker percussion.

The final pair of complete Rock City tracks hint at vague Rock Opera aspirations. “The Preacher” is fueled by shifting time signatures, lush organ colors, fuzzy, stuttery guitar and ticklish handclaps. The mood feels apocalyptic as the lyrics paint a portrait of a man of the cloth who “speaks so eloquently.” A soothing piano outro feels deceptively contemplative, until careening electric guitars crash the party.

In contrast, “Shine On Me” is positively sunshiny. Splashes of mellotron cascade over a crackling beat, meandering through layers of acoustic and electric guitar, plus some lonesome pedal steel. The lyrics are surprisingly theistic; “We’ve all sinned in many ways, we all have our cross to bear/We’ll be on our own come judgement day, hopin’ that the Lord still cares.”

When Rock City ceased to exist, Chris briefly played guitar with vocalist Alan Palmore, Terry Manning on keys and bass and ex-Christmas Future drummer Steve Rhea as the Wallabys. They are represented here with two tracks, “Feeling High” and “The Reason.”

The former is a jaunty and slightly verbose slice of British Invasion Pop. The melody is a sharp pastiche of Kinks, Zombies and of course, the Fab Four. The tune is anchored by rippling bass lines, pummeling drums and propulsive guitars. The lyrics send the listener down the rabbit hole, sketching a scenario that is “a dream different from reality.” that promises “roller-coasters in the sky and children on the clouds going by.”

The latter blends treacly vocals, lush mellotron, a shuffle rhythm and feathery acoustic filigrees. A romantic post-partum, the lyrics feel clingy and emotionally cloying. No wonder this guy got dumped.

The Wallabys gave way to Icewater. This time out the band included Steve Rhea on drums and guitar and Terry Manning on keys plus backing vocals. Future Big Star bassist Andy Hummel was added to the line-up, and when Steve started college, Jody Stephens pitched in on drums.

For Rock City and the Wallabys, Chris was willing to cede most of the spotlight, first to Tom Eubanks and later Alan Palmore, rarely taking the lead on vocals or guitar. Clearly, with Icewater he had more to say. “All I See Is You” offers a hint of the melancholy sunshine he fully mastered with Big Star. The crushing sadness of a broken relationship is leavened by the baroque instrumentation. Shimmery mellotron connects with tensile bass lines, a dropped rhythm and bare bones guitar. Apropos of nothing, he offers this prescient couplet, “It won’t be long before I’m gone, someone somewhere (will) say it’s time to go, won’t you please come home.” 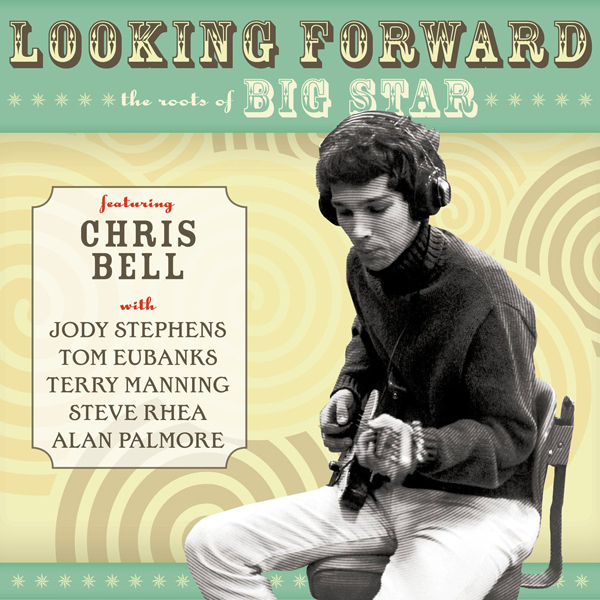 “Looking Forward,” the track that gives this collection its name, is a perfect illustration of Chris’ studio acumen. The lyrics feel a bit unfinished; “when I’m walking down the street, I am thinking of your feet,” um, ok. But the arrangement and instrumentation is surprisingly Bluesy. Trippy loop effects collide with shards of guitar slithery bass and rock steady beat.

“A Chance To Live” is a complete anomaly, not only do the lead vocals belong to someone named Jimbo Robinson, but the songwriter is listed as “unknown.” A chugging psychedelic rocker, the track sounds like the bastard child of Dylan’s “Subterranean Homesick Blues” and the Amboy Dukes’ “Journey To The Center Of Your Mind.” It also features hilariously detailed lyrics regarding a wealthy milquetoast “who’s gonna die before he gets to live.” Until then he discovers the salubrious properties of cannabis! …the tune kind of collapses in on itself, but it’s fun while it lasts.

Of course, the best tracks here are nascent interpretations of Big Star standards. Polished versions of “My Life Is Right” and “Try Again” appeared on “#1 Record,” Rock City takes a pass at both. The band manages to dirty up the pretty on “My Life…” creating a sturdier template for the delicate piano ballad.

“Try…,” which is credited to Chris and Alex Chilton is equal parts spare and gorgeous, featuring only Chris’ yearning vocals, layered acoustic guitars and wistful pedal steel. Another sweet surprise is the “Psychedelic Stuff” a goofy hodgepodge of backwards guitar, a galumphing backbeat and echo-y keys.

Big Star completists are sure to rejoice over the album’s final four songs. They include alternate backing tracks for “All I See Is You” and “Feeling High,” plus the Icewater obscurity “Germany.” Also, an early version, sans vocals, of the Big Star classic, “O My Soul” features “(possible) guitars” from Alex Chilton.

When commercial success eluded Big Star, Chris Bell took it personally, quitting the band midway through sessions for their second, equally sublime effort, Radio City. For several years he abandoned music entirely. But an extended stay in Europe with his older brother David, rekindled his passion and he began to piece together a solo album, I Am The Cosmos. He returned to the states in 1978, taking a job running one of his father’s restaurants, as he prepared to launch his a solo career. Sadly, two days after Christmas he lost control of his Triumph sports car, wrapping it around a light pole. He was killed instantly at the tender age of 27.

Looking Forward is a comprehensive view of Chris Bell’s formative years. Perhaps the world is finally ready to pay attention.