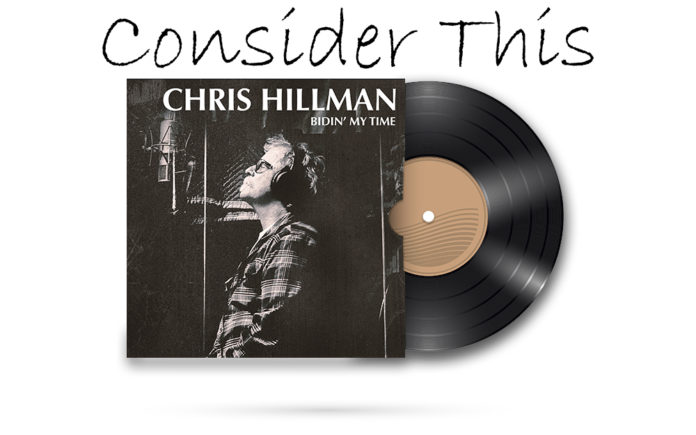 Back in the early ‘60s, Rock N’ Roll bands popped up in towns big and small all across the U.S.A., motivated by the thrilling sounds coming from British Invasion groups like the Beatles and Rolling Stones, kids picked up guitars and plugged into amps. They honed their chops in garages and rec rooms, hoping for a shot at Rock N’ Roll stardom.  Chris Hillman achieved that goal with not one, but two seminal bands.

Born in 1944, Chris grew up in San Diego, the third of four kids. When his older sister returned from college with a clutch of Folk records, it ignited his interest in music. His mother encouraged him, buying him his first guitar. He quickly gravitated toward Bluegrass music and mastered the mandolin. By age 15 he was travelling to nearby Los Angeles to see heroes like the Kentucky Colonels play at venerated venues like the Ash Grove.

Pretty soon he was invited to join his first Bluegrass ensemble, the Scottsville Squirrel Barkers (other members later ended up in well-known bands like the Country Gazette, Hearts & Flowers and the Eagles). At age 19 he hooked up with the Golden State Boys, featuring brothers Vern and Rex Gosdin, not long after, the band became the Hillmen. Although he was still underage, Chris procured a fake ID, enabling him to play bars and Honky Tonks throughout southern California.

At the same time that Chris contemplated abandoning music and enrolling at UCLA, a local group called the Beefeaters was working on a way to blend Dylan-esque Folk with British Invasion Rock N’ Roll. Roger (ne’ Jim) McGuinn, Gene Clark and David Crosby started as a trio and signed up with manager/producer Jim Dickinson. Coincidently, he had also been involved with the Hillmen, and Jim suggested they recruit Chris for bass duties. The line-up was made complete with the addition of drummer Michael Clarke and the Beefeaters became the Byrds.

The band quickly gained attention playing the Rock clubs that populated the Sunset Strip. Signed to Columbia records in 1965, their Sound was buoyed by an ethereal vocal blend and Roger McGuinn’s ringing, 12-string Rickenbacker guitar. They first hit with a jangly version of Bob Dylan’s “Mr. Tambourine Man,” and for a few years the hits kept coming. Songs like “Turn! Turn! Turn!,” “Eight

Miles High,” and “So You Want To Be A Rock n’ Roll Star” incorporated myriad styles ranging Folk Rock to Psychedelia to hints of Jazz and Raga inspired by John Coltrane and Ravi Shankar.

But the band was bursting at the seams with, um, contrasting personalities. Gene Clark quit the band, David Crosby also quit (or was fired, depending on who you ask). Later Michael Clarke followed suit. Roger and Chris soldiered on by drafting Georgia/Florida/Harvard transplant Gram Parsons.

Gram Parsons had been kicking around L.A. for a few years, on a mission to inject his Country Western influences into Rock N’ Roll. Chris saw Gram’s vision as a way to incorporate his first musical love, Bluegrass, Roger was ready for a new direction. So the trio recorded the Byrds’ sixth album, Sweetheart Of The Rodeo. Naturally, a power struggle between Roger and Gram ensued, motivating the latter to quit. Chris threw in his lot with Gram and the pair formed the Flying Burrito Brothers.

The four-piece included Chris Etheridge on bass and “Sneaky” Pete Kleinow on pedal steel. Although they were never a massive commercial success, they, (along with former teen idol Rick Nelson and reluctant Monkee, Mike Nesmith), pretty much invented a new musical genre. The Burritos pioneered the Country-Rock hybrid that Gram characterized as Cosmic American Music and has since been referred to as alt.country and Americana. That sound was co-opted and popularized by the Eagles, Poco and Firefall in the ‘70s, then again toward the end of the 20th century with Uncle Tupelo, Jayhawks and Ryan Adams.

Following the Burritos’ dissolution in the early ‘70s, Chris spent the remainder of the “Me Decade” toggling between semi-Super groups like Stephen Stills’ Manassas, the Souther-Hillman-Furay Band which featured singer-songwriter J.D. Souther and Buffalo Springfield founder Richie Furay. Next up he reunited with his Byrd compadres Roger McGuinn and Gene Clark as (wait for it…) McGuinn-Hillman-Clark. Within that time frame he also released two well-received solo albums, Slippin’ Away in 1976 and Clear Sailin’ the following year.

Ironically, their Country-Rock hybrid was a huge success on the Country Charts, and was fully embraced by Country radio stations. Over the course of nine years and five albums, they consistently placed in the Top 25, with many singles hitting #1. It was slightly bittersweet for Chris. The sound he helped forge with Gram finally broke through, but they couldn’t savor the accomplishment together. (Gram having famously died following a drug overdose in Joshua Tree back in 1973).

In between mini Byrds and Desert Rose reunions, he recorded a series of duo records with Herb Pederson, but Chris’ solo output has been sporadic. 1998 saw the release of Like A Hurricane and seven years later The Other Side appeared. Now after a 12 year absence he has returned with Bidin’ My Time.

Although Chris has picked, played and sung on over 40 records, he has never been that prolific a songwriter. So it’s nice to report that he has co-written six of the tracks here. The title track offers a master class in Cosmic Americana. Sly pedal steel lattices over sparkly mandolin, 12-string acoustic and electric guitars, a brushed back-beat and stately piano notes. The lyrics pay homage to old friends, some here and some long gone, as he confides “I’m just biding my time, there’s dust on my saddle and clouds in my mind/I’m just biding my time, ‘til I leave this old city behind.”

“Such Is The World We Live In” hits that back-porch Bluegrass sweet spot. The instrumentation and arrangement blends rippling mandolin, rock-steady upright bass and spitfire fiddle. The sprightly tune nearly camouflages lyrics that veer toward thinly veiled jingoism, as he wonders what his great grandfather might make of the 21st century; “I never thought the day would come when I’d see America on the run, and not sure what they’re running from/And all that’s lost in our schools when the godless ones attempt to rule, we can only wonder who’s the fool.”

“Different Rivers” is lyrically less divisive. An easy-going encomium to his children, it unspools slowly. The pensive melody is powered by twinkly piano fills and overlapping acoustic arpeggios. Meanwhile, “Given All I Can See” is equally beautiful. Sun-dappled acoustic guitars repeat a buoyant refrain over a chugging back-beat. Vaguely spiritual lyrics “seek the mercy and the grace” and smoky harmonica fills add some zip to the instrumental break.

“Here She Comes Again” was originally written with Byrd-mate Roger McGuinn 40 years ago, but remained unrecorded. It jangles like a long-lost Byrds track. The arrangement centers on Roger’s incandescent 12-string Rickenbacker lapping against swirly organ colors and a slapdash rhythm. It manages the neat trick of feeling fresh and familiar at the same Time.

Finally, “Restless” is a courtly Country Waltz offering this confession/epiphany; “I’m restless, just like any other man.” Swooping lead guitar, high lonesome pedal steel and Honky-Tonk piano underscore lyrics that reconcile youthful wanderlust with late life gravitas; “I’ve been blessed with a good life, given more than I deserve, did I really make a difference, have I lived every word/Of the pages that rustle, every line and every curve, keeps me restless until I find the right word.”

The album is peppered with a few familiar favorites. Chris serves up a crisp version of the Everly Brothers’ “Walk Right Back.” Along with “Bells Of Rhymney” he revisits two more Byrds classics. “Old John Robertson” gets a subtle facelift, re-emerging as “New Old John Robertson.” The propulsive rustic charmer has been recast as a banjo-riffic Bluegrass breakdown replete with revised lyrics that burnish the legend of John Robertson, A Hollywood actor who retired to Chris’ San Diegan hometown, Rancho Santa Fe, back in the ‘50s.

“She Don’t Care About Time” was originally written and sung by late Byrd Gene Clark. Chris’ version doesn’t stray far from the original, as it includes a chiming 12-string solo that approximates Roger McGuinn’s purloined riffs from the Bach cantata, “Jesu, Joy Of Man’s Desiring.”

The album closes with a tender version of Tom Petty’s “Wildflowers.” Here, the original’s sprightly Country-flavora is supplanted by a Bluegrass bounce accented by fluttery mandolin and lively interplay between piano and fiddle. It serves as something of an elegy to the recently deceased Rock N’ Roll everyman/superstar who served as the producer for this album.

A huge Byrds fanatic, Tom Petty based a lot of his sound on the quintet’s revolutionary Folk-Rock amalgam. Friends with Chris for what seems like forever, he was the natural choice to shepherd this record. His Heartbreakers, drummer Steve Ferrone, guitarist Mike Campbell and keyboard savant Benmont Tench pitched in. They were reinforced by Desert Rose pals Herb Pederson and John Jorgenson, Jay Dee Maness, plus bassist Mark Fain, guitarist Josh Jove, and fiddler Gabe Witcher.

In addition to producing, Tom Petty added electric guitar and harmonica. Sadly, shockingly, TP died ten days after the album’s release, adding a patina of poignancy to the listening experience. Ultimately, Bidin’ My Time is a beautiful record that references the past and still manages to look toward the future.