Chances are your first encounter with Chris was in 1991 on MTV. There he was, in an arty black & white video; bravely, holding back the tears on a beach, clinging tightly to a topless supermodel, lamenting her wicked ways.

Why is this oh-so-handsome man so sad, you thought? And…wait a minute, is he yodeling? Isaak seemed to burst on the scene that year, but he had already been making records for six years.

Chris Isaak arrived in the world in 1956, the year after Elvis Presley was anointed the King Of Rock & Roll, the same year Roy Orbison and Jerry Lee Lewis each signed their first contracts with Sun Records, and the year before Rick Nelson released his first hit single.

Born and raised in Stockton, California, he was a bit of an over-achiever. Borrowing his brother’s guitar, he taught himself to play and started writing songs. Class president every year of high school, he was also the valedictorian.

Isaak attended a nearby community college before transferring to University Of The Pacific. Spending a year abroad studying in Japan only cemented his interest in Asian culture.  He even trained as a boxer, fighting in the Heavyweight division.

Growing up, he had always gravitated to his parents’ record collection, quietly eschewing the Metal, Disco, Punk and Funk his peers were delving into. He received equal inspiration from ‘50s Rockabilly, Dean Martin, Frankie Laine, Hawaiian music, and even Robert Mitchum’s Calypso records. He haunted pawn shops and second-hand stores searching for the classic vinyl.

After graduating from college (with a bachelor’s degree in English and Communications Arts), he decided to form a band. He recruited ex-Avengers guitarist, James Calvin Wilsey, bassist Rowland Salley and powerhouse drummer Kenny Dale Johnson. The band was christened Silvertone and began making a name for themselves playing clubs in the Bay area that brought them to the attention of producer Erik Jacobson.

Erik Jacobson began his music career in a band with one of the most extravagant monikers in Psychedelic Rock: Knob Lick Upper 10,000, (please re-unite and tour!) Once they broke up, he ended up behind the boards, producing hit albums for the Lovin’ Spoonful, Tim Hardin, Sopwith Camel and Norman Greenbaum.

Jacobson was an industry veteran when he began managing Chris Isaak, and that opened a lot of doors. By 1984 the band was signed to Warner Brothers. Isaak’s debut was named for his backing band, Silvertone. When it was released in January, 1985, it was the complete antithesis of the music being played on the radio and MTV.

Pop Music was entering a crap-tastic phase that guaranteed the popularity of Wham!, Miami Sound Machine, Foreigner and REO Speedwagon. Isaak’s music was dark and brooding, featuring Wilsey’s reverb-drenched guitar along with Johnson and Salley’s deft time-keeping. Isaak’s voice was something else, hitting the sweet spot between Orbison’s velvet-y croon and Rick Nelson’s Rockabilly sneer.

His looks didn’t hurt either, Isaak redefined the term “rugged” with his $8 pompadour, busted boxer’s nose and surfer’s physique. The album received rave reviews from critics and praise from heroes like John Fogerty. Two singles, “Dancin’” and “Gone Ridin’” received modest airplay on MTV and his fan base slowly grew.

Two years later Isaak recorded his self-titled, sophomore effort. It included lonely laments like “Blue Hotel” and “You Owe Me Some Kind Of Lovin’” along with a trenchant cover of the Yardbirds’ “Heart Full Of Soul.”  Again he was cheered by critics and virtually ignored by consumers.

Ironically, the movie industry was giving him his biggest exposure. Director David Lynch featured two Isaak songs in his cracked cult phenomenon, “Blue Velvet.” Director Jonathan Demme took it one step further, giving Isaak a cameo, (as a hit-man disguised as a clown) in his film “Married To The Mob.”  Even as movie-stardom beckoned, Isaak returned to the studio to record his third album.

All of Isaak’s influences coalesced on Heart Shaped World.  Shimmery and atmospheric, it was equal parts torch and twang. Moody ballads like “Wicked Game” and “Blue Spanish Sky” were offset by rollicking rave-ups like “I’m Not Waiting” and “Forever Young.” Once again, critics rejoiced and the general public remained blissfully ignorant.

Although his label was frustrated, Isaak was delighted with his small, but loyal, fan base. His live shows during this period were incredibly high energy and funny. Along with his many gifts, Chris Isaak has a wicked sense of humor.

Playing clubs like the Coach House, the Roxy and the Palomino, Isaak would invariably invite dancing girls on stage toward the end of his set. (In fact the old Bitch Goddess that writes this column spent many nights on stage with Chris Isaak in her young and nubile Bitch Goddess days. So much so, that he would alternately introduce her as his “talented assistant Margo” or “Dance Machine”).

In late 1990 David Lynch included the song “Wicked Game” in a pivotal scene of his movie “Wild At Heart.” A disc jockey in Atlanta was so enamored with the track he played it constantly. Suddenly it was moving up the charts. The aforementioned video, shot by photographer Herb Ritts went into heavy rotation on MTV and the album rocketed into the Top 10. Six years into his career Chris Isaak was being touted as the “next big thing.”

Isaak spent the next few years on the road, his label insisted he capitalize on his newly raised profile. So it was four years before his fourth album, San Francisco Days, was released. That album found him expanding his horizons adding keyboards and sax to the mix.

Throughout the ‘90s, more albums and tours followed. Forever Blue, released in 1995 was the ne plus ultra of heartbreak. 1996’s Baja Sessions was a casual acoustic hang that re-worked older Isaak originals and gave him free reign to interpret favorite songs from Marty Robbins, Dean Martin and Gene Autry. (It also introduced new guitarist, Hershel Yatovitz, who replaced the departed James Calvin Wilsey). The sly Speak Of The Devil album arrived in 1998.

From 2001 to 2004, Isaak and his band-mates starred in the Showtime comedy series “The Chris Isaak Show.” A hysterically funny fictionalized version of Isaak’s life, it featured musical performances

from Isaak and Silvertone, as well as collaborations with musicians like Stevie Nicks and Shawn Colvin. It was the perfect showcase for his offbeat humor and magnetic charm. His Always Got Tonight album served as a companion piece, of sorts, to the series.

A Christmas album arrived in 2004, but it was another five years before he went into the studio for the less than stellar Mr. Lucky album. Finally in 2011 he retreated to the infamous Sun Studio in Memphis to pay homage to lifelong idols like Elvis Presley, Roy Orbison, Carl Perkins, Jerry Lee Lewis and Johnny Cash. He reasoned it was late enough in his career to re-interpret these classics without looking as though he was riding on their coat-tails. 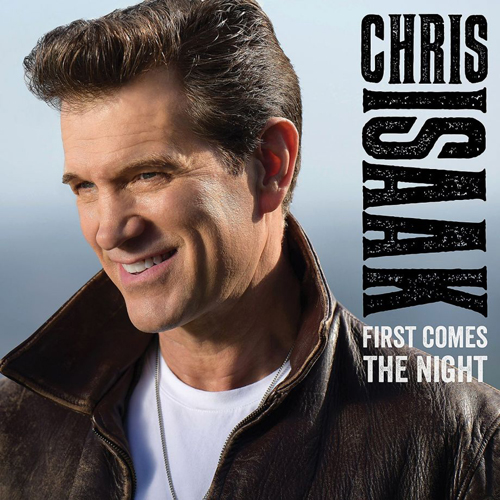 Now Isaak is back with his 12th studio album, and it opens with the title track, “First Comes The Night.”  Strummy guitar and a Hammond B3 wash accent this high lonesome heartache. Over a loping rhythm he tries to talk himself through the pain…“it ain’t always going to be this way.”

Of course Chris Isaak has written the book on moody, broody break up records, (what, you were expecting some auto-tuned EDM?)  Obviously this album continues that tradition; it is steeped in heart break. But Isaak gives the listener several shades and permutations of these emotions.

“Please Don’t Call” is an up-tempo rocker that blends Isaak’s sultry vocals  with slap-back bass, plus a scorching guitar solo that careens through the mix. Following a divisive break-up his tone shifts from genial good guy, becoming dismissive and defiant.  “I don’t want your sympathy, I don’t care what’s wrong with me/I don’t need you to believe, so I’m leaving.”

Meanwhile, “Kiss Me Like A Stranger” is a Surf/Spy Tango combo platter. Isaak’s stentorian vocals are underscored by reverb-drenched riffs, languid strings and brushed percussion.  If Ricky Ricardo and Dick Dale ever collaborated on a song this might be the result.

The best tracks here spotlight the crisp musicianship of Silvertone. Isaak’s economical songwriting consistently plays to their strengths. “Dry Your Eyes” is powered by Salley’s walking bass lines, Johnson’s whipcrack rhythms and Yatovitz’s guitar hero pyrotechnics. His first solo is tensile and compact, but the second one positively shreds.

“Running Down The Road” is anchored by barrelhouse piano runs from Scott Plunkett and a duck-walking solo from Yatovitz. The melody is classic roadhouse boogie-woogie, the lyrics paint Isaak as an emotional fugitive, running from his wicked ways.

“Don’t Break My Heart” fuses a walloping backbeat to   “everybody skate backwards” organ fills and roiling bass lines. Isaak’s mien is sly and playful as he convinces an ex to give him one more shot. Here Yatovitz guitar engages in a tart call-and response over Isaak’s flirty seduction.

Isaak amps up the “kitsch” factor on both on “Reverie” and “Baby What You Want Me To Do.”  For “Reverie” his vocals are croon-y and urgent over plinking piano, swooping strings and shadowy guitar. The “reverie” in question seems to be a euphemism for a lover’s post-coital distance. (Wait, who needs to fake that for Chris Isaak?)

Although the latter shares a title with Jimmy Reed’s   classic, it’s the complete antithesis of that swampy Blues shuffle.  The track is a smorgasbord of Isaak touchstones; the intro recalls Frankie Laine and the Italianate corn of “Volare,” tethered to a clip-clop Gene Autry rhythm. Harpsichord, strings and Surf Guitar are layered into the mix. Just as it seems to be collapsing into itself, Isaak’s sardonic humor shines through.

That drollery is front and center on “Down In Flames” and “Insects” The former is a propulsive rave-up that sports a pounding backbeat, doo-wop-y Greek chorus and scorching guitar licks. Here he ponders his own mortality, offering acerbic accounts of more famous deaths. “James Dean bought it on the highway, Marilyn found it in a pill/Elvis died-or did he-they’re looking for him still/Some go out soft and quiet, some go with a big bang, Well, it’s way too late for the pearly gates, I’m going down in flames.”

The latter offers a withering put down of an ex-lover. Over a tick-tock rhythm and crackling guitar Isaak regrets their recent assignation.  He offers up this pithy observation:  “Bad ideas are like insects on the windshield of my mind.”

The album closes with “The Way Things Really Are.”  A true tears-in-my-beer-cryin’-over-you lament, it recalls Dean Martin’s “Return To Me” and Marty Robbin’s Spanish-tinged gunfighter ballads.

But, you could pony up the dough for the extended edition. This is highly recommended as it adds five tracks that are definitely all killer, no filler. “Some Days Are Better Than The Rest” sounds like James Bond-meets-Ennio Morricone-meets-Roy Orbison, replete with an “our love is like this dead garden” metaphor and thundering timpani.

“Keep Hangin’ On” is a click-clack Rockabilly rave-up, “Every Night I Miss You More” strikes the right balance between twangy Country Western and a swoony slack-key Hula. “The Girl That Broke My Heart” is the biggest surprise, mining the Baroque Pop sounds pioneered by Love and the Left Banke. Finally, this mini-set concludes with the jaunty boom-chicka boom of “Love The Way You Kiss Me.”

Thirty years in, Chris Isaak continues to ignore prevailing musical trends, his music may not be in vogue, but it will always be in style.