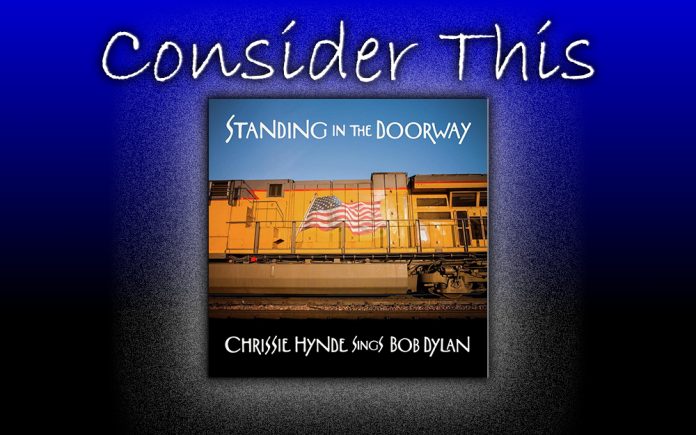 Chrissie Hynde first indicated her affinity for Bob Dylan back in 1994, when The Pretenders covered “Forever Young” on Last Of The Independents album. Born a decade after the Bard of Hibbing, she was besotted by his music early on, so it seems wildly apropos that when Covid 19 hit, Chrissie hunkered down in Maida Vale, England and passed the time by recording her favorite Dylan songs, releasing the results piecemeal, via the interwebs. Now they’ve all been collected for her third solo effort, Standing In The Doorway.

When Chrissie and her band The Pretenders burst on the scene and stormed the charts in 1980, it felt as though they came out of nowhere. But their ascent was decades in the making. An Akron, Ohio native, Chrissie fell in love with Rock & Roll almost immediately, especially once the British Invasion hit in 1964. The Beatles and the Stones became her obsessions. As the years progressed, that list expanded and included The Kinks, The Doors and the Stooges. During her teens, she skipped the usual rites of passage like boyfriends and proms. She didn’t want to date Paul McCartney or Mick Jagger, she wanted to be them.

She attended Art school at Kent State and was on campus when anti-war protests took a deadly and fatal turn on May 4th, 1970. It was during this era that she began to get serious about music. One of her first bands included future Devo visionary, Mark Mothersbaugh.

An avowed Anglophile, Chrissie finally made it to the U.K. a few years after school. Rather quickly she got a job writing for the leading music magazine, the New Music Express (N.M.E.). As soon as she got the lay of the land, she placed an ad in the competing music rag, Melody Maker, looking for like-minded musicians. She briefly collaborated with Jon Moss, Tony James and Mick Jones, all three later skyrocketed to fame in Culture Club, Generation X and The Clash, respectively.

By 1978, she had recorded a demo and hired a manager. She connected with bassist Pete Farndon, drummer Martin Chambers and guitarist James Honeyman-Scott. Inspired, in part, by the classic Platters song, they became The Pretenders. Their eponymous debut arrived in 1980, their sound was a crackling amalgam of British Invasion, Punk and New Wave.

As The Pretenders’ lead vocalist and rhythm guitarist, she flipped the script, redefining the role of front-woman. She wasn’t a boozy, blowzy Blues Belter like Janis Joplin, a Punk-Poet androgyne like Patti Smith, nor was she a Gypsy nymph swathed in silks, crushed velvet and patchouli, a la Stevie Nicks. Chrissie swaggered like Jagger and radiated the smoldering charisma of the Doors’ front-man, Jim Morrison. Sure, she’d strut in her (faux) leather pants, but she wasn’t afraid to appear tender and vulnerable.

Chrissie and Martin persevered, recruiting a new bassist and guitarist. Their third long-player, Learning To Crawl, arrived in early 1984 and became a huge critical and commercial success. By the skin of their teeth, The Pretenders truly triumphed over tragedy. Since then, the band has cycled through myriad line-up changes, with Martin quitting and rejoining a handful of times.

Beginning with 1986’s Get Close, Chrissie and a rotating cast of bassists, drummers and guitarists have released a string of albums under the Pretenders moniker, Packed, Last Of The Independents and Viva El Amor took her through the 20th century, while Loose Screw and Break Up The Concrete arrived in 2002 and 2008 respectively.

When the band took a hiatus, she partnered with J.P. Jones and his ragged compadres, The Fairground Boys. Their alliance yielded one album under the unwieldy title, J.P., Chrissie & The Fairground Boys. 2014 saw the release of her first official solo album, “Stockholm.” Three years later, the latest iteration of The Pretenders recorded Alone, produced by fellow Akron-ite and Black Keys front-man, Dan Auerbach. A second solo album, a mix of Jazz, Blues and Rock standards entitled Valve Bone Woe, arrived in 2019.

40 years after the release of their first record, with Martin back behind the drum kit, the band roared back in 2020 with Hate For Sale. Hailed as their strongest effort in four decades, it displayed the same spiky melodicism that characterized their debut. All revv’ed up and ready to hit the road, the band was waylaid by (you guessed it), the Covid 19 pandemic. Like a kid stuck inside on a rainy day, yearning to play, Chrissie made good use of her down-time by recording her favorite Dylan songs. Very much a homemade effort, the record unfurls slowly, as Chrissie clears her throat, counts to three and launches into a languid version of “In The Summertime.” Acoustic guitars intertwine, shadowing her still-supple contralto through the first verse, as she rounds the chorus, fluttery keys, pinwheeling bass and crashing cymbals are folded into the mix. “…Summertime” was originally found on the 1981 Shot Of Love effort, just as Bob was beginning to emerge from a serious (and controversial) immersion into Christianity, the album signaled a return to form, veering from the sacred to the temporal. Still, lyrics like “Strangers they meddled in our affairs, poverty and shame was theirs, but all that suffering was not to be compared with the glory that is to be/And I’m still carrying the gift you gave, it’s part of me now, it’s been cherished and saved, it’ll be with me unto the grave, then unto eternity” indicate that he was still on a quest for spiritual salvation.

Cover songs can be tricky. No one wants a rote regurgitation of the original version. Clearly, these songs have significance for Chrissie and she has reconfigured them to suit her own sui generis style. She deftly recalibrates a couple of tracks from the 1983 album, Infidels. First up is “Sweetheart Like You,” which, stripped to the bone, becomes a stately piano ballad anchored by flickering acoustic guitars and woozy keys. She easily navigates a blatantly patriarchal narrative intent on rescuing a damsel in distress; “You know a woman like you should be at home, that’s where you belong, taking care for somebody nice who don’t know how to do you wrong/Just how much abuse will you be willing to take, well, there’s no way to tell from that first kiss, what’s a sweetheart like you doing in a dump like this.”

“Don’t Fall Apart On Me Tonight” is powered by gutbucket bottleneck guitar, swirly acoustic riffs, a wash of keys and rippling mandolin runs. We join our program already in progress, as lyrics attempt to forestall a break-up; “I ain’t too good at conversation girl, so you might not know how I really feel, but if I could, I’d bring you to the mountaintop girl, and build you a house of stainless steel/But it’s like I’m stuck inside a painting that’s hanging in the louvre, my throat starts to tickle and my nose itches, but I know I can’t move.” Chrissie’s willowy vocals manage to wipe away a bit of Bob’s bitterness as she quietly implores “Don’t fall apart on me tonight, I just don’t think that I could handle it, don’t fall apart on me tonight, yesterday’s just a memory, tomorrow’s never what it’s supposed to be, and I need you.”

The best tracks here find Chrissie hopscotching through eras, tackling Dylan deeeeep cuts rather than covering more obvious hits. “Love Minus Zero/No Limit” stretches back more than 55 years to the “electric” side of his Bringing It All Back Home record. A painterly ode, her version hews closely to the original arrangement. Incandescent mandolin and high-strung guitar lattice over sparkly keys and a relaxed rhythm. Although there’s no chorus to speak of, the melody meanders sweetly as Chrissie waxes rhapsodic about a muse who sounds too good to be true; “My love, she speaks in silence, without ideals or violence, she doesn’t have to say she’s faithful, but she’s true like ice, like fire.” Courtly, finger-picked guitar and reedy accordion adds some continental heft. The outro weaves a tapestry of guitar and accordion with sylvan bird sounds and a revving and rumbling motorbike.

Jumping ahead 10 years and 10 albums later she puts her imprimatur on “You’re A Big Girl Now” from Blood On The Tracks. That muse has moved on, and the song is suffused with tenderness, heartache and grief. Achingly pure mandolin coils around up-close and intime vocals, filigreed fretwork and plangent piano. Softly teasing out each verse, Chrissie is equal parts contrite and confused, hoping for a second chance; “A change in the weather is known to be extreme, but what’s the sense of changing horses in midstream, I’m going out of my mind, oh-oh, with a pain that stops and starts, like a corkscrew to my heart, ever since we’ve been apart.”

Fast-forward to 1997 for the title track, which originally appeared on the late-career renaissance record, Time Out Of Mind. In Bob’s hands, this croaky-lonesome dirge felt sepia-toned, awash in bitterness and regret. Chrissie recasts the song as a technicolor lament. Churchy piano chords are matched by piquant guitars, shimmering keys and her authoritative contralto. Resigned and world-weary, the lyrics retain a glimmer of hope; “I know I can’t win, but my heart won’t give in, last night I danced with a stranger, but she reminded me that you were the one, you left me standing in the doorway cryin,’ in the dark land of the sun.” Clotted keys and elegiac guitars are leavened by a sleigh bell shake, paring down to a gentle acoustic strum and Celtic-flavored whistle. Finally confiding “It always meant so much, even the softest touch,” before being vanquished by the song’s closing verse; “See, nothin’ to be gained by any explanation, there’s no words that need to be said, you left me standing in the doorway cryin’ Blues wrapped around my head.”

Other interesting tracks include an ambitious take on Bob’s early ‘80s masterpiece, “Blind Willie McTell” and a feathery version of the lovely but obscure “Tomorrow Is A Long Time.” The record closes with “Every Grain Of Sand” a mid-period classic from the Shot Of Love album. Liquid guitar arpeggios partner with sturdy piano notes, but quickly cede the spotlight to Chrissie’ contemplative vocals. Dylanologists have spent decades trying to decipher the dense ruminations contained within. But she seems content just to wrap her pliant contralto around majestically constructed couplets like “Oh the flowers of indulgence, and the weeds of yesteryear, like criminals they have choked the breath of conscience and good cheer/The sun beat down the steps of time to light the way, to ease the pain of idleness and the memory of decay.” The record was produced by Pretenders guitarist James Walbourne and Tchad Blake (who has played with everyone from Crowded House, Elvis Costello, Fiona Apple, Tom Waits, Los Lobos, T-Bone Burnett and Ani Difranco). While Chrissie concentrated on vocals and guitar, James added piano, keys, acoustic guitar, high strung guitar and backing vocals. Tchad provided additional keys and percussion. There aren’t too many artists that can manage the grit, gravitas and chutzpah salted in the mix of most Dylan songs. (Case in point, Billy Joel’s execrable read of “To Make You Feel My Love” or Guns N’ Roses flippant version of “Knockin’ On Heaven’s Door). Chrissie Hynde’s approach is deft and nuanced, as a result Standing In The Doorway is lean and unfussy, eloquent and slightly cranky. Exactly as it should be.