Some seasonal thoughts on the sacred and the profane

Before recorded history, there’s little doubt that our ancestors celebrated and probably sacrificed their kinsmen, virgins and enemies (among other living things) at the time of the winter solstice. This was done in the hope that the “sun would return” and once again the land will blossom. Every once in a rare while, the longest night of the year included a total lunar eclipse. That must have been an extraordinary thing to experience at Stonehenge with one’s fellow pagan brethren.

In the 4th Century when pagan Rome was in a time of supremacy, Emperor Constantine had a vision of a gleaming cross against the sun. He converted to Christianity and conveniently layered ancient holy days with a patina of Christian meaning, thus making it easier for the Roman hoi polloi, many of whom had already converted to the new religion, to also surrender to his now righteous rule as a representative of The Christ, King of Kings, Creator of the Cosmos. Make no mistake, the Roman Empire is alive and well and still rules millions from before birth to beyond the grave. We crave our stories, superstitions and myths. Without a shared narrative, how else do we derive meaning for our lives? When our stories die, we die.

An alternate god of sorts, Santa Clause has firmly embedded himself into our pop culture and contemporary solstice and Christmas festivities. You don’t have to be a Christian to beg from Santa. In fact, Christmas (without Christ) is a big deal in such “unChristian” places as Japan and Abu Dhabi. All the accouterments of the westernized secular celebration are intact — from Rudolph to Frosty (just no manger and infant Jesus).

Father Christmas is a different figure than our traditional Santa. Tall and thin, his home base is Eastern Europe. But what’s really interesting is that the source for the St. Nick figure (who is now indelibly merged with Santa in our secular western imagination) was in fact a real person from the 4th Century. Bishop Nicholas of Myra was a Greek who served in Asia Minor. Not much is really known about him but numerous miracles are attributed to him. He was a patron saint to sailors and was rumored to hold a lamp along rocky shorelines during storms to guide men at sea safely home.

I am not aware of any attempt to film this legendary story of what could be the greatest Christmas movie yet — “The Man Who became Santa Clause,” you read it here first.

The journey of the Magi to Bethlehem is the subject of the great Italian artist and filmmaker Ermanno Olmi’s 1982 epic tone poem KEEP WALKING (CAMMINA CAMMINA). Shot in Northern Italy in rustic and rural locations and filled with amateurs, this magical film is spiritually rooted in a way that is open to all faiths. Or to those with no faith. I was reminded at times to Chaucer’s “Canterbury Tales” as the Magi interact with a caravan of soldiers, merchants, villagers and assistants following in the direction of a comet.

In my opinion, the best Santa movie is BAD SANTA starring Billy Bob Thornton as a profane, angry, cynical, doomed alcoholic thief who finds the meaning of an authentic Christmas spirit in the unconditional love of a fat, bullied boy. The movie is a masterpiece but certainly not for all tastes. Three editions of the film exist including BAD(DER) SANTA.

Although a plethora of movies dealing with Christmas permeate our culture, minds and libraries, many – if not most – are silly, insipid and worse. But there are a few that stand out for reasons that may not at first be obvious.

I think the most artistic and notable nativity scene is in the opening of BEN HUR (1959). Almost medieval in its stately reverence, there is a power in the iconic images of a babe in a crude manger with royalty kneeling and bringing golden gifts. The late Robert Ayres, a prolific studio artist who also created the iconic Bonanza burning map logo, designed much of the sequence.

Catherine Hardwicke, an accomplished Production Designer and director of THIRTEEN and TWILIGHT, helmed THE NATIVITY STORY (2006) a dramatic and richly designed film devoted to the birth of Christ. A seemingly adolescent Kiesha-Castle Hughes nicely plays Mary. The young actress was in fact actually pregnant at the time.

For many, the best Jesus movie is the Russian made MIRACLE MAKER, a stop-motion puppet film that is a wonder to behold. Ralph Fiennes performs the voice of Jesus in an understated, compassionate tone that is humble and powerful. Other distinctive voice talents include Julie Christie, Alfred Molina and William Hurt.

Another inspired version of Scrooge’s harrowing journey toward of self-worth and forgiveness is also from Disney. Check out MICKEY’S CHRISTMAS CAROL for an old school animated look. At the time of its release, there was concern from some parents – and then the studio — that it was far too scary for young kids.

Probably the most critically lauded version of Dickens’ classic tale of redemption is the 1951 production starring Alastair Sim as Scrooge. You might remember him and his bad teeth in the original LADY KILLERS. If you have never seen this version C.C., it is now a fully restored Blu-ray disc and worth finding for the permanent library of holiday films. 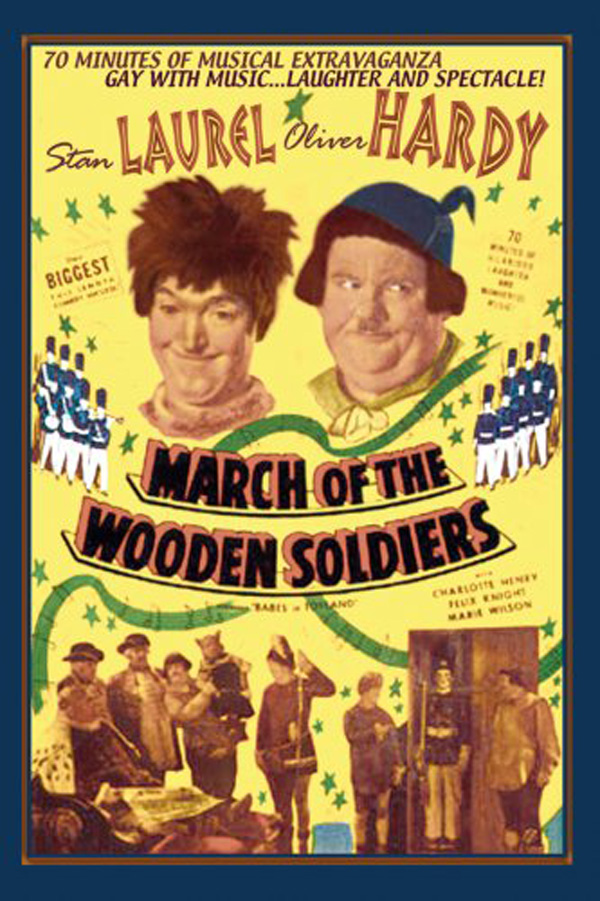 On the far end of the musical movie spectrum is the colorized Laurel and Hardy MARCH OF THE WOODEN SOLDIERS from 1934. Adapted from Victor Herbert’s operetta “Babes in Toyland,” there’s more of the Holiday Spirit in this 1934 classic than in most of the insipidly lame attempts of movies that exploit the holiday season.

Dum (Stan) and Dee (Ollie) are Santa’s toymakers preparing for the big delivery on Christmas Eve. Mother Goose and nursery rhyme characters are all over the place and Stan and Ollie are in constant trouble (“Is that 100 six-foot toy soldiers or 600 one-footers?”) Silas Barnaby, (remember “the meanest man in town”?), Bo Peep (she’s being forced into marriage by Silas or he will evict Bo’s mom, who is in fact The Old Woman In The Shoe). And there’s Tom Tom the Piper’s Son (Ms Peep’s true love) and the big finale with the creepy attack of the Bogeymen.

This classic has been cleaned up, digitally remastered and colorized and looks about as perfect as the best of old style children’s book illustrations and I bet Stan Laurel and Oliver Hardy themselves would approve. Stan once said he regretted they couldn’t shoot this in color. It’s certainly no sacrilege. This is one beautiful, Fauvistic fever dream of a movie and a weirdly mesmerizing treat.

For those who dare to read between the lines (or movie frames), this film can be seen as a subversive horror fest that plumbs deeply disturbing psychological and political rarely touched on in contemporary films. It is amazing to me that someone hasn’t examined this in detail. I have often wondered how much of it may have been intentional — perhaps from the brilliantly demented mind of Stan Laurel. Only on the surface can this be considered a children’s movie. There’s a saying: “Clowns in clown’s clothing is no laughing matter.” 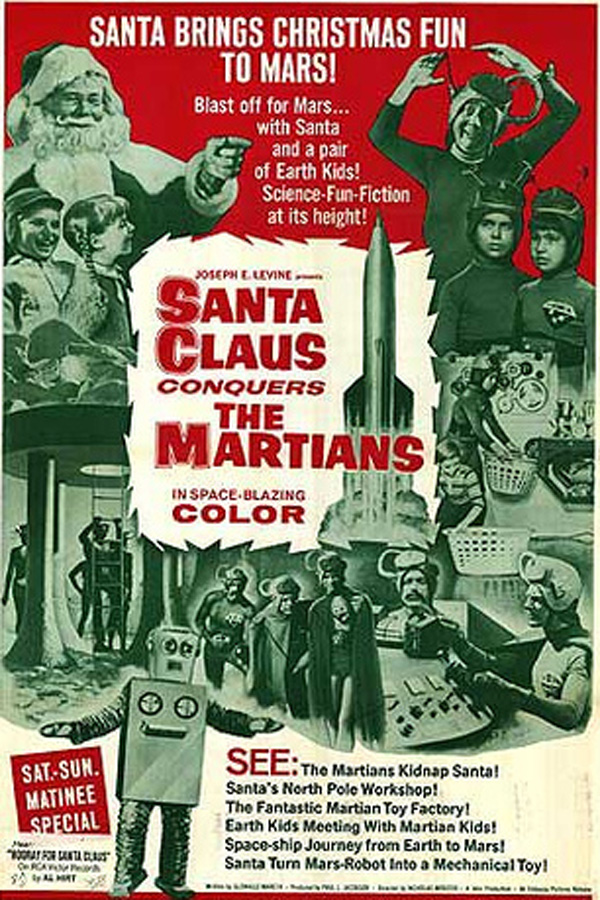 For those who only see this season as a self-aggrandizing exercise in greed and hypocrisy, I suppose movies like SANTA CLAUS CONQUERS THE MARTIANS are a fitting reminder of the goofy madness of the forced celebration. I know some people who have an annual anti-Christmas cocktail party with Pia Zadora’s bizarre flick looping silently on a big screen.

However, if you want a vivid reminder of what came of the life of the historical child born (probably in the Spring) in a barn in Bethlehem, take a look at History Channel’s IS THIS THE FACE OF JESUS?

A computer artist reconstructs the body and face of the Shroud of Turin and vividly resurrects it. Since this season is at heart a celebration of life’s inherent magic, why not embrace the notion that it’s all a miracle. Open your eyes to wonder and awe.

ELYSIUM and THE LONE RANGER.

Don’t miss these recommended year-end treats on the big screen: HOBBIT – The Desolation of Smaug, NEBRASKA, SAVING MR. BANKS, THE SECRET LIFE OF WALTER MITTY, INSIDE LLEWYN DAVIS and HER.

At Cinemas Palme d’Or on Saturday evening, December 21, there will be a screening of the already acclaimed LONE SURVIVOR with guests including producer Randall Emmett. Check theater for details. 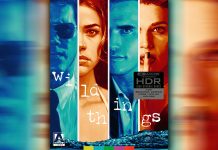 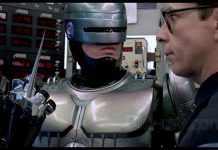 4K BOT COP IS ON DUTY 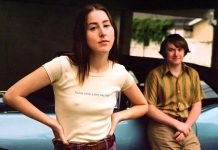 NEW TO OWN FOR THE HOME THEATER