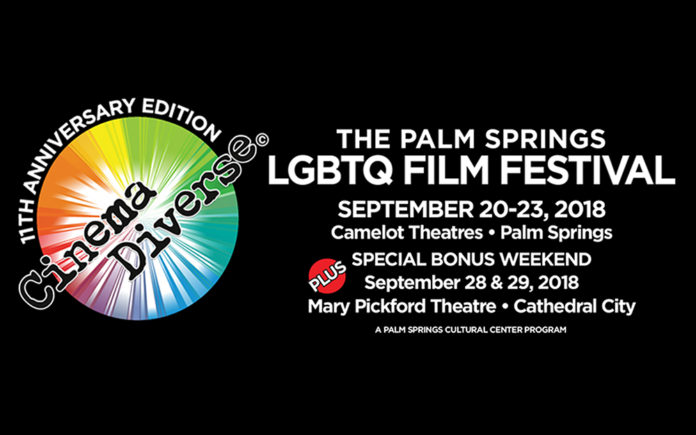 In 2007, as California was on the precipice of an era that would recognize marriage equality for the LGBTQ community, (May 2008 – In re Marriage Cases) and then deny marriage equality (Proposition 8, November 2008,) Palm Springs joined the world wide movement to produce a Festival that would present films that depicted LGBTQ characters and stories in diverse, positive and realistic terms. They called it, Cinema Diverse.

Films such as those presented at Cinema Diverse are critical in their representation of the LGBTQ community, a seriously under represented population.  In 2017 the Gay and Lesbian Alliance Against Defamation, (GLAAD) released a study that revealed some very sad statistics for LGBTQ characters in mainstream films.  Of the 125 releases from major studios in 2016, only 23 of them, or 18.4%, included characters identified as LGBTQ. Of those characters, gay men are (still) by far the most represented group, at 83%. Bisexual representation appeared in 13% of the inclusive films, while lesbian representation rose from 23% in 2015 to 35%. Transgender representation was the lowest of all.  These statistics show the vital need for festivals that promote representation of a community that is frequently overlooked in the telling of mainstream stories. 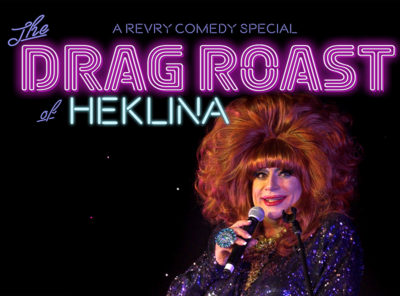 Kicking off its eleventh season this year, September 20th – 23rd, Cinema Diverse Palm Springs, has worked hard to become a front-runner in progressive representation and diversity.  Their mission is to produce an LGBTQ Film Festival that is dedicated to advancing and further strengthening the diverse gay community through the establishment of a world-class film festival that presents lesbian, gay, bisexual and transgender cinema from around the world.  Since 2007 it has continued to build on this mission and has become one of the top festivals in the country.  The Festival will be held at the Camelot Theatre in the Palm Springs Cultural Center, founded by long time Coachella Valley residents and philanthropists, Ric and Rozene Supple. 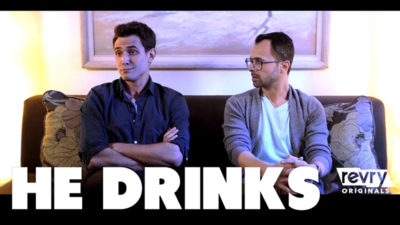 At the helm of the festival is Managing Director Michael Green, who continues to present an abundance of quality films in the festival.  This year’s festival opens with “A Long Road to Freedom: The Advocate Celebrates 50 Years,” Actress/Activist Laverne Cox, narrates this documentary, with music provided by Melissa Etheridge. The Advocate began its publication in 1967 and has chronicled the history and movement of the gay and lesbian community since before the Stonewall Riots in 1969. 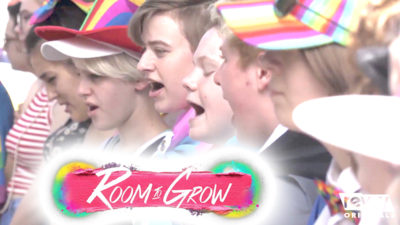 In 2016, in partnership with Cathedral City, Cinema Diverse expanded its festival to include a second weekend of films, that will this year be presented on September 28th and 29th at the Mary Pickford Theatre.

An exciting major sponsor and contributor to this year’s Cinema Diverse is Revry tv. Revry, kicked off their service in 2016 and bills themselves as the first queer global streaming app.

In an interview with the LGBT Foundation, Cofounder and CEO Damian Pelliccione stated that, “Revry is the first global LGBTQ streaming platform. We are first to market, direct consumer on Apple TV, Chromecast, Roku, Android, iOS, the web, etc. Essentially what we are is the largest LGBTQ content and music library in the world. We have movies, TV shows, feature films, short form digital series, short films, podcasts, music videos and collections, just so much amazing content that truly reflects the identity of the LGBTQ community. It reflects all gender identities, races, sexual orientations, cultures, languages, backgrounds — you name it. It has a very international appeal.”

Their website, (https://revry.tv) presents a plethora of films, series, music and podcasts.  Revry has a dozen films and segmented series presented in this year’s Cinema Diverse.

Everyone needs to see their selves reflected in stories, characters and plotlines.  It validates lives and lifestyles and sustains the overall wellbeing and acceptance of diverse people in a world that often strives to assimilate the masses into a collective hive.

For a complete festival listing and to purchase tickets, please visit: https://palmspringsculturalcenter.org/programs/the-palm-springs-cinema-diverse-lgbtq-film-festival