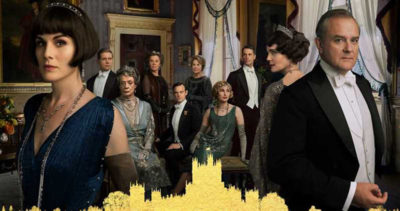 The Crawleys and their devoted staff prepare for the biggest event in their lives as they prepare for the royal visit of England’s King and Queen, not knowing what scandals, romance and intrigue the event will unleash and how it will impact the future of Downton.

If you have been a fan of the six season-show, this lavish big screen edition delivers just about everything (with the exception of Lilly James) you want and expect all made even more majestic on the large theatrical screen.

This beautifully rendered, elegant and satisfying, film stands on its own even if you haven’t followed the series. Recommended. 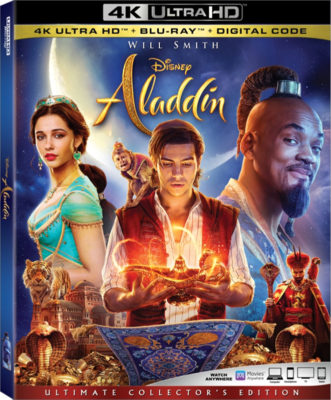 The live-action adaptation of Disney’s animated classic gets the full 4K UHD treatment, but does it make the movie experience better? Not really.

There was something cheap looking about the sets and the entire production. And worse, there’s little chemistry and no sparks between the two leads. Mena Massoud does his best to at least hit his marks as he goes through the motions of the “lovable street rat.” English actress/singer Naomi Scott’s Princess Jasmine is pretty and can carry a tune. But there was something missing. Will Smith is disappointing as the weirdly bulked-up, hulking Genie. He’s no Robin Williams when it comes to delivering manic, improvised riffs. Guy Ritchie directs without the insight and energy we’ve come to expect. Even the money shot of the romantic flying carpet sequence and song is sadly lacking when compared to the beloved animated version. Nice box art though.

Extras illuminate a whole new world behind the scenes including on-set visits with Will Smith, Naomi Scott, Mena Massoud and guy Ritchie, a deleted song, several deleted scenes and not so funny bloopers. Disney. 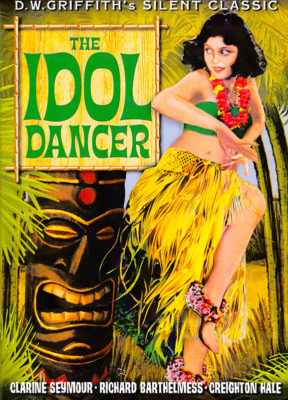 The main appeal of this film is as an historical artifact. It was shot just over 100 years ago! The print is not great, but it is watchable enough to glean the story.

On a remote South Pacific island, the natives are torn between two opposing groups of white colonizers: the missionaries who want to convert them and the slave traders who want to condemn them to eternal servitude.

Chosen to star was 21-year-old Clarine Seymour. Tragically, a few weeks after the movie was released, Clarine died – the cause given “strangulated intestines.” At the time, many thought Clarine could be as big a star as Clara Bow.

Movie magazines of the era claimed that Griffith and crew were lost at sea for three days. But this was most likely a publicity stunt. DVD. Alpha Video.

Now on hi-def Blu-ray, the director of the groundbreaking Oregon Trail epic The Big Trail (1930) returns to the rugged frontier and serves up the rousing tale of a cross-country cattle drive fraught with danger, frisky with romantic rivalries and entanglements and loaded with action. The nice-looking widescreen frame is filled with a succession of panoramic scenes of often stunning beauty.

Directed by the masterful Raoul Walsh and adapted by top screenwriters Sydney Boehm and Frank Nugent. Ex-Confederate brothers (Clark Gable and Cameron Mitchell) form an alliance with a shady businessman (Robert Ryan) on a perilous cattle drive across 1,500 miles of hostile territory from Texas to Montana, and an even more treacherous rivalry for the affections of a feisty frontier woman (Jane Russell).

Filmed in Cinemascope and scored by Victor Young, whose rousing work is available on an Isolated Music Track. Twilight Time Movies Limited Edition. 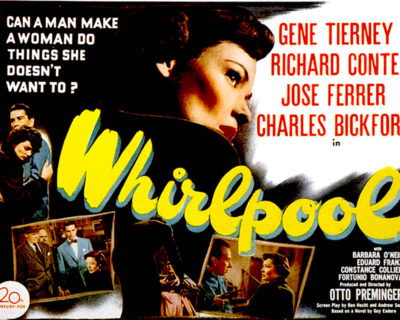 Mind games, both for its characters and the audience, fuel the suspenseful melodrama of this noir thriller reuniting director Otto Preminger with his Laura star Gene Tierney, giving one of her best performances as a mentally troubles socialite caught shoplifting – and ensnared in the dark scheme of a manipulative astrologer/hypnotist (José Ferrer to frame her for murder.

Written for the screen by Ben Hecht (Spellbound) and Andrew Solt (In a Lonely Place) and hauntingly scored by another Laura veteran, the great David Raksin, Twilight Time Movies Limited Edition (only 3,000 units).