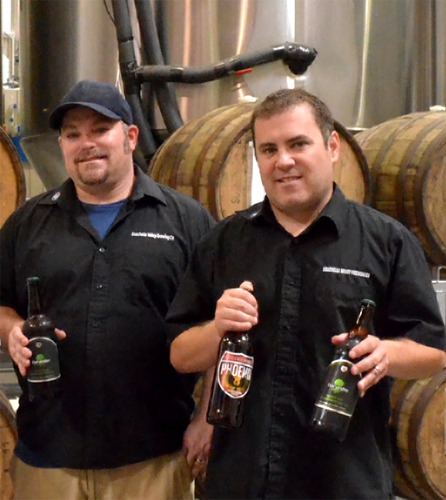 Coachella Valley Brewing’s CEO David Humphrey plans to step down to further pursue his expanding law practice and have more time devoted to his family.  David co-founded the Coachella Valley Brewing Company with Brewmaster Chris Anderson in 2013 and has been the acting CEO since the breweries inception. David feels it’s time for a new CEO that’s focused solely on the brewery’s success.

“I am very proud that I was an integral part of getting the brewery to the level where we are now and it’s time for a new CEO to take my place and take us to that next level. As much as I love the brewery, I have obligations to my growing and demanding law practice and family. We know there’s the right person out there to fill my shoes and we’re excited about finding that person and continuing to grow the Coachella Valley Brewing Company Brand.”

The CVB Board of Directors will continue to be staffed by owners & team members of the brewery and COO/Brewmaster Chris Anderson will be assuming both roles until the brewery finds the right fit for their future growth and market plans.

Chris commented that “Dave and I started this brewery together and we both have always wanted the same thing for this brewery. Stepping down doesn’t mean stepping away from the company completely. Dave and I still discuss brewery strategy almost every day. He will remain on the board and will be an active participant during our search. So, for us it’s business as usual and there’s always lots of beer that needs to be brewed to fill our orders and the thirst for CVB products. Right now we’re focusing on keeping up with the demand and growing at a healthy pace. It’s a good problem to have, so we’re excited to find the right person for this position.”

Coachella Valley Brewing Co. continues to expand and is expecting double digit growth in the next year. The brewery’s sales in the Coachella Valley are up 168% over last year.

Coachella Valley Brewing Company is recognized nationwide for their uniquely desert farm to glass beer concepts; barrel aged brews and sour ales. Recent releases of two of their prized Bourbon Barrel aged Stouts, Black Widow and Whopper nearly sold out so put it on your list to stop by grab a bottle or glass. The tasting room is open daily and the brewery is at 30-640 Gunther St, Thousand Palms, CA 92276.,

We will celebrate this amazing 3 year ride on October 29th, with Oktoberscare our Halloween Oktoberfest celebration at the brewery, tickets are on sale now. We will have prizes for most original, scariest, and sexiest costume. We will be releasing our Oktoberfest Lager and selling half liter CVB souvenir boots. There will be a beer chugging and the keg tossing contest as well as Polski Sausage Co. who will be on hand with some outstanding food. 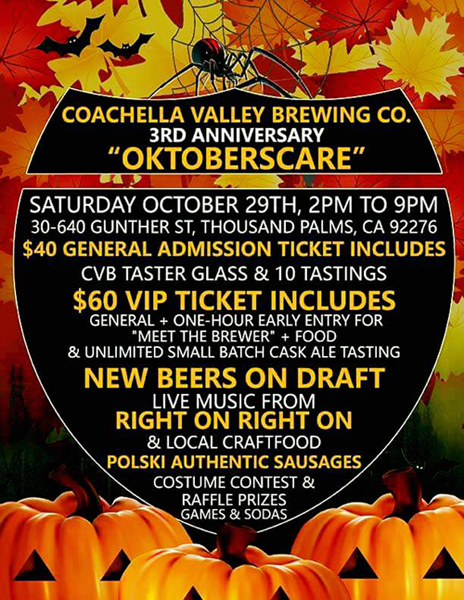