Marie Osmond will take the stage at Fantasy Springs Casino in The Special Events Center this Saturday, April 4, 2015, at 8 p.m. She has produced a new “One Woman Show” that is certain to touch the hearts of her loyal fans. The reviews have been outstanding and, as a fan, it is nice to know the Coachella Valley, along with a few other locations back east, is part of her new endeavor, as she is testing the show, re-writing and changing it to fit the different audiences.

“The venue is very intimate,” said Marie Osmond, “I specifically chose smaller venues because of the way the show is done. It’s a very different show than Vegas.” There are places in the show where she needs a partner, so she included her nephew, David Osmond, her brother Alan’s son. “He is a very talented kid and his story is phenomenal. He was Donny’s understudy in Joseph and the Amazing Technicolor Dreamcoat, for Andrew Lloyd Webber, he’s terrific.”

Like Marie, David started singing at a young age with his brothers. He was the lead singer in the group the Osmond Boys. YouTube has performances and television interviews from the entire Osmond Family, may I suggest you take a moment to watch them. Marie has an eclectic voice and can sing a lot of different styles. “David is the only other Osmond who can sing different styles, like me, that’s why I brought him.”

Every song in the body of the show was hand chosen by her. “You’ll hear my music; some of the hits you’ll want to hear and the stories behind them; you’ll hear new music; you’ll hear music that has touched my heart and why; we are all the same; we’re all going through this experience called life. God doesn’t care what we do, He really doesn’t. He cares how we do it and how we get through it.”

During the show, Marie will share stories of her experiences in life with the audience and point out the importance of “giving back” to the community. Being a woman that has grown up in the music business, and who has worked consistently for the past five decades, is very unique. “I will talk about things that have kept me moving forward when everybody has said, ‘no’. I have never done a show like this before.”

One story Marie shared during the interview was of a 25 year old girl, who was kind enough to bring a 60 year old woman, who she helps, to see the show. At the “Meet and Greet” following the show, she told Marie that she was now a new fan of Marie Osmond. “She was so sweet, it was darling. It has been a really enjoyable show for me to do.”

Now in their seventh year performing to sold out audiences at The Flamingo Hotel in Las Vegas, Donny and Marie have both decided to take some time off to spend more time with their families, as well as, doing other creative projects. She is touring with her solo show; recording a new album; writing her fourth book destine to be on the New York Times Best Sellers List as were her previous three books; a nationally acclaimed public speaker; continue to be one of the top doll designers in the world; and enjoying time with her husband, Steve Craig, her children and being a grandma, or shall we say, “GlamMa” as she is affectionately known.

“I promise it will be a fun evening. Just come and let’s all sit around the campfire and read a book,” as she giggles enthusiastically. “It’s the kind of show where I want to say ‘thank you’ to all my fans. Music is powerful to me and hopefully they will understand me better after the show.” 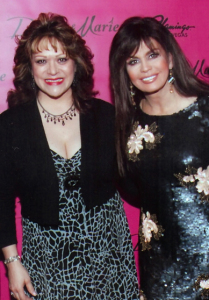